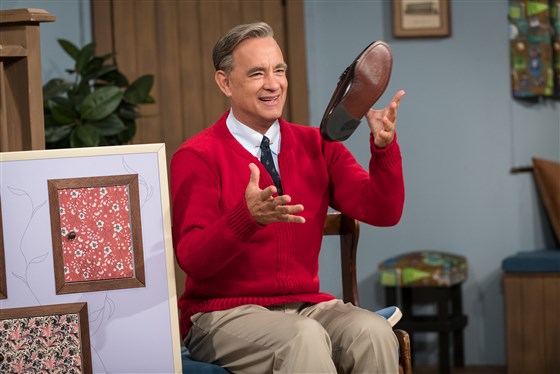 'A Beautiful Day in the Neighborhood' opened up with Tom Hanks singing the theme song of the beloved series, 'Mister Rogers' Neighborhood.'

While zipping up his bright red sweater and tying his shoes, Mister Rogers sang directly to the camera, just as he always did in the children’s television series, “Mister Rogers’ Neighborhood,” as the new film, “A Beautiful Day in the Neighborhood,” began.

As the opening continued, the feeling of nostalgia took over, watching Fred Rogers, both the host and creator of the television series that aired from 1966 to 2001 on public broadcasting, sing his theme song. After he finished singing, Rogers, played by Tom Hanks, began talking to the viewers about his new friend, Lloyd Vogel.

Vogel, played by Matthew Rhys, is a character that represents Tom Junod, a journalist from “Esquire” magazine, that was given the task to profile Mister Rogers for the upcoming edition all about heros in 1998. Writing a profile story was unlike Vogel’s writing style, but after meeting with Rogers for the first time, Vogel soon became obsessed with interviewing him in order to try to figure out who the true Rogers is.

Marielle Heller, the director of “A Beautiful Day in the Neighborhood,” helped create a movie that showed who Fred Rogers was beyond what he portrayed on screen as “Mister Rogers” and she helped prove that he truly is a sensitive and patient man through his interactions with Vogel.

Rogers looked past Vogel’s sarcastic remarks and attempted to get to know Vogel to understand where his skepticism comes from. Hanks portrayed Rogers’ patience and calm demeanor in a dramatized form, demonstrating that even though Vogel was skeptical at first, he soon seemed to learn that Rogers truly cared and wanted to help him learn how to properly act out his feelings.

While “A Beautiful Day in the Neighborhood” tells the story of Rogers and Vogel’s  relationship, Heller also used the childlike aspects of “Mister Rogers’ Neighborhood” that were loved by viewers. Some of these were the make-believe characters, props that helped to bring about the message he wanted to convey to his audience and the toylike miniature buildings, cars and planes to bring about to another level that the place where the movie is taking place is changing. The elements from the classic television show helped to bring about who  Rogers was as a person and how he was able to change Vogel’s mindset in a positive way.

The little elements from “Mister Rogers’ Neighborhood” helped to make the movie be structured just like a typical episode of this series. However, the concept and lesson that was conveyed throughout the movie is too mature for children to be able to understand. This was for Vogel to try to move past the rocky relationship he had with his sick father and try to make most of the time he had left with him. This is what helped set apart the series from telling the story of how Rogers was able to positively impact and educate adults as well as teaching children to be the best version of themselves.

While Rogers showed patience and genuine sincerity toward adults and children, nobody is perfect and that is what Joanne Rogers, Fred Rogers’ wife, wanted the movie to show.

“The only thing that’s important to me is that you don’t make  (Rogers) into a saint,” Joanne said to Noah Harpster and Micah Fitzerman-Blue, screenwriters of the film. “Because if you make him a saint, then what he does seems unattainable. I want you to know that he worked at it every single day.”

While not entirely perfect, Harpster and Fitzerman-Blue still wrote a movie that got to teach everyone — children, adults and teenagers — how to be kind, and that it is OK to show your true emotions.