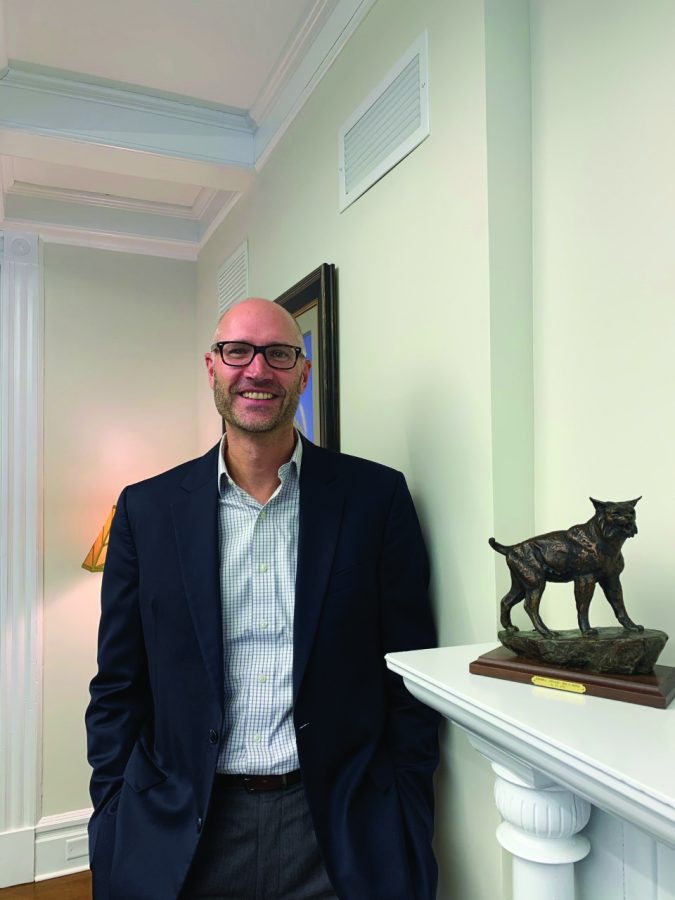 Richard comes from a diverse background of public relations, journalism, marketing and communications. He received a Bachelor of Arts in journalism from Marist College, and became a political reporter for the Congress Daily after graduation. He eventually evolved to serving as the director of communications at the nonprofit association, Senior Executives Association. He also got involved with a global public relations firm called Weber Shandwick and became the vice president of communications at UnitedHealthcare.

“I’m hoping that I can take that collective experience that I’ve had in all these different areas and figure out how to best apply them to Quinnipiac,” Richard said.

He related his personal career journey to Quinnipiac’s growth. He said that he sees similarity between his diversity in communications over the years and the university’s growth in the diversity of academic programs, campus expansion and various other aspects. Richard will be working closely with John Morgan, associate vice president for public relations. Morgan said he works well with Richard.

“I really enjoy working with Daryl, who is a terrific addition to the university’s management team,” Morgan said. “His extensive experience in public relations, marketing and communications made him the ideal candidate for the position.”

Richard said he is ecstatic about beginning his journey at the university and plans to add onto the growing reputation of Quinnipiac. He said he comes to work everyday looking for ways to evolve the university.

“One of my top priorities is to listen to as many people as possible to hear what everyone’s needs are, what has been done in the past, and what’s the ambition moving forward,” Richard said.

Another one of Richard’s goals is elevating Quinnipiac as a national brand. He said that he seeks for people to know about the university from coast to coast.

“President Olian, faculty and administrators have done a great job in developing a strategic plan and laying the framework on how to raise the statue of the university to become a national competitor,” Richard said. “There’s exciting work ahead that I believe my team and I can do.”

In his short time on the job, Morgan, who has worked at Quinnipiac for 23 years, said Richard has already gotten straight to work.

“He has adjusted to his new role tremendously well and has already made a very positive impact on our division,” Morgan said. “I am looking forward to what the future holds under his leadership.”

Since he became involved with the university, Richard said that Quinnipiac’s positive momentum has been infectious.

“I think there’s been a lot of great work done by this team. There’s this treasure trove of great stories that I will continue to push out there,” Richard said.

Lynn Bushnell held Richard’s position for 25 years before her retirement. Although Richard never personally knew her, he said he is impressed with her work and believes that she contributed to a large amount of Quinnipiac’s success.

“She was here during the tremendous amount of growth of the university, and I’m grateful that there’s solid members of her team who have that institutional knowledge,” Richard said.

One of Richard’s goals is to create connections with students and the university as a whole.

“At the end of the day we’re all here to help students prepare for the workforce and tomorrow,” Richard said. “I want to help students become the most prepared and set them up for the most success after Quinnipiac.”

Establishing relationships with all of the students and helping them through their journey at Quinnipiac is one of Richard’s main priorities.

“One of the reasons that I was most excited to come to Quinnipiac was to be able to work a lot with different students and organizations,” Richard said.“I look at my role as a resource in helping students in student media.”

With his large background in communications, Richard said that his former experiences and degree will be a great addition in helping students.

“I want to help as much as possible to be a mentor to journalism and communication students,” Richard said. “I’m always happy to drop my own experiences and relate to those trying to figure out their own career track for them.”

Richard said that his experience at Quinnipiac so far has been nothing but great.

“I am optimistic not only about my teams work, but where this university is headed,” Richard said. “This is a university on the rise.”