A new era of quarterbacks

Breaking the mold; Lamar Jackson is the NFL MVP 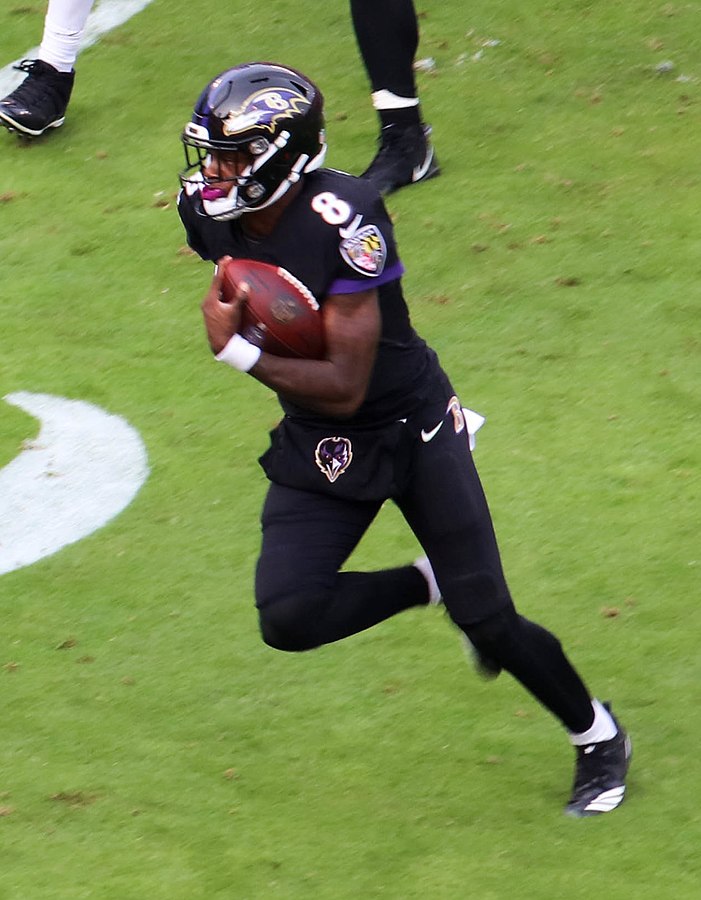 Lamar Jackson running with the ball against the Cncinnati Bengals.

Watching Baltimore Ravens quarterback Lamar Jackson play is like playing “Madden NFL 20” on your Playstation 4 as you toy with defenders before you escape pressure and score a touchdown. It’s such a joy to watch.

Jackson is currently the front-runner for the NFL MVP award with 1-3 odds according to oddsshark.com in his favor as he leads the 9-2 Ravens towards the playoffs. He has emerged as one of the best quarterbacks in the league, passing for 2,427 yards and 24 touchdowns while throwing only five interceptions. While the yardage total does not seem that high, it would be entirely unfair to not mention his 876 rushing yards, which is the most at his position, as well as his six rushing touchdowns.

His talent is undeniable. Despite working with a subpar receiving core of raw rookie Marquise “Hollywood” Brown (519 receiving yards) and solid tight end Mark Andrews (643 receiving yards), Jackson has led the team to the second-best record in the AFC as of Week 12.

Lock this man in for the MVP. He has overcome challenge after challenge since he left the University of Louisville.

Jackson won the Heisman trophy in college after throwing for over 3,600 yards and rushing for over 1,600 yards. His tape showed generational speed and athleticism behind center. NFL analyst Lance Zierlein gave him the comparison we all saw— Michael Vick, one of the best mobile quarterbacks to play the game.

Yet he was the fifth quarterback taken off the NFL’s draft board. Baker Mayfield, Sam Darnold, Josh Allen and Josh Rosen were all taken over 20 spots before Jackson.

He was a great player to watch on film, but scouts were worried. A rushing quarterback listed at 211 pounds whose completion percentage was under 60% each of his three years in college. More notably, a black, mobile and non-traditional quarterback.

The traditional quarterback model is a tall, strong pocket passer and throughout history, more often than not, white. Look at quarterbacks Ben Roethlisberger, Andrew Luck or Aaron Rodgers as examples. Critics went as far as to even call Jackson, a person who won the Heisman for passing, a wide receiver. Bill Polian, a former general manager that helped build the Buffalo Bills as a Super Bowl team back in the 90s, albeit a losing effort in each of the four visits, was one of the more vocal voices against Jackson continuing his career as quarterback before the draft.

At the time and now looking back two years, Polian’s words were absurd.

Jackson had to overcome the most extreme criticisms despite being one of the most electric quarterbacks to come out of college in recent years. We have not seen a player like this since Vick or Donovan McNabb. Yet, because he was an untraditional quarterback, Jackson slipped until the Ravens traded back into the first round to take him 32nd overall.

He still was expected to sit behind a decrepit Joe Flacco for a year. After Flacco was awful (to no one’s surprise), Jackson took over and led the Ravens to a playoff berth. With a second year to change and adapt to a new system around a mobile quarterback, people had hopes Jackson would take the leap as a passer and help the Ravens return to Super Bowl contention.

He has. And Jackson is now the front-runner for the MVP award in the tightest race we have seen in recent years.

He is not without stiff competition. Seattle Seahawks quarterback Russell Wilson is Jackson’s biggest opponent. Wilson is an undeniable talent, throwing for 2,937 yards, 24 touchdowns and only three interceptions, adding 271 rushing yards and three touchdowns on the ground. Wilson’s Seahawks are now 9-2, and he just became the first quarterback ever to have a winning record in his first eight seasons.

The Houston Texan’s Deshaun Watson and the Kansas City Chiefs’ Patrick Mahomes are other names to watch at the quarterback position. It would also be unfair to completely rule out New Orleans Saint wide receiver Michael Thomas or Carolina Panther running back Christian McCaffrey.

But at the end of the day, this is a two-horse race. Wilson vs Jackson.

Wilson may be a beast, but Jackson is the MVP.

He’s a playmaker and a winner. No one can deny that now. But that can be said of both quarterbacks. Look at Russell Wilson’s perfect pass to Malik Turner off of a flea flicker in Week 12 or Jackson’s unbelievable run against the Texans in Week 11.

But the difference is in the way Jackson plays the game. Make all the comparisons you want but he is a whole different beast. Jackson is on pace to break Vick’s record 1,039 rushing yards and become the second quarterback ever to go over 1,000 rushing yards.

Jackson is the ninth highest rusher in the NFL. That includes running backs, the guys that rush for a living. He has 458 more rushing yards than the next quarterback (Arizona Cardinal Kyler Murray) and is just four yards shy of overtaking Seattle Seahawks running back Chris Carson, who has 84 more attempts than Jackson.

In a race as tight as this, broken milestone records like that makes the difference. In 2018, Patrick Mahomes set the single season passing touchdown record, making him the clear MVP. Jackson setting the single season quarterback rushing record would be enough to put him over Wilson, as passing for over a projected 3,000 yards and well over 1,000 rushing yards is jaw dropping enough without even considering his explosiveness or touchdown/turnover ratio. Given that Jackson needs just 164 rushing yards over five more games, he should smash Vick’s record.

The nail in the coffin is to no fault of Wilson, but the Seahawks have been a good team without him. Last year the Seahawks were a solid 10-6 team while vastly leading the NFL in rushing attempts. Wilson was relegated to a game manager role while running back Chris Carson carried the team to the playoffs. When the Seahawks were perennial Super Bowl contenders, kings of the NFC West, they were led by a strong running game headed by Marshawn “Beast Mode” Lynch and the Legion of Boom defense led by stars like Richard Sherman, Kam Chancellor and Bobby Wagner.

Meanwhile the Ravens were stuck with mediocrity for years at the quarterback position with Flacco until Jackson took over. Unless you think running back Mark Ingram II, while capable, can carry an offense, Jackson determines how far the offense moves. That offense, despite being one game behind those who played on Thanksgiving, is now second in terms of total yards, and is first in rushing yards, yards per game, total points and points per game.

Jackson means more to the Ravens than Wilson does for the Seahawks. That makes him the more valuable player.

Jackson just eviscerated the Los Angeles Rams in Week 12, throwing for three of his five passing touchdowns in the first half alone while completing nine straight passes and rushing for 80 yards. They won 46-6.

As Jackson put it after his perfect passer rating performance in Week 1, “Not bad for a running back.”

While demolishing the former NFC West champs, Jackson also set another NFL record, becoming the first quarterback to throw for at least 3,000 passing yards and rush for 1,500 yards in his first two NFL seasons, according to ESPN’s Jamison Hensley.

Reminder— he only played 7 games his rookie year. He has been that good.

You can say that again. Hell, you can scream it from the mountaintops.

By redefining the quarterback position and performing at such a high level in 2019, Jackson deserves to be the NFL MVP of the 2019/20 season.