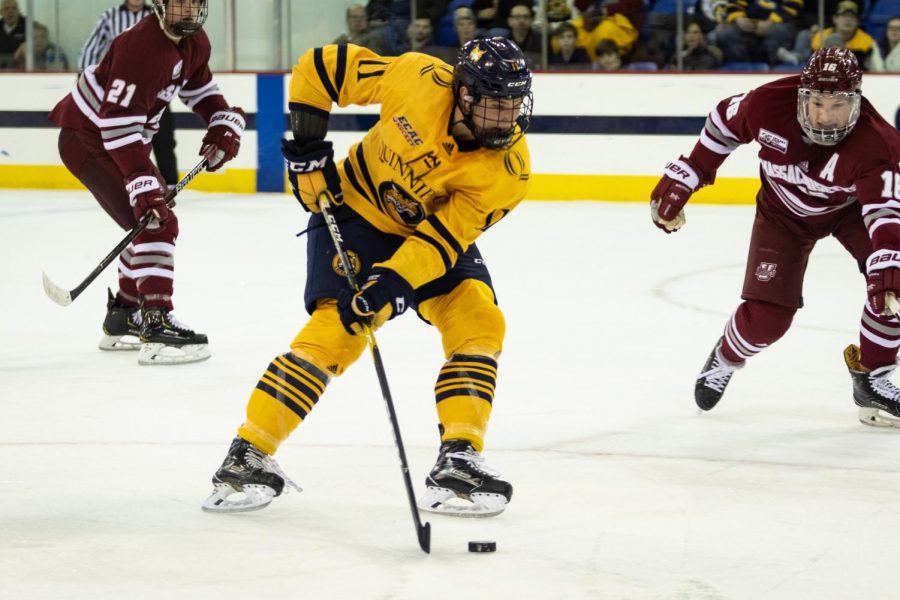 There’s a lot of frustration surrounding the Quinnipiac men’s ice hockey team, and the result of Friday night’s matchup certainly did not provide any assistance.

“Everybody is frustrated and things aren’t going our way right now,” Quinnipiac head coach Rand Pecknold said. “We’ve got to fight our way out of it. I’d say we did for 52 minutes tonight, we were pretty good, we were still in it. And, unfortunately, we’ve got to play 60 minutes.”

After a scoreless and actionless first frame, the fun began in the second period. UMass freshman forward Cal Kiefiuk redirected a shot from the point past the glove side of junior goaltender Keith Petruzzelli to open the scoring 12:49 into the second. Initially, it looked like freshman defenseman Gianfranco Cassaro’s shot would miss the net, but Kiefiuk got enough to pot home his sixth goal on the season.

For the rest of the second and most of the third, it remained even keeled. Then, as Pecknold put it, the wheels came off.

It started with a big hit from UMass sophomore forward Bobby Trivigno on Quinnipiac sophomore forward William Fällström about halfway through the third period. Fällström immediately fell to the ice and remained face down. While Fällström exited the game with the help of his teammates, no penalty was assessed to Trivigno for the high hit.

“It’s frustrating because we’re getting five-minute majors (in other games),” Pecknold said indirectly about the hit on Fällström. “It is what it is, we’ll let the league deal with it.”

Minutes later, junior forward Joe O’Connor began stirring the pot with some jawing after he got tangled up with a Minuteman. Seconds later, he came in late after play was blown dead and jabbed at UMass senior goaltender Matt Murray’s glove covering the puck which again caused melee to follow. O’Connor was given a two-minute penalty for slashing, and UMass had the man advantage.

On the power play, a wild scrum in the crease ensued after the puck was thrown in front by UMass junior forward Mitchell Chaffee, and eventually, Trivigno was the one that knocked the loose puck in, giving UMass a 2-0 lead with just over six minutes left in the game

“Up until the 1-0 point, we were mature,” Pecknold said. “Then we kind of came off the rails there. We took a bad penalty we didn’t need to do.”

With just over three and a half minutes to go, UMass was whistled for interference, and Pecknold elected to pull his goaltender and skate with six attackers against the four Minutemen. The move backfired as Chaffee slid home an empty netter and sealed the 3-0 win for the Minutemen.

“A big problem we had tonight, we took too long to shoot,” Pecknold said. “And we missed the net a ton. A lot. We’ve got to get pucks off quicker, get them on net and we’ve got to hit the net more … That’s been an issue all year long.”

For the Bobcats, the offense has been their handicap as of late. After starting the season 4-1-0, the team is 2-7-1 in its last nine games and are averaging just 1.67 goals per game during that span.

“A lot of guys are gripping the stick right now,” Pecknold said. “We’re frustrated and we’re not scoring. But it’ll come. We’re getting our chances and just eventually they’ll go in.”

The same two squads will face off again tomorrow, this time at the Mullins Center at UMass. The puck drop is set for 7 p.m.