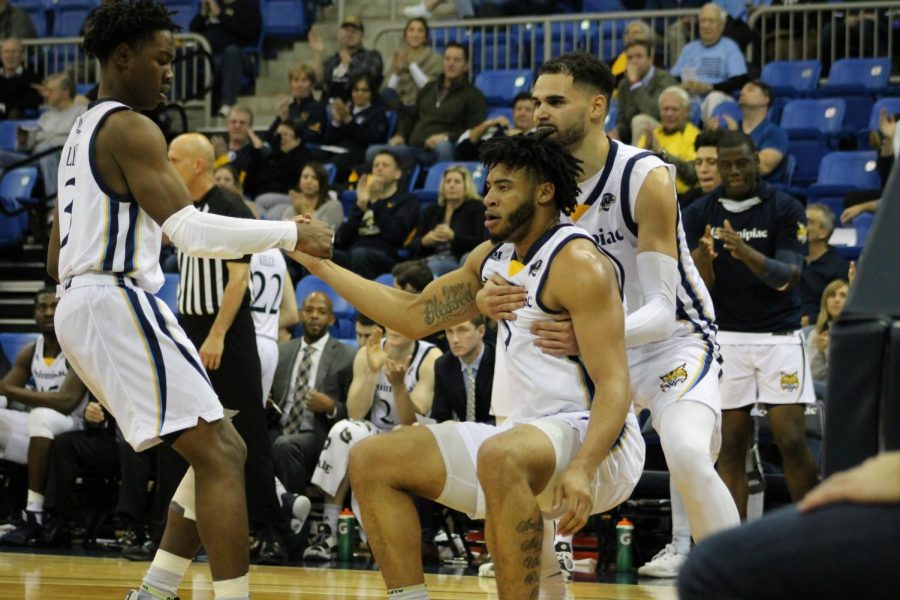 This win marks the Bobcats’ second straight at home. They improve to 2-2 on the season, while the Blue Hose fall to 1-5.

“I wouldn’t say (the short rest) affected us,” sophomore guard Tyrese Williams said. “We just got to find a way to create enough energy throughout the day, period.”

Following a game in which Quinnipiac shot 51.5% from 3, the team began 0-5 from distance.

That changed midway through the first half as graduate student forward Aaron Falzon hit three 3-pointers before entering the break.

“We have really good guards … They hit me in the right spots, and I had the chance to shoot open shots,” Falzon said. “I stepped up and shot them and made them, so that’s just the product of our offense and our team.”

The Bobcats were up 29-22 at halftime, but before the teams went to the locker rooms, Falzon and sophomore guard Chris Martin got into a dispute.

“(It was) nothing really,” Falzon said. “They tripped me a little bit, and I said, ‘Don’t do that.’ It was bigger than it was. It wasn’t really a big deal.”

Shortly into the second half, the Bobcats revived their 3-point shooting from yesterday’s game against Albany.

Between Falzon, junior guard Rich Kelly, junior forward Jacob Rigoni and Williams, Quinnipiac shot 5-9 from 3 in the opening eight minutes of the second half.

With the help of this offensive explosion, the Bobcats were up 48-38, tying their largest lead of the game.

Though his scoring wasn’t on display, redshirt junior forward Kevin Marfo’s defense and rebounding stood out, once again.

Quinnipiac outrebounded Presbyterian 39-32. Marfo matched his season average by grabbing 13 boards, six of them on the offensive end.

Even with Marfo’s efforts, Presbyterian sophomore forward Cory Hightower recorded a triple-double. He finished with 16 points, 10 assists and 10 rebounds.

Along with Hightower, freshman guard Michael Isler chipped in 14 points, five assists and five rebounds on 6-of-7 shooting from the field.

Quinnipiac plays its third and final game of the Bobcats Invitational against the Sacred Heart Pioneers tomorrow, Nov. 24, at 3:30 p.m. at the People’s United Center.

“I think the biggest thing to me as a coach on short rest … and just in general, you got to be yourself,” Quinnipiac head coach Baker Dunleavy said. “You got to play to your strengths and then do your best to take away what the other team has.”