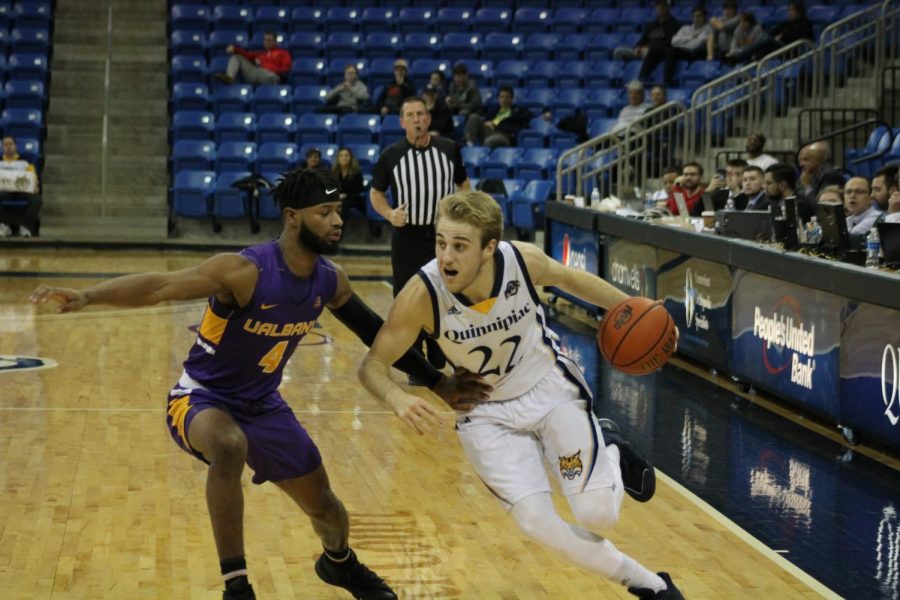 The Quinnipiac men’s basketball team returned to Hamden for its first game at the People’s United Center and defeated the Albany Great Danes 86-69.

This was Quinnipiac’s first game in the Bobcats Invitational, and with the win, junior guard Rich Kelly believes the team has set the tone for the next two games.

“It puts us in a — hopefully — good place, if we’re not complacent,” Kelly said. “We just have to take care of everything that we can control … Got to get a good night sleep, hydrate. If we can do all that, this will be a great springboard for us.”

Kelly led all scorers with 22 points while shooting 8-of-13 from the field and an almost perfect 6-of-7 from behind the 3-point line.

Though Kelly was the leading scorer, it was a team-wide effort on offense. Three other Bobcats scored in double figures, and the team hit 51.5% of its 3-pointers.

The uber-efficiency from beyond the arc is uncommon for Albany’s opponents this year. Entering tonight’s contest, the Great Danes held opponents to 23.2% from the 3-point line.

The Bobcats’ scoring came early as they opened the game on an 11-4 run, led by junior forward Jacob Rigoni. He had seven of the first 11 Bobcat points.

“Part of the reason we made shots was we got good ones because we executed,” Quinnipiac head coach Baker Dunleavy said.

With 7:38 left in the first half, the Bobcats began another scoring spree. The team went on a 14-6 run with four made 3-pointers from three Quinnipiac players.

The score was 45-33 at half as Quinnipiac closed out on 23-15 run. Despite the high-scoring offense, it was Quinnipiac’s defense that led the charge.

The Bobcats played a 2-3 zone in the first half but switched to man-to-man defense briefly in the second half. Dunleavy wanted to keep the Great Danes on their toes by throwing them different defenses.

“They just had an incredible ability to make tough shots,” Dunleavy said. “We were really trying to take away threes from certain players, so they kind of stretched us out of our zone and left the middle open.

The Bobcats held the Great Danes and sophomore guard Cameron Healy to 42.6% and 31.3% from the field, respectively. Healy came into the game averaging 16.3 points per game on 47.6% shooting.

“(Redshirt junior forward Kevin Marfo) is our leader on defense. He’s our anchor, he holds it down in there,” Kelly said. “But I try to do my part up top. It helps when I hear him yelling, and I hear (graduate student forward Aaron Falzon) and Jake on the back line. I’m like, ‘I gotta match them.’”

Quinnipiac has a quick turnaround as the team plays the Presbyterian Blue Hose tomorrow, Saturday, Nov. 23, at 6:30 p.m. at the People’s United Center.