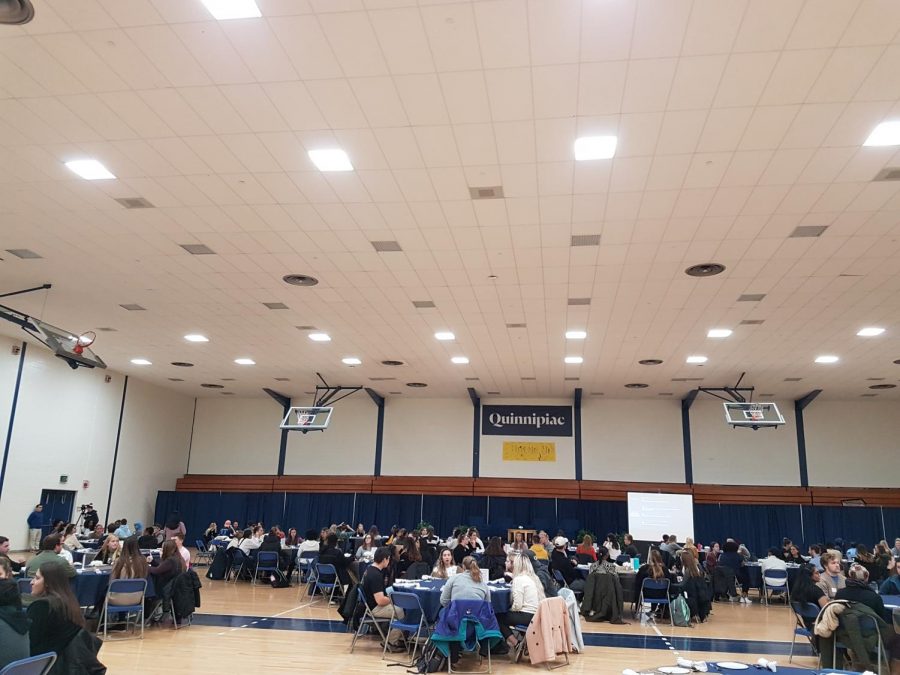 The Student Government Association (SGA) hosted Ask Away, at Burt Khan Court on Nov. 19, as a platform for students to have conversations about topics that some people find difficult to talk about in public.

Over 200 students came together on a Tuesday night to discuss controversial subjects. 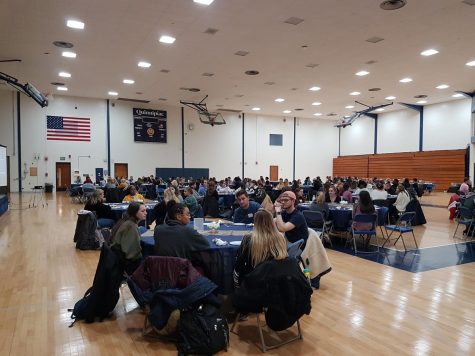 “The purpose is to create an atmosphere that sometimes often uncomfortable but leads to bridging of different perspectives and opinions that allows people to agree or disagree,” Esau Green, SGA vice president of student experience, said.

Some students came to the event with expectations. Kellyann McClenahan, a senior in the entry-level master’s physician assistant program, said that she wanted to know what other students think of Quinnipiac.

“I want to talk to people about the university and see how others’ opinions are,” McClenahan said.

The event was set as a dinner-table setting with nine chairs at each table. Each student got a seat assignment with at least one SGA member as a facilitator. Students sent in questions online through the website Slido with an option of being anonymous. Green read some of those questions out loud throughout the event.

After everyone was settled, Green got the discussion started with the topic Chick-Fil-A’s presence on campus since most people knew about it.

“It was an ice-breaker kind of thing,” Finton Sweeney, an undeclared freshman, said. “(The discussion) was pretty smooth even though I don’t know any people because they are upperclassmen, but I am a freshman, but I still feel comfortable with it.”

The conversation at each table continued onto their own topics. 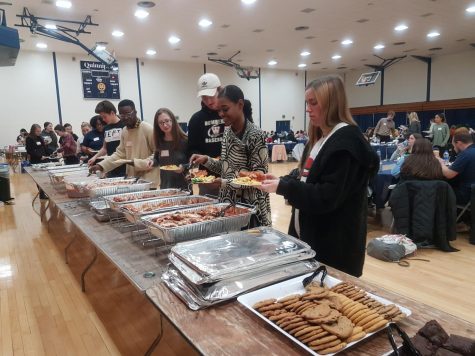 Some questions that were asked around the room were on privilege, the role of SGA, the role of students, the apathy of the Quinnipiac community, dialogues that should be had on campus and more.

Green said that the turnout of this event was better than what SGA expected considering it was a Tuesday night and most of the students were preparing for upcoming finals.

“At first, I was nervous but I see how people kind of be so entertained and talkative,” Green said. “It definitely met and went beyond my expectations.”

Not only SGA was satisfied with the event, but students also thought that this event has met their expectations.

A sophomore political science major and SGA class senator Ja’Vielle Foy expected a lot of intellectual conversations before coming to the event and her expectations were met.

“We had a lot of diverse opinions,” Foy said. “We agreed to disagree.”

Foy said that this event’s setting was a good way to start an uncomfortable conversation as they got to speak to people that they never thought they would speak to. This dinner-setting format made them understand each other more through eye-contact when they were speaking.

SGA encouraged anyone who still wants to have this kind of conversation to come and talk to SGA members in the SGA suite located on the second floor of the student center.

The event lasted about an hour and a half before Green and Austin Calvo, president of SGA, took the stage and wrapped things up. Green threw the last big question for everyone to talk about.

“From everything we have seen and discussed, where do we go from here?” Green asked everyone in the room.

Everyone continued to discuss the possibilities with their tables before leaving.