Chartwells cooks up plans to improve 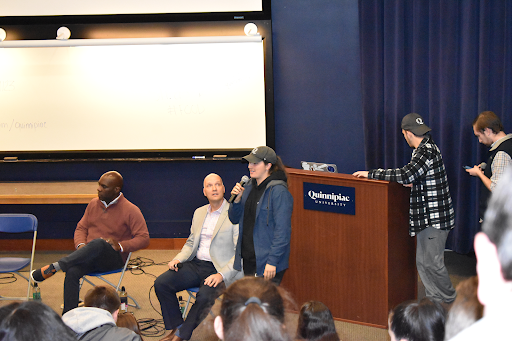 A confirmed instance of Quinnipiac Dining serving raw chicken on a sandwich  made waves across campus and social media accounts like QU Barstool. A town hall meeting sponsored both by Quinnipiac Dining and the Student Government Association (SGA) on Wednesday Nov. 13, gave Quinnipiac students the opportunity to voice their questions, concerns and suggestions about the quality of food on campus.

“It has been pretty apparent, we had a horrible issue with a chicken sandwich on campus amongst a few other issues,” said Corporate Chef and Head of Culinary Joe LaBombarda. “First and foremost, we wanted to address this and not to make any excuses. It’s something we’re embarrassed by and truly sorry that happened. It was a new product on campus that we had never worked with in the past. The cooking time was a little bit longer.”

Some students who attended the meeting thought it was an effective way to voice concerns about the food with the Chartwells leadership.

“I thought the town hall should’ve happened much sooner, but I’m happy it happened and allowed for direct discussion between the student body and Chartwells,” said Stephanie Felix, junior advertising major.

Resident District Manager of Quinnipiac Dining Chuck Couture said the meeting provided an opportunity to discuss the chicken sandwich incident as well as many other topics of concern for the Quinnipiac community.

“We want to understand, we want to do a good job, so that’s why we’re here.” Couture said.

Nappi referred to a recent survey sent to Quinnipiac students as a platform to provide feedback about dining. The top priority reflected in the survey of 150 respondents was to innovate the menu more.

Some of the new foods and projects within campus were inspired and taken directly from the survey, Nappi said, assuring the audience that a popularly desired item from the survey, pot stickers, are currently “in the works” with Labombarda.

Another popular response from the survey included extended weekend hours for Sambazon Açai bowls, which were instituted the weekend prior to the town hall meeting, Nappi said.

Nappi also said that chicken noodle soup will be available every day to address the demands of the survey. When supply is exhausted, a substitute will be provided and a notification will be posted stating that there is no longer any chicken noodle soup.

The survey’s most common complaints involved lack of variety and innovation in cuisine and Nappi said Chartwells and Quinnipiac Dining are working on several improvements.

To increase culinary diversity across Quinnipiac campuses, a Tex-Mex installment, Sono, will be new to the York Hill campus in the coming future, in addition to the one located in Mount Carmel’s Bobcat Den. Nappi also discussed a “barbecue concept,” called Smoked, which is intended to increase the variety of available foods.

Leanne Evangelis, director of operations, said that more of Quinnipiac Dining’s pop-up installment budget will be used on campus to offer more options to students. Nappi said the pop-ups could be used to gauge students’ interest in new culinary options.

There are also plans to modify the experiences students have with options currently on campus Couture said. Students will be able to use the “Boost” app to expedite the ordering process.

“Next semester, at Starbucks and Au Bon Pain, you’ll have the ability to order ahead, and you’ll use your meal points on that,” Couture said.

Parts of the dining experience that are not food-related were discussed too, such as staff, price and sustainability.

One student shared an experience where something was labeled as vegan, but upon asking a member of the dining staff, it had an egg in it.

“I’ll address labeling,” Couture said. “We know this is an area of opportunity for us, so we have to do a better job labeling everything, including price. I’m working with Carly and her team to do a better job of that.  We’ll work on that.”

A few students mentioned how they felt that staff had a poor attitude.

“I’ve had a worker not address my order and just keep moving,” said Traci Duff, junior history and education major.

Beginning next week, the staff is going to be retrained on how to improve their customer service, Couture said.

“We’re a busy place, and I know you’ve all been to the cafe,” Couture said. “It’s a lot to deal with for the staff.  We’re always trying to improve customer service.”

Another topic of concern was the price of the food being served. One student mentioned how they always ran out of money before the end of the semester, and asked if Quinnipiac had considered other methods for meal plans, such as a ‘tap system.’

“We’re constantly trying to evaluate what you guys want,” Couture said. “We are talking about possibly bringing in an all-you-can-eat element to the program.  It’s not super simple, there would be a lot of elements to figure out. We hear you on that, and we’re trying to figure it out.”

Throughout the town hall meeting, the Chartwells representatives emphasized communicating with them when concerns come up.

“I’ve been listening, and I think the key takeaway is to take care of the issue when you’re in the facilities,” Nelson Defigueiredo, division president, said. “We don’t want you to walk away dissatisfied. We have 19 managers on this campus for that purpose — to walk away satisfied.”

Representatives pointed out that if a student has a question, suggestion, or an incident report, the dining staff has an easy method of access that students can utilize: a text line. The number is (203) 889-9123.  They said it is a quick, easy way to get in contact with people involved with the dining experience, other than discussing it with one of them in-person.