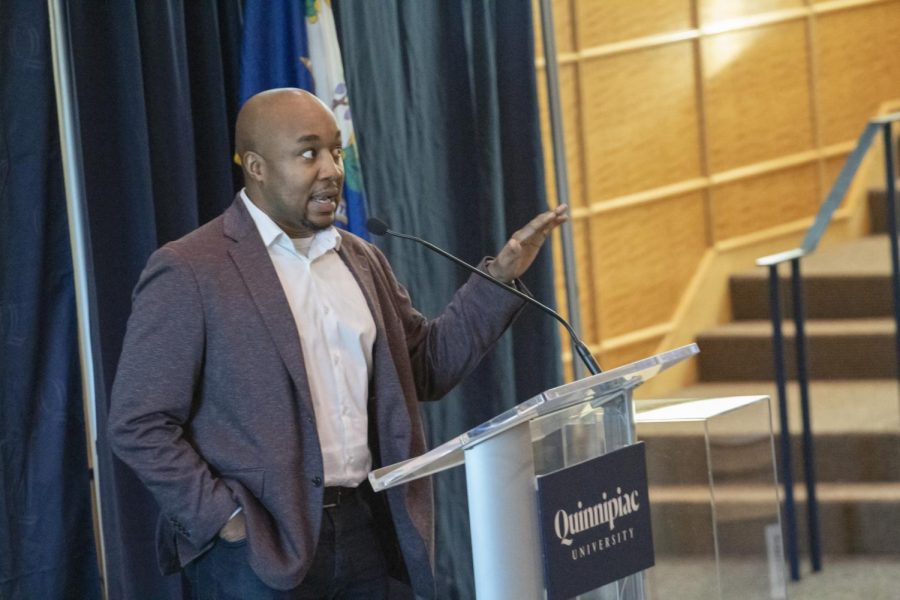 Sawyer addressed the concerns of students, faculty and staff at the open discussion.

Faculty, staff and students told administrators at Quinnipiac on Nov. 14, that the university’s diversity problems run much deeper than the chicken sandwiches that started the discussion.

The conversation about inclusivity began at a town hall hosted by President Judy Olian for faculty and staff Nov. 4. Associate Professor of Journalism Margarita Diaz asked Olian and the other administrators why the university continues to host Chick-fil-A on-campus despite a history of the owners donating to anti-LGBTQ organizations. Her question was a follow-up to a tweet she sent out on Oct. 28 asking the same question.

For Diaz, her question was never about chicken. It was about the larger culture at Quinnipiac that is unwelcoming and unfriendly for minority students. She said that there are other companies that can provide the same product, but have politics that are more inclusionary.

“If that’s what Quinnipiac stands for then why don’t we support those companies instead of bringing to campus a company whose ownership is actively working to exclude others and deny their humanity?” Diaz said.

Diaz said after the town hall last week that resolving Quinnipiac’s problems with inclusion will require a culture shift that won’t happen overnight, and won’t be built by one person alone.

Chick-fil-A’s presence on campus was a motif for the overall discussion at the event focused on bringing to light Quinnipiac’s shortcomings when it comes to inclusivity.

Several of the over 120 attendees packed into the Mt. Carmel Auditorium spoke at the microphones positioned in the aisles and brought their Chick-fil-A-like experience to the attention of Don Sawyer, vice president for equity and inclusion, Jennifer Brown, executive vice president and provost and several other leaders. Olian was unable to attend the discussion because of another commitment.

Madeline Pagano, a senior health science major, said Quinnipiac has discriminated against her as a disabled student in each of her four years here. She said she has been placed in residence halls without elevators and been denied handicapped parking because a Public Safety officer was parked in the designated spot.

“People shouldn’t have to go in my wheelchair, wheel around in front of everyone in this entire room and feel excluded while everyone gets to walk down the stairs,” Pagano said, gesturing to the ramp in front of the room, which was blocked by the frame of the Quinnipiac backdrop behind the podium.

Several administrators, including Sawyer, responded to Pagano’s concerns about how disabled students don’t feel welcome at Quinnipiac. Kate Palumbo, associate director of the Office of Accessibility, told Pagano that she is working with another group of students on a similar concern and invited her to join.

“We have a bunch of students who are coming to the table as a new, student-led organization and I think it would be incredible for you to join forces with them to continue to make your voices heard,” Palumbo said.

Elyssa Wrubel, the College of Arts and Sciences Student Council president, raised concerns about the accessibility of the Albert Schweitzer Institute (ASI), which is not connected to campus via a sidewalk. Students must walk through the grass and cross New Road without a crosswalk. While there is a cross-walk to the Herald Jewish House, students must go down a flight of stairs to access it.

“(The lack of sidewalks) is not only unsafe for able-bodied students, but it is also physically inaccessible for any students with mobility issues,” Wrubel said. “Students who are wheelchair-bound have to get a ride across.”

Student Government Association (SGA) President Austin Calvo said SGA has tried to address the accessibility issues in the past. University administrators stopped SGA’s efforts stating that ASI is accessible because a student can call Public Safety for a ride. Calvo said SGA has recently made the Board of Trustees aware of the issue.

Wrubel also spoke about the Center for Religion that displays a cross on the outside. She proposed that the building display a religious symbol for all religions represented on campus.

“We feel that the presence of one single religious symbol on the building would be a deterrent for students of any faith who want to use that space as a non-denominational space,” Wrubel said. “Because it is the only one we have on campus we feel it is crucial to make that space welcoming for students on campus.”

Father Jordan Lenaghan, executive director of university religious life, said the space is supposed to be inclusive for all students, but in putting a symbol for every single religious group would risk leaving out some smaller religious groups.

“There are over 33 different religious groups on this campus that we know about,” Lenaghan said. “If we create symbols for some communities but we miss other ones, then for me that becomes unacceptable because these people become silent.”

Sawyer said he would be interested in reviewing Wrubel’s proposal.

Julia Fullick-Jagiela, chair of the department of management and co-director for the center of women in business, criticized Quinnipiac administration for its unwillingness to make exceptions that would ultimately promote a more inclusive environment. She mentioned the stop-the-clock policy passed by the faculty senate that will go into effect next year.

Stop-the-clock policies allow faculty at universities to delay their eligibility for tenure because of a major life event such as an illness or the birth of a child.

At Quinnipiac, faculty apply for tenure after six years, which would protect them from losing their jobs. However, if a major life event occurs when it is time to apply for tenure, it can be difficult to complete the paperwork and requirements by the deadline.

Fullick-Jagiela said administration should be able to make an exception for one faculty member who currently will not be able to reap the benefits of the stop-the-clock policy since it does not go into effect until next year.

“To see an amazing faculty member who’s most likely not going to be able to get tenured because she can’t get clock-stop support from the administration, is extremely frustrating,” Fullick-Jagiela said.

No administrators responded to Fullick-Jagiela’s concerns, but Sawyer did define ‘clock-stop’ for the audience.

“I would like us to think a little more about what we can do to support international students, faculty and staff both before they come to campus and when they are on campus and to include them in our discussions about inclusivity,” Bamford said.

Sawyer wasn’t sure where Quinnipiac stood on the policies regarding international faculty, so he passed the mic to Annalisa Zinn, vice president for academic innovation and effectiveness.

Zinn explained that it is very difficult to do immigration sponsorship for non-tenured positions.

“The university must demonstrate that there was no U.S. workers that could have been qualified for the position,” Zinn said. There is more flexibility with tenured faculty because of things like research and we are looking at the most qualified.”

She said the difficulties regarding immigration sponsorship will not deter the university in hiring international faculty in areas which they are eligible.

Jim Buccini, associate teaching professor of sociology, said he has heard of prospective employees from minority groups searching Quinnipiac’s website for information on diversity and feeling defeated by the lack of results.

“(Prospective hires) were really questioning if Quinnipiac had a clue and whether they then belonged here as faculty,” Buccini said.

Sawyer said he and other administrators are working to fill the director of global education position responsible for recruiting international students after the death of the previous director, Andrea Hogan, last year.

Buccini said Quinnipiac’s failure to promote inclusivity in faculty, staff, students and policy is detrimenting its ability to recruit diverse students, who do not feel welcome when they come to visit campus.

Buccini said his son, who is Latino, came to tour Quinnipiac and left feeling excluded and ashamed that his father worked there. The crowd grimaced as he told the story of their campus visit.

“The multicultural suite was pointed out as the space where black and Muslim students hang out,” Buccini said. “The only student organizations that were talked about was Greek life. Consequently, he will not be taking advantage of my free tuition.”

After Buccini’s remarks spanning safe space training, gender neutral bathrooms, hiring processes and anti-bias training, Sawyer asked him to identify one issue he wanted him to respond to.

Sawyer ended the meeting by acknowledging that an hour is not enough time to address diversity problems at a university, but he said it is important to take what was said into consideration when drafting a plan for inclusive excellence.

“I don’t know what ‘inclusive excellence’ means,” Buccini said. “It sounds elitist and inappropriate but we need a campus that not only embraces, but embodies diversity and inclusion. We’re not there yet. I am confident if this is representative of the people who are interested, we will be there.”