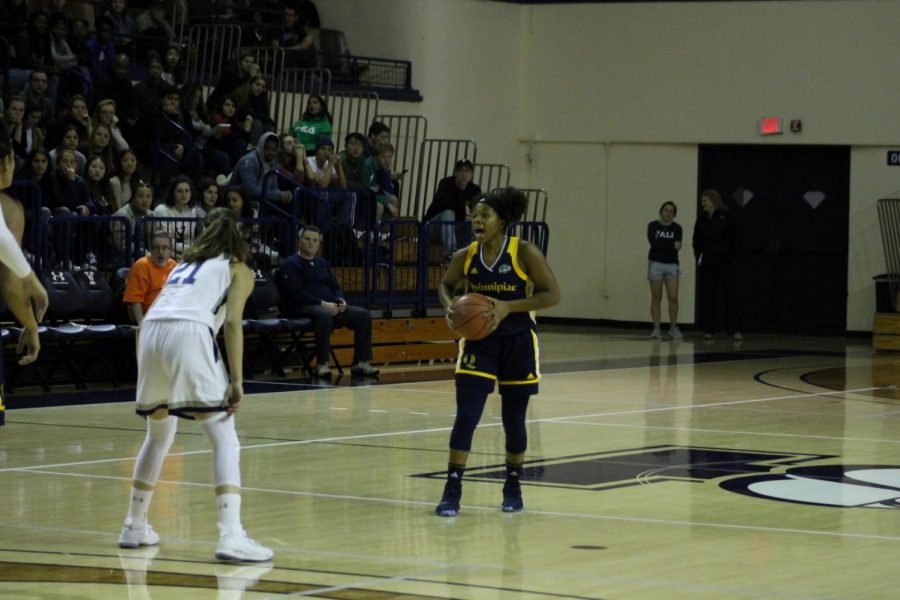 This marks the first time that the teams played each other since Nov. 28, 2012, with the Bobcats winning the previous two meetings.

“I feel a lot better with this game,” Morris said. “My nerves were lowered this time and focused on the next play. My first game I lacked my confidence, but when I got my first shot up in this game, it started to flow for me.”

The first quarter was a back-and-forth affair. The Bulldogs were then able to jump out to an early 11-5 lead, going on an early 6-0 run due to their swarming defense which caused many Bobcat turnovers.

Though the Bobcats struggled early in the first period, they were able to climb their way back into the game. It started with senior guard Taylor Herd, who began the game hot with six early points, shooting 2-for-2 beyond the 3-point line, bringing the Bobcats within five points at the end of the first quarter.

Going into the second quarter, the Bobcats came out aggressive, as they forced turnovers, grabbed offensive rebounds and started drawing more fouls. They ended the second quarter on a 7-0 run down and went into halftime down 33-29.

Coming out of halftime, the Bobcats were able to regain the lead early in the third quarter.

However, the Bulldogs controlled the end of the third quarter, starting with a steal by sophomore guard Mackenzie Hewitt and ending with junior guard Ellen Margaret Andrews nailing a three with 13 seconds left.

Even though it seemed like Yale was dominating, Quinnipiac was only down six going into the fourth quarter.

The beginning of the fourth quarter started in favor of the Bobcats, as junior guard Shaq Edwards scored the first five points on a 3-pointer and two free throws, which cut the lead to two.

Yale has been getting the right play at the right time all night. At a certain point clutch plays are no longer a coincidence.

57-54 Bulldogs, 4:31 to go. Yale has done just slightly more all game to maintain the lead for the majority of the game. #MAACHoops pic.twitter.com/Chw5IJg3p7

Following a timeout, Yale came scored on its next two possessions by way of an alley-oop from senior guard Roxy Barahman to sophomore forward Camilla Emsbo and a key jumper from Barahman. These two possessions pushed the lead to 57-52 for the Bulldogs in the middle of the fourth quarter.

Down two, the Bobcats had an opportunity to tie the game at 57, but Morris failed to convert her fadeaway shot, allowing Barahman to seal the game with an open layup.

Though the Bobcats are winless through two games, head coach Tricia Fabbri knows that her team will find its footing.

“When you look back to where it began, we started out 0-3 with a really young team that was talented,” Fabbri said. “This is the short-term pain for long-term gain, and that is where we are. You never want to get used to this feeling, but you gotta take a broad picture and step back and see the progress being made. This is toughing us up, really making us better where we want to be.”

Look for the Bobcats to come with a chip on their shoulder as they play the Bucknell Bison on Saturday, Nov. 16, at 2 p.m. at the People’s United Center.