Nothin’ but Nylon: Patience is a virtue 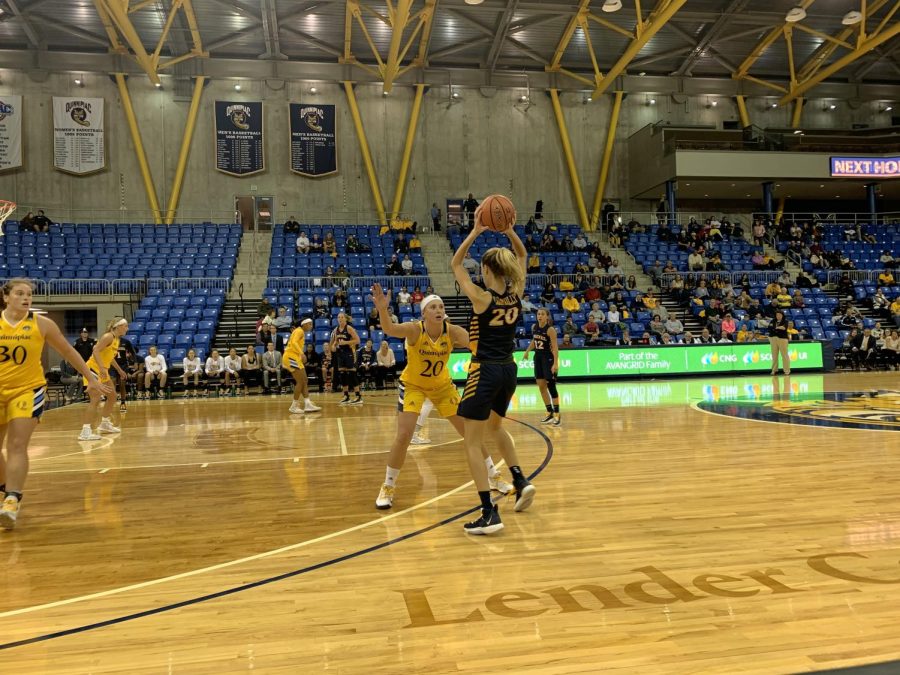 Quinnipiac women’s basketball head coach Tricia Fabbri wasn’t thrilled after losing the season opener at home. No coach would be, and neither would any player. But it isn’t the first time the Bobcats have started the season on the wrong foot.

Just two years ago, Quinnipiac lost its first three games of the season by a combined 63 points. Yikes.

The Bobcats turned it around, however, after playing some tough, out-of-conference opponents and only lost three more games the entire season, going undefeated in the MAAC.

That might not be the case every time they drop a season opener, but Tuesday’s game against the Drexel Dragons on Nov. 5, may not foreshadow what’s to come this season.

“They all — freshmen, sophomores and upperclassmen — have tremendous talent,” senior forward Paige Warfel said. “That’s definitely not a reason why we lost (on Tuesday), but we do have a lot of growth. I think moving in the future, just playing together more and more, it’ll definitely help us in the long run.”

The Bobcats didn’t look perfect by any means in game one, but they didn’t look all that bad either. As with any team after its first game, there are things to work on. Nobody comes out and plays perfect basketball from the jump, three time defending MAAC champions included.

So, what are some wrinkles in Quinnipiac’s game that need to be ironed out? For one —chemistry on the court.

The Bobcats were responsible for 16 turnovers against Drexel. This likely won’t be the norm moving forward, but still, it was well north of last year’s average 12.3 turnovers per game.

In the season opener against Drexel last season, the Bobcats coughed up 14 turnovers — not much better. The biggest difference was the assists. They still managed 10 assists in the 2018-19 opener, compared to just eight Tuesday night. That was partially due to the youth of the team.

“I thought Drexel did a great job in terms of what we were doing with a little ball screen action that they really went after and chopped … It was problematic and disruptive in what we were trying to do with an offensive flow,” Fabbri said. “We’ve got to be a bit more calm instead of trying to force the action. To be a little more patient with what they were doing and be able to face that double and then back it out and find the open person for the second pass, and the open person for an easier shot.”

Just like getting over a heartbreak, the only thing that can help build on-court chemistry is time. The team simply needs to keep geling. The more that players share the court, the more comfortable they’ll become with one another. You learn a teammate’s tendencies best through experience, by making the wrong pass so you learn how to make the right one.

Of the 10 players that got playing time, five were suiting up for Quinnipiac for the first time. Months of practice build chemistry, but it’s impossible to replicate game speed and intensity.

“I think we are really new out on the floor, so we weren’t really sure what we were gonna do,” Fabbri said. “I mean, we’re a real work in progress … We’ve been really working hard and getting better every week. In a big picture, look behind the curtain where we’ve been growing week to week, it’s pretty nasty.”

The Bobcats have established a solid foundation to build upon. One area to grow?

Quinnipiac was outrebounded 43 to 35, costing the team numerous possessions. Quinnipiac matched Drexel in defensive rebounds with 24, but the facet of the game where Quinnipiac lost was the offensive glass.

“We gotta get on the boards,” Warfel said. “They had way too many offensive rebounds for putbacks, and that killed us.”

Fabbri expanded on the importance of rebounding and shed light on the steps that will be taken to improve.

“We just couldn’t corral it, we couldn’t bring it in, and usually that’s really been a strength of ours,” Fabbri said. “So, obviously we will learn from that and really point to that moving forward and continue to emphasize that in addition to keeping Paige and (freshman forward Mikala Morris) off the boards in practice as we go forward.”

One big reason the Bobcats struggled to grab rebounds was because of foul trouble. Three of their best rebounders finished the game with four fouls, one shy of an automatic disqualification.

Warfel, Morris and freshman center Cat Almeida all finished the game with four fouls. Morris and Almeida took just 13 and 10 minutes to reach those marks, respectively. If the Bobcats want to improve upon their rebounding performance against Drexel, they’ll have to stay on the floor to do so.

The fouls didn’t just prevent rebounds and allow second-chance points, but they also led to easy offense for the Dragons. They took 29 free-throw attempts during the game, one shy of doubling Quinnipiac’s 15. Down the stretch, those opportunities proved vital.

In the fourth quarter, the Dragons went 14-for-18 from the charity stripe. They only scored 19 points total in the last 10 minutes of play, meaning just five points were scored on field goals. If the Bobcats want to close out tight games in the future, they’ll have to find ways to avoid gifting their opponents easy offense in crunch time.

\Sophomore guard Mackenzie DeWees picks up her matchup at half court.Aside from free throws, the Dragons scored only five points on 20% shooting from the field in the final frame. The Bobcats were doing the right things on defense, it was just a matter of doing so consistently, and ultimately they weren’t able to.

At the end of the day, there are 28 games remaining on the schedule. Conference play doesn’t start for another eight games, giving the Bobcats plenty of time to refine their game before the intensity picks up a notch.

“I think it stung a little bit more for us seniors because we’re so used to winning,” senior guard Taylor Herd said. “We just gotta teach the freshmen that sting almost, you know? They’re not used to that, so just get grittier and really emphasize that four points. We could have had that game.”

Once the fight is there, the talent will start to shine even brighter. The roster is packed with gifted individuals right now, which is enough to earn some victories in the regular season. It was almost enough to start 1-0. But once the playoffs begin, individual talent won’t be enough. The chemistry needs to start clicking if Quinnipiac wants a chance at a fourth straight MAAC championship.

“Tough one. Tough one right now to start the season,” Fabbri said. “But a lot of new faces out there and you know, it was a good game against a really good team.”

Moving forward, it’s important to realize that the entire season is a process. The goal is to come out as champions on March 14, 2020, and each game is just one step toward that accomplishment. The wins will come, but it’s important to learn from the losses as well.

“We’re not hanging our head,” Warfel said. “I thought that we had great energy and just now we know what we can work on.”

With one game under their belts, the Bobcats know what changes need to be made going forward. Practices and games will lead to improved play and future wins, but it’s not a one-day operation. With a head coach like Fabbri, the Bobcats will work out the kinks in their game, and find their way in to the win column some time soon.

“Everything could get a lot cleaner, a lot smoother, and I think you’re gonna see that unfold as we continue to go deeper into the process,” Fabbri said.