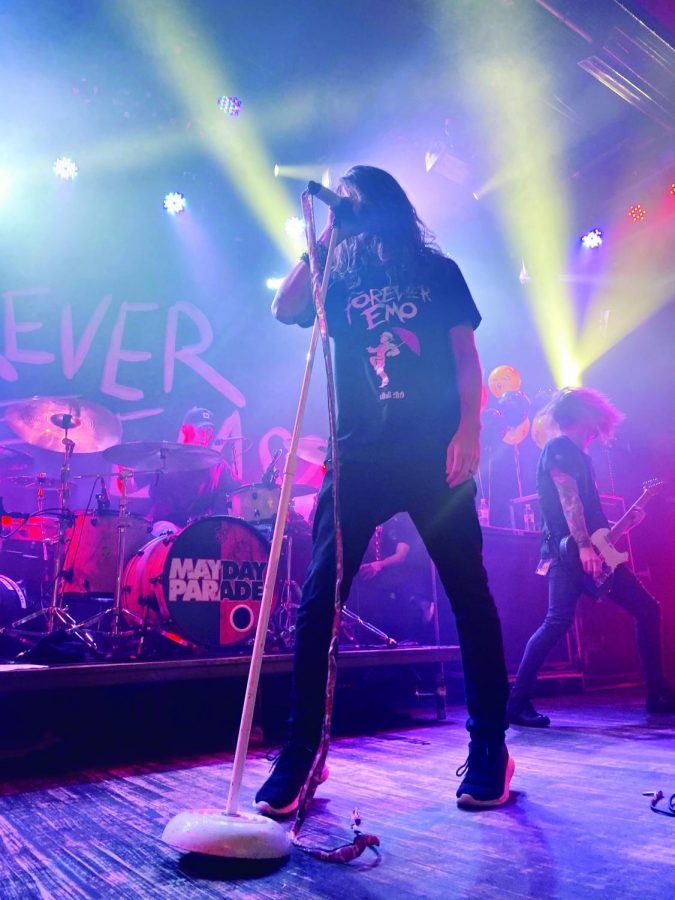 While Toad’s Place is known for its Saturday night college dance parties, Mayday Parade had the venue bursting with energy on Monday, Nov. 11.

The pop-punk band hit New Haven on its “Forever Emo” tour as it make its way across the U.S. Wanting to revisit the peak of their career and to celebrate the anniversary of its 2009 album “Anywhere But Here,” Mayday Parade’s setlist consisted of covers from groups of the same genre and hits from its own albums.

Although the show wasn’t set to start until 8 p.m., the dance floor was filled with showgoers dancing along to opener DJ Emo Night Brooklyn’s setlist. The DJ was determined, and later succeeded, in getting the crowd pumped for what was to come.

Among the many songs he played in his hour-long set, fans sang along to cult-favorites such as “Shake It” by Metro Station and “Move Along” by All American Rejects. Knowing his audience, who were mainly adorned in Mayday Parade or Warped Tour t-shirts, Emo Night Brooklyn teased them with the (in)famous G-note from the beginning of My Chemical Romance’s “Welcome to the Black Parade.” In light of My Chemical Romance announcing their reunion tour, it’s safe to say this was a great segway into Mayday Parade’s anticipated arrival.

The stage, with “Forever Emo” spray painted in white, turned blue in preparation for the headliner. In an immediate response, fans pressed against the barricade screaming and cheering, waiting to catch a glimpse of the band that hasn’t been on a solo tour since 2015.

After a short intermission, running onto the stage and being met with strong enthusiasm from the crowd, Mayday Parade moved quickly into their song “Oh Well, Oh Well.” Although the main vocalist Derek Sanders prefaced the performance with an announcement of his broken foot, it didn’t stop the musician from interacting with fans on both sides of the stage, as he danced with a microphone in hand.

“That’s what I’m talking about,” Sanders said as the crowd had its hands up singing along to “Piece of Your Heart” from the band’s album “Sunnyland.”

While the band took the stage as the main act, neon lights and colorful balloons decorated in crying emojis surrounded the group. These little elements added to the nostalgia of the show, as the band continued to play songs from the early 2000s. After massive amounts of headbanging to Mayday Parade’s cover of “I’m Not Okay (I Promise)” by My Chemical Romance, the band gave some context as to why it wanted to combine performing covers and its original music.

“These songs mean so much to us,” Sanders said to the audience. “These are the songs that we listened to when we started this band. These are the bands that we looked up to and it really means so much to be up here playing these songs.”

Mayday Parade then went into performing popular favorites such as “Mr. Brightside” by The Killers and “All The Small Things” by Blink-182. The member’s silhouettes darted across the stage, making sure to give each attendee an individual and unforgettable experience. Guitar players Brooke Betts and Jake Bundrick also strutted around the stage, moving effortlessly with their instruments. Throughout the concert, fans screamed lyrics to both the covers and originals — and in turn, Sanders pointed the microphone toward the audience, giving them their time to shine as well.

During the hour-long set, attendees acted as if every song was Mayday Parade’s last to perform, from the band’s number one hit “Jaime All Over” to a cover of “Sweetness” by Jimmy Eat World. The band then exited the stage, leaving the audience to chant their name, never wanting the night to end. To no one’s surprise, the band took back the stage and performed the energy-inducing hit “Jersey” from “A Lesson In Romantics.”

The band left the stage but not without leaving the audience on a positive note.

“Take care of each other, be kind to each other,” Sanders said as he ended the night.

Despite the setlist consisting mostly of music from a decade ago, the band created a night of nostalgia and left a lasting impact on an audience that isn’t quite ready to grow up yet — and to Mayday Parade, that’s perfectly OK.