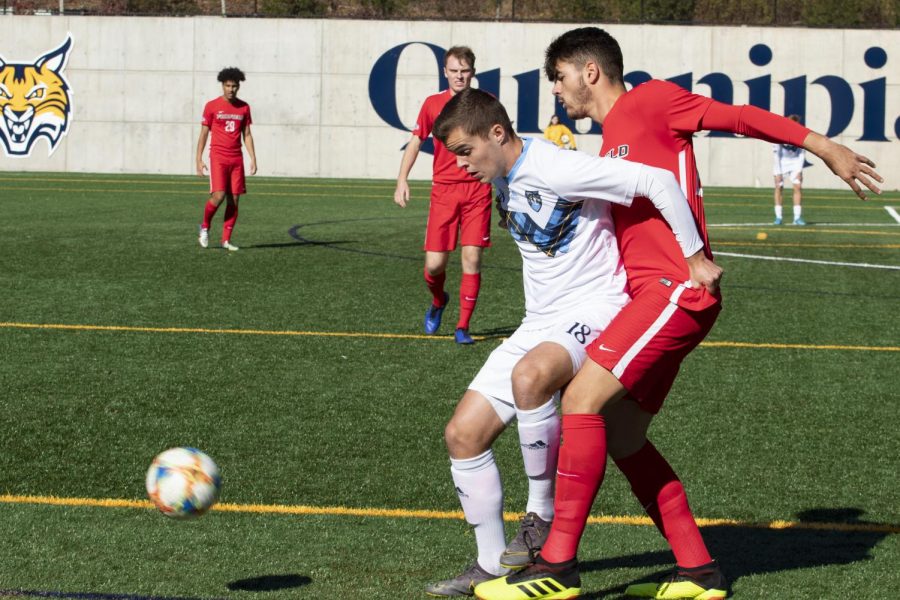 Freshman forward Tomas Svecula of the Quinnipiac men’s soccer team is making his goal of playing soccer while getting an education come true — and he’s doing it over 4,000 miles away from home.

Svecula, originally from Trencin, Slovakia, came to the United States and Quinnipiac in order to study while playing soccer — an opportunity he does not have in Europe. He is currently studying athletic training.

A former teammate who came to the U.S. and told Svecula about the opportunities that universities give their players. It was through this interaction that he realized there was a great chance for him to combine soccer and school.

Quinnipiac men’s soccer head coach Eric Da Costa received an email with video clips from a recruiting service that helps students like Svecula gain exposure to college soccer. At the time, Da Costa was looking for a forward and Svecula seemed to match the mentality Da Costa said he was looking for. He thought Svecula could really succeed here both on the field and within the team.

Prior to his inaugural season at Quinnipiac, Svecula was a two-year member of the Slovakian national team. He traveled often, playing teams from Germany, Ireland and other countries in Europe. This opportunity gave him lots of experience to expand his knowledge of the game.

“He’s played at a high level both in his country and also the national team,” Da Costa said. “We were able to get a really firm grasp of the type of player that he was.”

Perhaps the biggest challenge Svecula experienced was culture shock when arriving in the U.S., both on and off the field. Svecula noted people here are friendlier than in his home country. He was also told soccer here was played more aggressively.

Da Costa knew Svecula would have to adjust quickly to not only the culture, but also the intensity of college soccer. Typically, players from Europe play games over a longer period of time as opposed to the two or three games played per week in college soccer.

The question was: How Svecula could make that adjustment and still contribute.

The answer: Svecula jumped right in.

“His personality is fantastic,” Da Costa said. “He’s a funny guy, outgoing and he jumped into the culture and the fabric of the team from day one, and I think that makes it easier. When you’re comfortable and happy where you are, I think you’re able to perform at your level and higher.”

“It meets our expectations,” Da Costa said. “He was expected to contribute right away, play a big role, and he’s done that, so we’re happy with him so far.”

Svecula made his debut as a starter in the first game of the season against Boston College.

“It was a very tough game,” Svecula said. “Boston College is very good, but it gave me a lot of confidence. And after that game I was feeling very good. Every game I play now I am feeling more and more confident.”

In the Bobcats’ game against Saint Peter’s, Svecula scored the game-winning goal. The Bobcats were tied 1-1 with Saint Peter’s in double-overtime when Svecula found the back of the net in the 107th minute.

“When I scored, I was feeling so good, and I saw everyone running straight at me,” Svecula said.

Svecula said it is a different type of emotion and celebration when scoring here as opposed to his home country. He said when he and his teammates scored in his country, they did not celebrate as much, but here, everyone runs toward him and cheers.

He and his teammates are now preparing for their MAAC tournament appearance on Thursday, Nov. 14, at 1 p.m. against Iona. The Bobcats won their final regular season game against Rider and clinched the No. 2 seed in the MAAC tournament, which earned them home-field advantage in the semifinals.

The Bobcats hosted the MAAC finals last year but came up short against Rider. Svecula said the upperclassmen have talked about how disappointing it was to lose the finals last year and they do not want to feel the sting of losing in the finals in consecutive seasons.

With a winning mentality in mind, Svecula said he and his teammates are continuing to push each other in practice, and doing everything to 120%.

“Playoffs are coming,” Svecula said. “We are ready, and we are going to fight and do everything to make it to the NCAA tournament.”

Whelan said Svecula brings a confidence to the team that inspires his teammates.

“Obviously as a newcomer you can be a little nervous,” Whelan said. “But a freshman coming in and his counterparts saying, ‘Oh look at him doing what he’s doing,’ and the success that he’s having, I think that’s translated to them and their game.”

Whelan said Svecula has taught him different playing styles and movements on the field he did not know before. In exchange, he has taught Svecula the importance of a calm presence on the field and how to enjoy every moment played in the game.

“He’s got space to develop,” Whelan said. “But when he grows and develops, he’ll be a great player.”

In his upcoming seasons, Svecula has more to prepare for. His offensive game is his focus going forward. He wants to score more goals and tally as many assists as he can.

Ultimately, he wants people to know he can still do more. Da Costa also expects Svecula to continue to grow and develop.

“I want him to be himself,” Da Costa said. “I want him to grow into whoever he is and let his personality be genuine and authentic and let that shine. And however that role grows overtime, we’re prepared to allow that to happen.”