Did you ‘attend’ ‘Baltimore’? 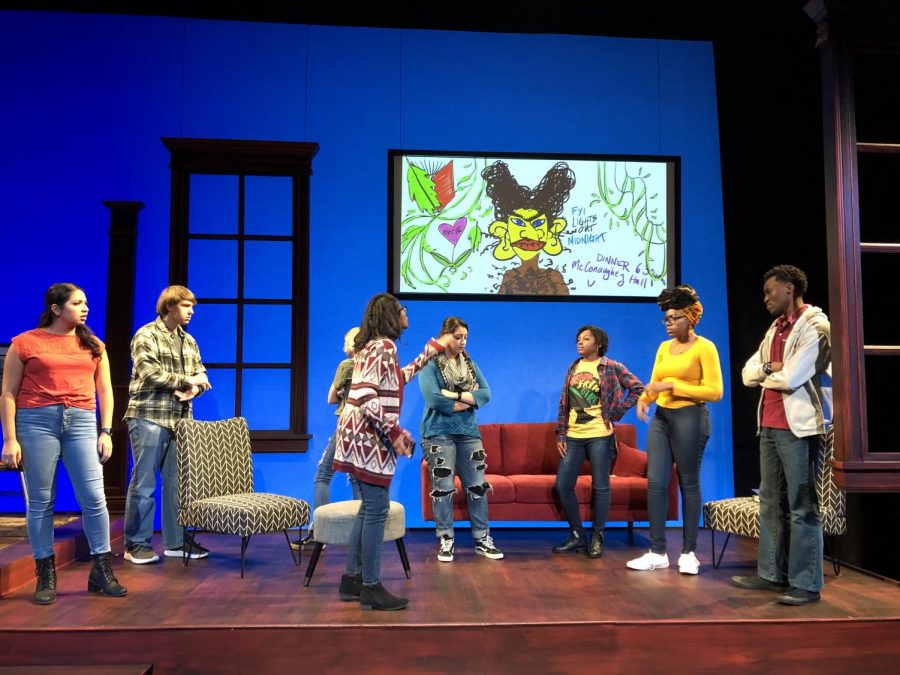 In the glow of a projector naming Quinnipiac the No. 1 university for “Little Class/Race Interaction,” Quinnipiac Theater brought the messy and uncomfortable side of race relations on college campuses into vibrant, unmistakable color.

Quinnipiac’s statistics on race relations faded from the screen, but the memory remained clear in the audience’s mind as the actors entered into the world of Sudbury University in Baltimore, Maryland, that just hired its first black dean.

“This play is very timely,” Sawyer said. “Not just for college campuses across the nation, but for our college campus, things that people are facing on our campus, so it is very real.”

Sawyer’s two kids attended the opening show on Thursday, Nov. 10, to support their father. His daughter, Safiyah Sawyer, is a 13-year-old attending Hamden Middle School. She said her father used to act when he was younger, but not recently. She agreed that the play has an important theme.

“I feel like it’s a closer look at things that are happening, different experiences for minority students,” Safiyah said.

The play started with Shelby, a resident assistant at Sudbury, meeting with Hernandez for an interview for the school paper. The interview didn’t go well because Shelby kept getting texts and calls from her residents. Shelby was also black, but she vehemently disagreed with Hernandez’s research and work regarding racial experiences and how race affects one’s identity.

Hernandez pushed Shelby to “attend” to life. He encouraged her to “attend” his lectures about race, “attend” to her residents and ultimately “attend” to her true identity. He didn’t want her just to show up and check off the boxes. Instead, he wanted her to absorb what it meant to be black, or white, or Latino and consider how these identities can impact one’s life.

Shelby believed race didn’t matter. Her childhood home had no mirrors, and she said her appearance was never emphasized as she was growing up. She expressed that when race enters the picture, things “get messy.” She majored in sports medicine because she only had to check off boxes and help patients — she didn’t actually have to think about race or anything deeper. Nothing ever got messy.

Shelby received a text alerting her that one of her white residents drew a racist picture on the door of one of her black residents. Shelby, instead of returning to her hall to face the problem, let her phone continue to buzz while chaos ensued among the first-year students. She took a nap on a bench near Hernandez’s office to avoid them.

Shelby’s best friend, Maryam, became frustrated with how Shelby hides from messy situations throughout the play. After seeing how Shelby avoided confronting the issue regarding the racist drawing, Maryam became angry with Shelby and asked her if she truly “saw” her.

Haneen Hamdan, a senior English education major, played Maryam in “Baltimore.” She defined being “seen” as understanding someone at a deeper level.

“If someone isn’t able to acknowledge every aspect that makes you, well you, then they aren’t seeing you,” Hamdan said. “Everyone has history behind them and being able to see these aspects of a person, then you are able to understand what history laps over onto them and what makes them, them.”

For some audience members, the idea of truly being seen is what resonated with them the most.

“The one quick phrase that stuck with me that kind of summarized the whole thing was when the gentleman said, ‘I see you, and I agree that you have worth. I see you, and I agree with that you  have worth,’” said Martine Middleton, mother of Tyrell Latouche, who played one of Shelby’s residents. “That really put everything together as to what everyone was trying to get across.”

For a while, Shelby wasn’t “seeing” anyone. No one understood this more than her resident, Rachel, played by Nicole Mawhirter, first-year graduate student in the physical therapy program.

Rachel was Latina and was extremely angry when she saw the racist drawing on her floor-mate’s door, because she understood how racist jokes aren’t funny. She told Maryam that Shelby was hiding from her problems and needed to face the music.

Mawhirter was adopted from Mexico as a baby, and she went to a primarily white high school. She said she has experienced first-hand how one’s race does affect how people treat others, so playing a Latina student at Sudbury hardly felt like acting at all.

“My grandma used to help out in the cafeteria when I was in elementary school, and I constantly got questions, ‘You don’t look like your grandma, are you sure she’s your grandma?’” Mawhirter said.

Mawhirter wasn’t the only actress who related to the character she played. Hamdan, who is Palestinian, also connected personally with her role. Hamdan, like Maryam, struggles with being a minority and balancing American lifestyle with the cultural demands from her family and religion.

During the scene when Maryam is begging Shelby, who she considers her best friend, to reassure her that indeed, she “sees her” Maryam sheds tears.

After the play, Hamdan admitted that these were real tears because this is a struggle she faces on a daily basis.

Hamdan is a first-generation American. Her parents gained political asylum because of the war back in Palestine.

“I am so blessed for what my parents have done for me, but the bullying is hard sometimes,” Hamdan said. “It’s hard to fit in, and you try to morph a little.”

Hamdan referenced her costume — leggings under ripped jeans — as an attempt to balance American culture with the demands of her religion. Neither Maryam or Hamdan wore a hijab. She said she wore a hijab in middle school, but someone ripped it off of her head.

“My parents kind of sat down with me and said, ‘When you’re comfortable, do it,’” Hamdan said. “‘We don’t want to push you, you already go through so much here.’”

While Shelby’s residents — white, black, Latino, Palestinian, gay, straight — were engaging in a passionate debate back at the hall about whether or not the drawing could be taken as a joke, Shelby finally woke up.

Well, it wasn’t quite that easy. She did, though, return to the hall to address the problem. For the first time, she realized that issues related to race wouldn’t go away, no matter how long she napped or put her phone on silent. The issues would still be there when she woke up. The issues would always be there. Sometimes, though, to address them, one has to get messy.

This play is timely in this particular moment at Quinnipiac. Just months after the Princeton Review rated the university No. 1 for “Least Race/Class Interaction,” the Office of Residential Life sent out an email to all students about, “the alleged use of derogatory and racist language by Quinnipiac students.”

Senior international business major Joy Alino said that being a black student at Quinnipiac is far from easy. Similar to the discussion in the play, she said it’s common for white students to assume minorities only got into college because of affirmative action.

“The one thing I was not expecting (to see in the play), not to the same extent, but how it reflects Quinnipiac in a way,” Alino said. “In the beginning, they were talking about their struggles as being seen as individuals and students and not being seen as quotas or exceptions. I can definitely talk from the black experience like at a predominantly white university like Quinnipiac to put your foot down and say, ‘No, I worked hard to be here.’”

Daymyen Layne, director for multicultural education and training, said administrators at universities like Quinnipiac should “sprinkle” the same kind of awareness about race that Shelby eventually developed by the end of the play.

“As they are going into adulthood, I think we try to sort of push the envelope with them in terms of their own development and growth, and we saw that with Shelby in real time,” Layne said.

The director of “Baltimore,” Aleta Staton said that having diversity on college campuses, like Quinnipiac, means nothing unless the diverse groups are interacting.