Veteran comedian challenges himself on the stand-up stage 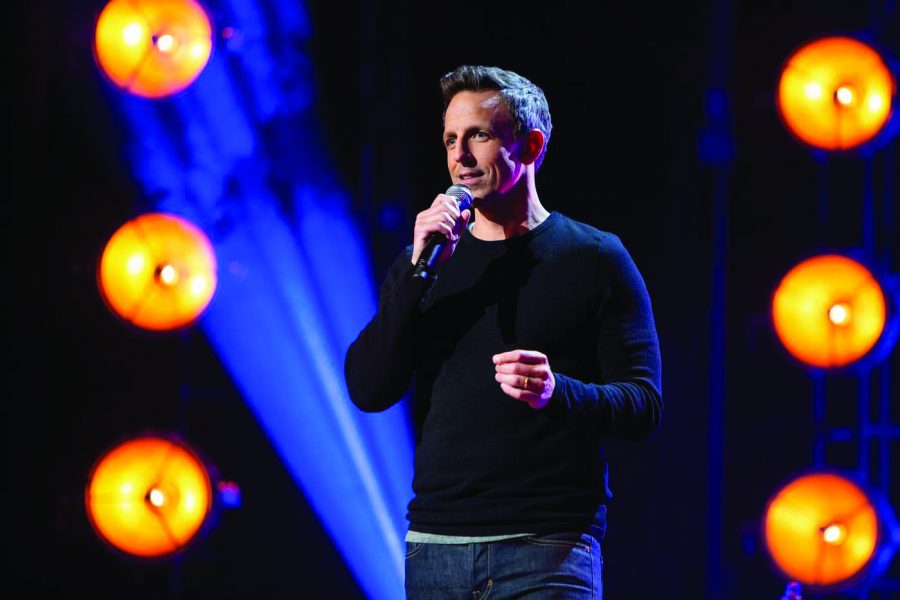 Seth Meyers' Netflix stand-up comedy special covered a variety of topics, including dating and the birth of his second child.

For years, audiences have seen Seth Meyers behind a desk donning a suit and tie. In fact, Meyers even likes to joke that they might not even recognize him any other way.

However, on Nov. 5, when Netflix released “Seth Meyers: Lobby Baby,” viewers saw a whole new comedian, and not just because of his long sleeve shirt and jeans.

Made famous from his role as an anchor on Saturday Night Live (SNL) segment “Weekend Update” and for his latest gig hosting NBC’s “Late Night with Seth Meyers,” the 45-year-old comedian decided to try his luck at his very first stand-up Netflix special.

“Lobby Baby” ran just over an hour long, but the quick quipping comedian made that time fly by. Majority of the topics Meyers covered in the routine were casual such as his family, a clear switch-up from his usual headline-grabbing content from his late-night talk show.

Meyers also had a recurring joke in the segment about “mansplaining,” and he introduces it each time by asking the women in the audience if they recall what it meant. The reason for the joke is a habit Meyers said he had with his now-wife during their five years of dating.

Five years of dating? Well, he touched upon that too, adding that it was way too long to keep her waiting before he popped the question. Meyers followed that up with acknowledging that any couple watching the special just had their night ruined, as even if the man was still looking at the screen after the joke, they’d definitely feel their significant other’s annoyed gaze locked in on them.

The bit the entire routine is named after, the delivery of Meyers’ second child, was also a zany tale. A few years after the birth of their first kid in an Uber, Meyers and his wife supposedly made arrangements to prevent something similar happening the next time around. Alas, when his wife felt her water break and they began to head from their apartment to call an ambulance, they couldn’t get much further than the lobby.

Again, the theme of mansplaining came up, as Meyers recounts assuring his wife that there was still plenty of time until he realized he was wrong yet again. Perhaps the joke that landed the best of the entire special, Meyers jokes that after speaking with an operator of 911, it may have been one of the first times the operator ended the emergency call with “congratulations.” The special even ends with a photo of Meyers, his wife, their newborn and a firefighter first responder laying on the floor of the apartment lobby.

Meyers’ clear strength in his standup is his family-oriented material. When he moves on to the topic of parenting, he thrives talking about how the ideal couple for him and his wife to hangout with has more than three kids. No matter what happens in the other room or how many crashing noises that can be heard, the experienced parents will shrug it off saying, “they’re kids, they’re gonna learn” or “kids will be kids.”

As the special was produced by Netflix, Meyers couldn’t avoid touching upon the streaming giant. During a set about cancel culture and the Catholic church, Meyers reminds us that the church’s solution for concerning priests is often to simply move them somewhere else. He jokes that, “when Netflix removed Kevin Spacey from ‘House of Cards,’ they didn’t move him to ‘Stranger Things.’”

Another way Meyers took advantage of his deal with Netflix was to implement the option buttons at the bottom made famous by “Black Mirror’s” “Bandersnatch.” When he moved to a more familiar topic of politics and President Trump, Meyers emphasized that he knows some audiences are tired of jokes about the current administration.

That’s when an option appeared on the screen to skip the political humor. After allowing a few seconds for viewers to make their choice, Meyers went on about our current president. Bringing church back up, Meyers added that Trump probably could never sit through mass and in a Trump impersonation kidded, “Jesus didn’t own any hotels” and that he couldn’t even get a room at the inn when he was born.

He also spoke about his roasts at the infamous White House Correspondents Dinner during Obama’s second term in office. He was mad at the time that he wasn’t getting headlines due to the killing of Osama Bin Laden, but now that articles are coming out that that night fueled Trump to begin his campaign for the presidency that “it’s all Obama’s fault.”

After the Trump jokes ended, Meyers decided to play a trick on those that skipped over the segment ending things on “so I think I misjudged him” and that he’s doing a great job, prompting people who skipped to be tricked into rewinding to watch.

The special was filmed during one of Meyers’ shows in The Pantages Theatre in Minneapolis. Meyers even enjoyed poking fun at the city throughout when he told a joke that almost fell flat but still garnered a few laughs adding, “I told them it would hit in Minneapolis.” Even though thousands of more viewers will watch from home instead, Seth Meyers still found a way to make “Lobby Baby” feel like he was performing right in your living room.