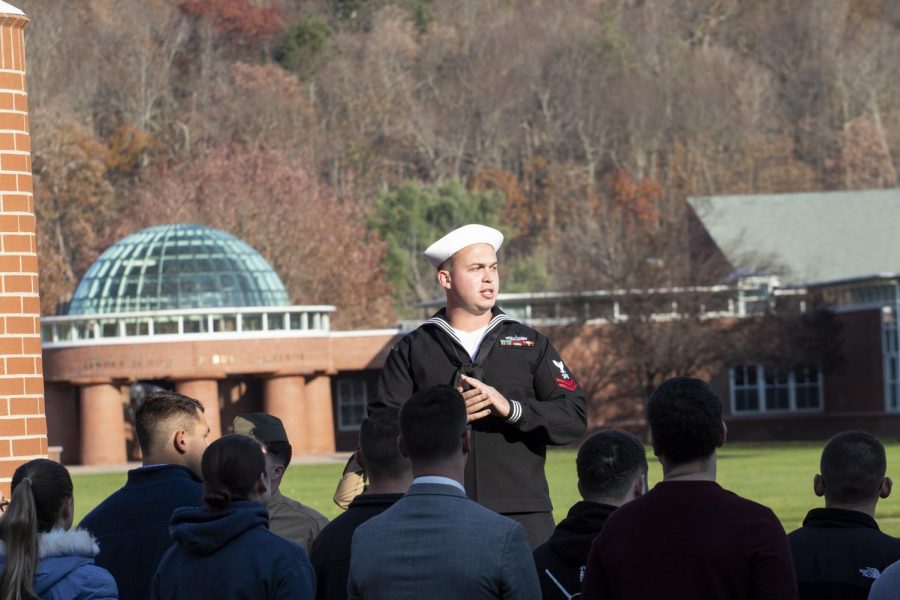 A small crowd gathered outside of the Carl Hansen Student Center on the morning of Nov. 11, for a flag raising ceremony run by the Student’s Veterans Association in honor of Veterans Day.

A group of student veterans, led by the Quinnipiac Student Veterans Organization president Colby Milliken, stood before the flagpole as three uniformed service members lowered the Quinnipiac flag and raised The National League of Families POW/MIA flag in its place. Among them was freshman Tyler Gorman, a video game design and English double major.

“I thought it was really nice, it was my first event participating at QU,” Gorman, a veteran, said. “It really shows how much of a community QU is.”

After the ceremony Milliken, a junior management and economics major, welcomed the crowd to participate in the Student Veteran Organization’s next event, Cup of  “GI-Joe,” and card signing for deployed service members. The veterans mixed into the crowd and socialized while a line formed to write messages in the cards.

These events were just the start of the Veterans Day week at Quinnipiac honoring veterans in a multitude of ways. Q-Factor is holding a talent show benefiting Homes for our Troops, which provides mortage-free homes for veterans. The School of Medicine is hosting a book club with speaker Jason Burke, director of veterans and military affairs. Additionally, the men’s hockey and women’s basketball teams are both offering discounted tickets for veterans, and the hockey team will wear special uniforms for its game during the week of Veteran’s Day.

The week’s events are part of Quinnipiac’s ongoing efforts to make the school as welcoming to veterans as possible.

“I believe (the school) supports us. They give us our own study session room. They help us with tutoring, our own librarian, they really go above and beyond,” Milliken said.

“The major reason (for Quinnipiac’s ranking) is the focus and dedication of our warrior scholars,” Burke said. “Their high retention and graduation rate is well above the national average and they support each other on their QU mission.”

The high scores in “Culture & Commitment” can be seen from the list of events for the week and support the community provides. Hamden Mayor Curt Balzano Leng declared Nov. 11, “Quinnipiac University Student Veterans Day” in the Town of Hamden. The university’s commitment to students also shows through the services it provides veterans, such as their own adviser.

“(Burke) helps us with finances for going to school and if were trying to get into classes that might be harder to get because were coming in as transfer students, they help us get that,” Gorman said. “Our professors are aware that we might have jobs if we live off campus so they work with us on that if we need an extension but you know, were older, we might have other things, like a family at home.”

President Judy Olian asked the student body to celebrate the veterans representing students, faculty and more. With over 200 veterans or current service members, including students and faculty, the Quinnipiac military community is a group that Olian said that the university is grateful for.

“We are inspired by our veterans as role models for their leadership and experiences, and for demonstrating their values as enlightened global citizens,” Olian said.