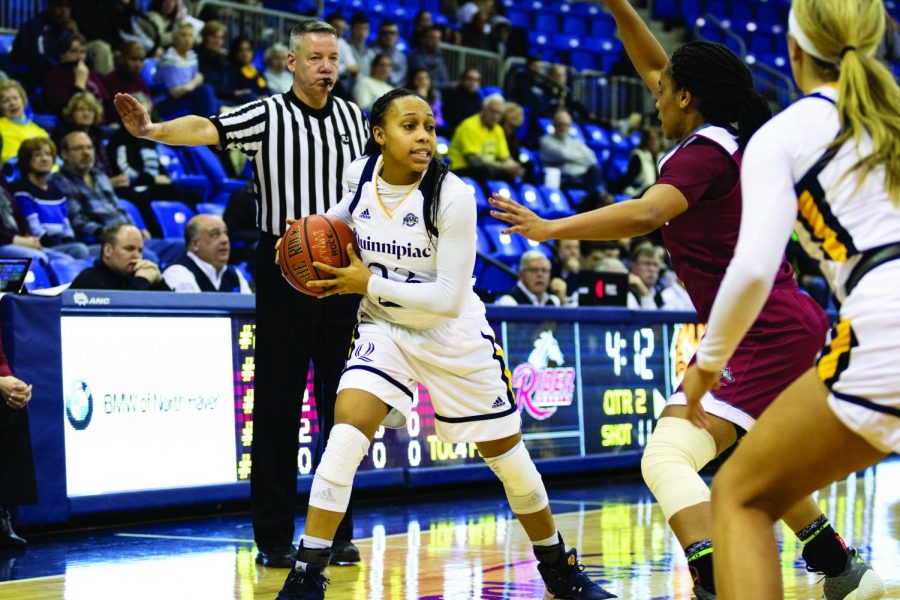 Former Quinnipiac student-athlete Brittany Martin could not legally profit from her name, image or likeness.

The NCAA should look at changing the meaning of its acronym to something more fitting.

Instead of the National Collegiate Athletic Association, how about the Never Compensating Athletes Association. This name is much more fitting regardless of the recent news it made.

On Oct. 29, the top decision-makers in the NCAA voted unanimously in favor of starting the process to change its rules to allow college athletes to profit from their name, image and likeness “in a manner consistent with the collegiate model,” according to Dan Murphy of ESPN.

In a media release, the NCAA explains that its top governing board wants these new rules to be “transparent, focused and enforceable” and in no way create a competitive imbalance. The NCAA wants each of its three divisions (Division I, II and III) to implement new rules by January 2021.

One month earlier in California, state Gov. Gavin Newsom signed the Fair Pay to Play Act, which will permit college athletes in the state to hire agents and accept endorsement money starting in January 2023.

The potential new rules from the NCAA would not follow the “California model” signed in September because that is virtually a free market said Gene Smith, Ohio State athletic director. He also said that the NCAA would likely stay involved to sort out the details and remain as the group in charge of regulating future endorsement deals of players.

The reality that the NCAA could potentially permit collegiate athletes to profit in any way from their fame is quite miraculous when you put into context that on Sept. 24, NCAA President Mark Emmert told a group of Division I athletic directors that granting athletes such rights would be an “existential threat” to the collegiate model and that this has been the “single biggest issue” in his tenure.

On its surface, this new stance from the NCAA seems to be a complete about-face from the years it has scoffed at the possibility of student-athletes openly profiting from their popularity. However, this new development from the NCAA should have been expected. It is not a form of progress but, in fact, a consistent persistence to deny worthy athletes what they deserve after making college sports a multibillion-dollar industry. Simply put, this is a stall tactic.

The timing of this news is apt because more than a dozen other states have expressed interest in creating policies similar to California for the schools in their states. The NCAA would loathe having several states with different rules for allowing collegiate athletes to make money from their name. The NCAA fears this would create a competitive imbalance and ultimately hurt its bottom line. The pressure on the NCAA becomes even greater when you consider that U.S. Congressman Mark Walker (R-N.C.) proposed a bill on the federal level that would force the NCAA to allow all college athletes to profit from their name without limitation.

The threat of any of these things coming to fruition in a two or three-year span prompted the board of governors to quickly make a counter move. And its counter is to appear as if it want to do what is in the college players’ best interests. But the true intention of the board is to alleviate some of the external pressure it has received from a dozen other states, and possibly Congress, as well as maintain control of its member schools.

The NCAA wants a level of control to put rules in place with such rigid limitations for athletes to receive endorsement deals that it fundamentally continues the unpaid labor that exists today.

In the NCAA’s public statement, it says it is looking at the process of changing the rules but “in a manner consistent with the collegiate model.” What is the collegiate model? One can make an argument that this model is amateurism, which contradicts the notion that these new rules should allow athletes to make money.

The possibly conflicting and ambiguous language in that phrase is only part of a complete statement that is absent of any details in regard to how the NCAA will allow athletes to earn endorsement money. Even the athletic director of Ohio State said the NCAA does not want a free market of endorsements for athletes. Why you might ask? Because, again, it forfeits some control of its commodity: student-athletes.

Athletes currently not being paid for their name is not the root of the problem, it is only an egregious aspect of the bigger issue. Those who think the current model is abhorrent, know that the real dilemma is that everyone in college athletics amasses wealth with impunity while the countless young athletes responsible for the creation of a more than billion-dollar industry make nothing.

The founder of the National College Players Association, Ramogi Huma, said, “The NCAA has failed on this issue once again. This is another attempt at stalling on this issue.”

The only silver lining that exists is a point made by The Atlantic’s Jemele Hill. This future rule change could benefit star women athletes who usually don’t have the same professional opportunities as men and whose maximum earning potential occurs during college. Their peak popularity comes while donning a college uniform. A perfect example is former UCLA gymnast Katelyn Ohashi who pointed out in The New York Times, how she wasn’t able to strike while the iron was hot.

“The NCAA is a billion-dollar industry built on the backs of college athletes,” Ohashi said. “How different would things be for me had I been able to use my image and name my last year of school in order to promote the things I want to further my future? I want to make sure the next person doesn’t have to wonder.”

Regardless of any residual benefits that could occur if the NCAA holds to changing its rules to allow players to make money from their name, image and likeness, that is not the justice deserved. Until the NCAA creates a policy that outright pays college athletes who fuels this billion-dollar business, fairness will never come to pass.

As Martin Luther King Jr. said in his letter from Birmingham Jail, “justice too long delayed is justice denied.” The stalling the NCAA has engaged in should be interpreted as another refusal to provide equity to its players.