The university should allow students to opt into gender-inclusive housing 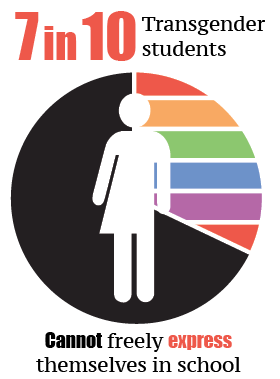 For many LGBTQ youth, growing up is just a waiting game — waiting to leave an oppressive home, school or town and go somewhere where they can freely be themselves. For many, the first chance they have at this is college, but only if the institution they are attending is committed to making them feel safe. When it comes to housing options for LGBTQ students, Quinnipiac falls short of this.

When it comes to picking a college, knowing that they will be accepted and supported is imperative to LGBTQ applicants. During my own college search, I could be found browsing countless Reddit and College Confidential threads as well as websites like the Campus Pride Index (which Quinnipiac does not appear on) to try and get a sense of what life would be like at schools as a queer person.

Once I decided to come to Quinnipiac, I went through the same worries that most first-year students probably do before living on campus. Would my roommates and I be similar enough? Would we be friends? How would I decorate my room? Should I pack my winter coat and boots now?

Sure, thinking about these questions was stressful, but it was nothing compared to the other worries on my mind. What would I do if my roommates were uncomfortable living with a queer person? What if they were outwardly homophobic? Should I pack my pride flag? How “out” should I be?

These worries followed me on campus and through a good part of my first year, as I’m sure they did for many other LGBTQ students. For some, especially those that are transgender, living in a dorm means hiding one’s identity, or risking their safety by being out. I was lucky enough to be in a good situation and made friends both inside and outside my dorm that supported me and made me feel good about being myself. For other LGBTQ students, living in a dorm doesn’t always have such a positive outcome.

Before they even come to college, transgender, nonbinary and gender-nonconforming students struggle with feeling accepted at school. In its 2018 Youth Report of students aged 13 to 17, the Human Rights Campaign (HRC) found that only 31% of transgender students can completely express themselves and their gender identity at school. The same report also found that only a third of trans students are always being called by their true name and even less are being referred to by their pronouns.

LGBTQ teenagers also reported feeling more stressed than their peers, and their experience in school included higher rates of verbal, physical and even sexual harassment because of their identity.

Therefore, it’s not surprising why how we’ll be treated at college is so important to us. It’s a place that should make us feel welcome and safe, not worried.

Currently, at Quinnipiac, transgender students are protected from discrimination by our Student Code of Conduct as well as our Title IX policy. These policies are fine when it comes to incidents that involve direct bias because of someone’s identity, but the policies don’t do anything to help students who live somewhere they don’t belong. Quinnipiac’s current on-campus housing system separates students, either by room, suite or hall based on the gender they were assigned at birth, something that inherently excludes the multitude of students whose true identity doesn’t align with the genitals they were born with. Currently, Quinnipiac makes individual housing accommodations for transgender students on a case-by-case basis.

According to Quinnipiac’s policies page, Residential Life will discuss “type of room, bathroom facilities and roommate matching options, after which a housing assignment will be made,” with “students who have a gender or gender-identity related concern regarding university housing.”

What happens to students that aren’t out to their family, or who aren’t comfortable reaching out to request these accommodations? This can put students in a compromising situation with their family when they have to explain why they are living in a different housing setting than everyone else.

For returning students, it makes the already stressful housing selection process even more difficult. One of the options available to transgender students include being placed in a single-person apartment on Whitney. If they want to live with friends and have a traditional dorm experience, they have to disclose their identity to everyone in their housing group, and Residential Life will manually put the housing group together.

Finding the right number of people to fill a suite is already hard enough for rising sophomores and juniors without having to come out to every person you ask to join your group. Coming out is an extremely personal decision, and LGBTQ people should always get to choose how and when they come out and to whom. Having this decision taken away from students just so that they can live where they will be comfortable just isn’t fair.

Quinnipiac needs to commit to supporting its LGBTQ students and expand gender-inclusive housing to on-campus dorms. As an orientation leader, I have the privilege of helping introduce dozens of new Quinnipiac students to our school. During orientation, we take our groups of first years to different presentations that teach them about the culture, policies, and life at Quinnipiac

I would sit with my first years every session as the Office of Residential Life told them about housing policies, choosing roommates and showed them photos of all the different residential halls. They would explain that incoming students don’t get a preference of which building they live in, but don’t worry, because “It’s not where you live, but who you live with that’s important.”

What if the people you live with make it hard for you to express your identity? For a university of the future, Quinnipiac is actually quite behind the times when it comes to the inclusivity of its housing.

Some people try to argue that allowing different genders live together will cause issues because students in relationships will live together. This concern, aside from being harmfully heteronormative, has not been an issue at other institutions. What these institutions have seen instead, is a great deal of success. Just in Connecticut, University of Connecticut has offered gender-inclusive housing since 2008, Southern Connecticut State University since 2012, and Yale, who’s gender-inclusive housing options have been expanding since 2010, finally opened it to first-year students with the class of 2022.

In a report on the new option for first-year students, Yale’s Dean of Student Affairs, Camille Lizarríbar said she “heard no complaints from students” and even parents “stayed supportive, even if they had initially been surprised and worried.”

One of the first-year students living in a mixed-gender suite told Yale News, “I think it’s so important for people to experience living with both genders. It helps us all see that the differences we thought were there, mostly aren’t.”

Hundreds of universities across the country have reported similar success with their programs and have expanded them due to the popularity. Yet Quinnipiac has barely scratched the surface with its own process.

While gender-inclusive housing would be a great step towards the university supporting LGBTQ students, it’s not the only group that would benefit from it. Many friend groups in college are made up of multiple genders, yet the only way they could live together would be in an off-campus house, taking underclassmen or students without their own car out of the running.

University of Connecticut states on its gender-inclusive housing page that the program is not only for those in the LGBTQ community but also for “students who appreciate the learning and growth stemming from experiences with gender diversity.”

By allowing all students to opt into gender-inclusive housing, Quinnipiac will be allowing students to have a more diverse and fulfilling college experience, where they will meet more people that come from different backgrounds and have different experiences and ideas. The program would also help promote general inclusivity on campus, as it would normalize mixed-gender housing groups, so that it is no longer something “for trans students,” and instead something everyone who wants to can partake in.

However, I shouldn’t have to justify having inclusive housing by stating how it could also help cisgender and straight people. Quinnipiac’s Student Body Creed claims that it “respects and values all members of this diverse community,” but its policies don’t go the distance to reflect that. It shouldn’t be a hard choice for Quinnipiac to do something that would protect and support so many of its LGBTQ students, and it’s time for it to make some changes.