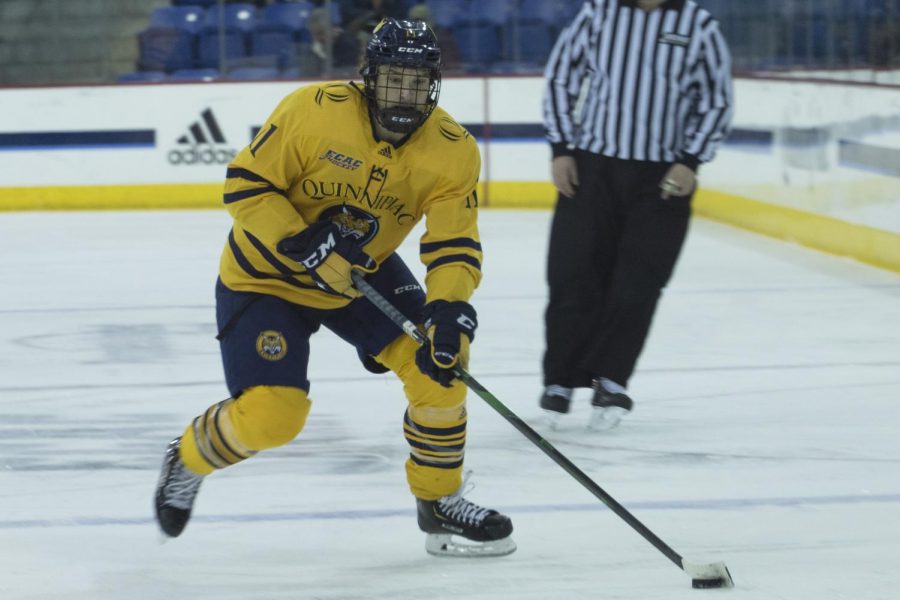 For the first time since 2012-13, the Bobcats head into ECAC Hockey action coming off of a loss.

The Bobcats started the season with back-to-back victories over AIC, followed by a disappointing split to Maine. Quinnipiac looked strong in a win against Vermont, but this past weekend, the Bobcats went across the country to the desert and were swept by Arizona State.

“It’s an easy question to answer, we did not play well,” Quinnipiac head coach Rand Pecknold said. “I could spend a day talking about what we didn’t do well. I mean in the end, we just struggled. We didn’t play well as a team in pretty much every area.”

As a result, the Bobcats have now dropped out of the top 10 in the USCHO polls, currently sitting at No. 15.

Everyone knew that this 2019-20 team was not going to be the same as the team that was No. 1 in ECAC Hockey and was one win away from a Frozen Four appearance just one year ago. I’m not sure people expected this much of a difference.

Granted, yes, it is still early in the season. Conference play is just getting underway. Still, there are some glaring differences that are hard not to worry about.

We’ll start with the power play. Of course, when you lose players like Chase Priskie, Brandon Fortunato and Brogan Rafferty, the power play isn’t going to be the same. Priskie was lethal with the one timer on the left side, Fortunato had the ability to work the blue line well and Rafferty had a great shot to combine with good vision from the point.

Coming off a season where it converted on 25.7% of its power plays, which was tied for fourth in the nation, Quinnipiac is just 4-for-36 to start the year. That’s good for a lowly 11.1%, that’s ranked 46th out of 60 Division I college hockey teams.

This past weekend, Quinnipiac scored just one goal on their 10 power play opportunities, including no goals off a five-minute power play. Outside of the seven shots on that power play, there were a combined eight shots on the other nine. It didn’t help that in Saturday’s contest, the Bobcats were on the man-advantage and twice took a penalty to nullify the power play.

“We’re getting good looks, I think it just hasn’t been clicking yet,” redshirt freshman forward Guus van Nes said. “As soon as we get that first one, we’ll be rolling, guys will get more confident.”

Another aspect of the game the Bobcats have struggled in? Defensive scoring. Through seven games, the seven defensemen that have dressed have accounted for 12 of the 56 points scored by Quinnipiac, and six of those points have come from sophomore Peter DiLiberatore.

In comparison to last year, Fortunato recorded 10 points through seven games, Priskie had nine and Rafferty had seven. Quinnipiac has been known for its point production from the blue line in recent history, but the new core has gotten off to a slower start to the season.

This is mostly due to the fact that defensive group is made up of almost entirely sophomores and freshmen. With that, the focus has shifted to developing defensively before they can contribute to the offense.

“It’s pretty rare that you get that (offensive production) from defensemen,” senior forward Nick Jermain said. “I think right now, we’re not worried about that from our (defense). Our issues have been on the defensive side, and that’s obviously more important right now. For them, they have to get up to speed and get better. We have a young (defensive) core that needs to learn the defensive side of the game before they move forward.”

It hasn’t been a slow start to the season for junior forward Odeen Tufto. He’s on pace to once again eclipse 40 points this season, a feat he achieved his first two years at the collegiate level. In the first seven games, he has nine points, which leads the team — but they’re all assists. Despite being tied for second in the nation in assists, it’s the zero in the goals column that perhaps stands out the most.

“But there’s no point in me getting frustrated when I’ve been getting scoring chances every night and making plays. That’s the type of player I am. If I keep doing what I’ve been doing, one is going to find its way.”

Tufto may not say he’s frustrated, but the emotion is there. During Quinnipiac’s 4-0 win against Vermont, early in the second period Tufto was left alone back door. Van Nes fed Tufto the puck and it looked like an easy tap-in for Tufto.

Instead, the puck slid under his stick and into the corner. When Tufto came to the bench, he went down the tunnel and snapped his stick in half.

“He’ll get his goals, he’ll be fine,” Pecknold said. “He’s a really good offensive player, and (the goals) will come for him.”

Speaking of no goals, senior Alex Whelan has been held pointless this season, but that’s because he’s spent five of the seven games watching from the stands. After playing the opening AIC series, he has been out with an injury since. Whelan finished in the top five on the team in points the last two years. He’s a speedy veteran that loves to shoot — he led the Bobcats in shots on goal in 2018-19.

“In the end, we need to get (Whelan) back,” Pecknold said.“He’s one of our better players. He does a lot, power play, penalty kill, four-on-four. He’s a lot of our identity. I think it’s been good, some players have gotten more ice time, but we need Alex back in the lineup.”

It remains to be seen if Whelan will be available when Quinnipiac kicks off ECAC Hockey play this weekend against Dartmouth on Friday, Nov. 8, and then Harvard on Saturday, Nov. 9. Quinnipiac split the two-game series with both teams last season.

“Going into this weekend, we have to understand that it’s the first game of ECAC (Hockey) and this is the start of a track towards another Cleary Cup,” Tufto said. “We’ve got to go in and just buy-in and play to our identity and just try to fix around what happened this past weekend and just bring in the right effort and right attitude.”