All the ‘Rage’ these days 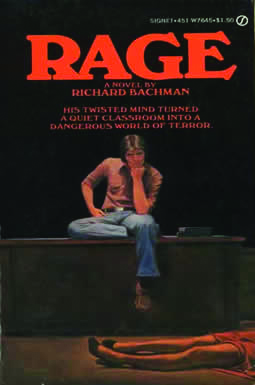 The spring musical, 'Rage,' is based off of Stephen King's novel of the same title.

This year, Quinnipiac University will be putting on its spring musical, “Rage,” which is based off of the Stephen King novel of the same name, about a school shooting. Beth Dinkova, the director of the musical and an alumna of the Yale Master of Fine Arts directing program, knows King and was given his permission to adapt the book into a play format.

Quinnipiac’s theatre program director and professor Kevin Daly, was hesitant about performing the sensitive material at first but Dinkova convinced Daly to move forward with the production.

“This is a problem in this country and if artists and educators aren’t willing to talk about it, who will?”  Dinkova said.

A lot of people have been getting involved in the preparation for creating the musical. Dr. Tom Pruzinsky, a psychology professor, connected Dinkova and Daly with many sources in order to be able to put on this play. One is Scarlet Lewis, the founder of the “Jessie Lewis Choose Love Movement” that was created after the loss of her son at Sandy Hook. Another is Don Sawyer, vice president for equity and inclusion, and the last is, George Sprengelmeyer, the director of the music program and the chair of visual and performing arts.

“We’ve all been working together to develop programming that will run parallel to the production to foster the conversations about mass shootings in a meaningful way,” Daly said.

The musical will spark conversations about rage, empathy and societal healing through raising different questions that people normally don’t think about.

“What is the difference between teens who decides to commit horrible acts, and their counterparts who can write intimate and personal stories about violence (like King himself) but not enact it?” Dinkova said. “I think one of the differences is art: finding the opportunity to express yourself freely and honestly, without judgment, and to exorcise your demons, a journey all characters in the play go on. If we can confront and heal from what makes us afraid and uncomfortable through art, (especially if we can sing about it), then we can find a way to heal.”

Daly also believes that being a part of this particular musical can be very impactful and meaningful. He believes that a student who performs in a theatre production will gain benefits that will help them after graduation.

Being in a musical can also help with public speaking skills and developing empathy by putting yourself in someone else’s shoes.

“Rage” calls for 11 characters and each audition is two minutes long. Auditions will be held in the Echlin Center on Nov. 19, from 7 p.m. to 10 p.m. Students will read from a monologue and sing a song that best fits and showcases their vocal skills. Even though it’s strongly encouraged that students prepare their own monologue and song, students who did not prepare will be given a monologue and song to audition with. Tracks, singing a capella or working with the accompanist can be used for the auditions.

For students who do not want to audition, but still want to be a part of the musical, there are still plenty of opportunities to get involved. Those who are interested can email Abigail Copeland ([email protected]).

“There are a ton of opportunities off stage as well,” Daly said

If Daly could say anything to a student who’s considering auditioning for “Rage,” he’d tell them to do it.

“This is the time to take some risks. You’re in college. You’re not going to have a lot of opportunity in the future to do this type of thing,” Daly said. “Anyone who has an interest in performing arts, I encourage them to get involved. If they have any questions they can reach out to me to talk or learn about their options.”

Tickets for “Rage” are already on sale on Theatre.QU.edu.