Quinnipiac drops its first game of the season to Drexel 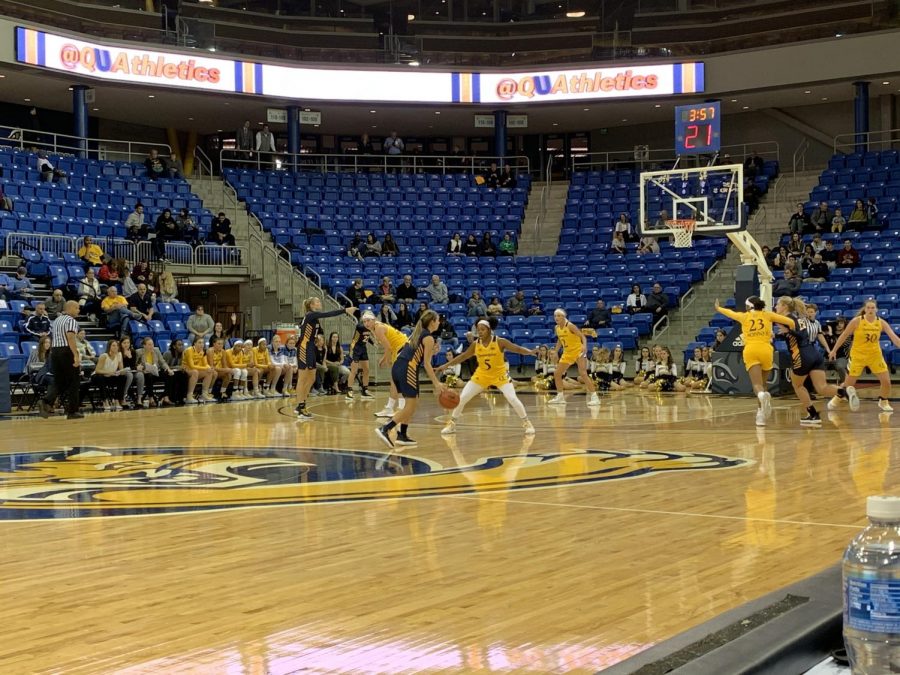 In an energized People’s United Center, the Quinnipiac women’s basketball team came up short Tuesday against the Drexel Dragons 66-62 in the first game of the season.

Quinnipiac senior forward Paige Warfel talked about how the team could look into a couple areas to improve on so that the team can put themselves in better situations later on in games.

“I know early on a lot of us got into foul trouble, and we are going to work on that,” Warfel said. “We also have to get on the boards. They had way too many offensive rebounds and putbacks and if we limit that, we could have had a better chance in winning.”

Defensively, junior guard Shaq Edwards had her opponents locked down, recording six steals. However, her efforts could not stop, senior forward Bailey Greenberg who led the Dragons with 31 points and 12 rebounds.

The Bobcats opened the game on a 6-0 run thanks to some early points from Warfel, freshman forward Sejada Bonner and Edwards within the first three minutes of the game. During that run, the Dragons shot 0-11.

Though the score showed the Bobcats winning, the Dragons were out performing the Bobcats, as they were hustling to the ball more and out rebounding Quinnipiac in the first quarter 13-10.

Quinnipiac head coach Tricia Fabbri harped on this area, saying that the team needs to go back to what it does best, as well as cleaning up other parts of its game.

“We need to address rebounding,” Fabbri said. “That was our strength back then, and I feel like we lacked it today. I also feel like we got into foul trouble early and we got a little hitchy. I really think that we could get better at every facet of the game. We could get a lot cleaner, a lot smoother, and you are going to see that unfold as we continue to go deeper into the process.”

Despite being outrebounded in the first quarter, the Bobcats led the Dragons on the scoreboard 15-13.

The Dragons were able to take their first lead of the game early into the second quarter. From there, the score seesawed back and forth. In the last five minutes of the second quarter both teams traded baskets until Drexel pulled away with a minute left in the quarter. The run included a buzzer-beating post shot from Greenberg to go into halftime up 33-28.

Heading into the third quarter, the Bobcats came out with the same urgency and confidence they did to open the game. To counteract the Bobcats’ momentum, Greenberg went on a run of herself, scoring seven straight points for the Dragons to give them a 47-45 lead at the end of the third quarter.

Going into the fourth quarter, the Bobcats were able to rally back and tie the game at 49 two minutes in. However, it was the Dragons’ defense that closed the game out, as it was applying double teams to force turnovers and held the Bobcats to under 40% from the field.

At one point, the game seemed all but over. However, the Bobcats had other thoughts. Herd scored an and-1 to cut the Dragon’s lead to three points.

Since the Bobcats had to stop the clock, they intentionally fouled Greenberg, who made both her free throws before Bonner drew a foul of her own to cut the lead back to three. The Bobcats had an opportunity to tie the game with a three pointer, but Herd missed the shot.

Herd talked about the moment, and rather than hanging her head low, she learned about how much trust Fabbri had in her.

“That play was great for us,” Herd said. “I thought it was a pretty good look and I kind of lost the pass while it was coming through, and I had an opportunity to score but was not able to capitalize on it. I am really happy that coach trusted me with that shot and I am looking to make the next one.”

The Bobcats look to get their first win as they take on the Yale Bulldogs on Wednesday, Nov. 13, at 7 p.m. at the Lee Amphitheater.