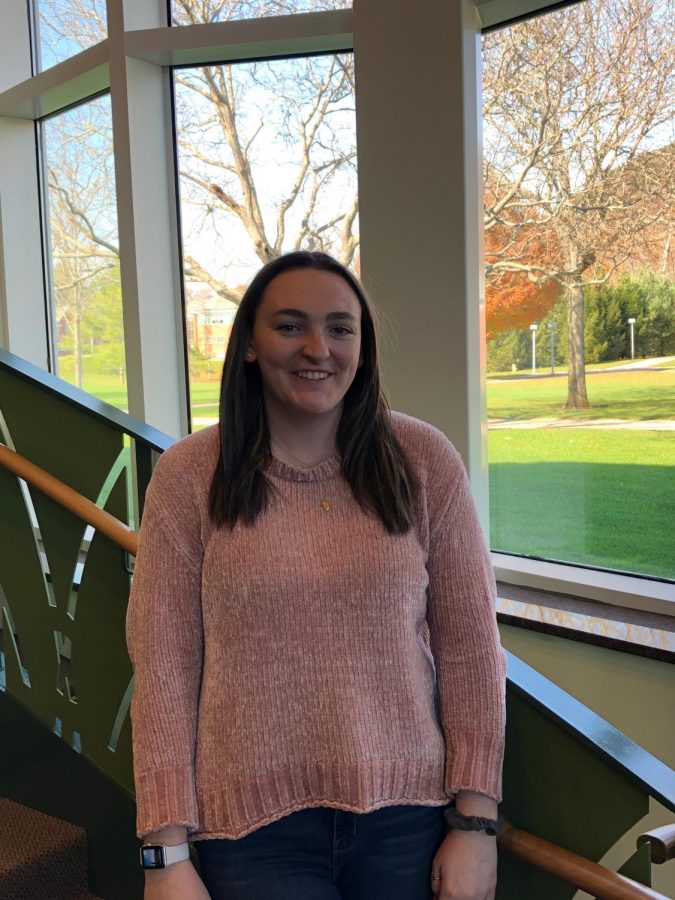 SGA surprised Liz Flynn with the honor while she was photographing a soccer game.

When senior media studies major Liz Flynn went to work as a photographer at the Quinnipiac men’s soccer game last Saturday, she thought it was going to be just another day taking pictures for the athletics department.

Little did she know, this time, she would be on the other end of the camera – and one of the biggest highlights of the day.

“I’m standing around waiting, and then there’s announcement coming over the loudspeaker,” Flynn said. “Then, all of a sudden, I hear my name and I’m very confused.”

It was in that moment at halftime during the game that Flynn was named as October’s Bobcat of the Month. Swarmed by balloons, banners and even fatheads of herself, Flynn was engulfed by friends in her Chi Omega sorority.

“They all just ran out onto the field and I was like, ‘Are you kidding?’” Flynn said. “I couldn’t believe it. I was pretty much frozen in my spot.”

Flynn has built up quite the resume in her time at Quinnipiac. She is the secretary for the Chi Omega sorority, the vice president for the Quinnipiac Bobcat Sports Network, the marketing director for Q30 Television, a photographer for Quinnipiac Athletics and also a member of the Association for Women in Sports Media.

“(Flynn’s) involvement really stood out to (the Student Government Association),” said Jamien Jean-Baptiste, the vice president of public relations for SGA. “The fact that the athletes depended on her to take pictures at the game, that’s something that really fit the criteria.”

Jean-Baptiste explained that SGA had a slightly different policy this time around for picking the Bobcat of the Month. They created a rubric that they would go through and give specific scores for certain categories such as academic excellence, extracurricular involvement and sports excellence, all while the names of the students remained anonymous.

Due to Flynn’s strong involvement in student organizations, it comes as no surprise that the person who nominated her, senior advertising Christina Vittas, works with Flynn in those groups. Vittas is the Chi Omega president and also the Q30 entertainment director. Ironically, the two had discussed it when SGA first announced it the revival of the award back in September.

“If there could be a Bobcat of the Month every month, it should be Liz Flynn,” Vittas said. “She really does it all and never complains about all that she does. She’s such a great role model and just so driven and it amazes me every single time.”

While Flynn will enjoy the $250 gift card to the bookstore, she knows this recognition is something she’ll remember forever.

“I know I do a lot on campus and I’ve been really lucky to be put in leadership positions, but I’ve always been that way,” Flynn said. “I love being involved and doing things for others and just trying to better myself and the Quinnipiac community because this is the place that really gave me my career and gave me everything that I really need to do for my life.

“Thinking that people look at me and think that I did deserve something like this is surreal and I definitely won’t take anything like that for granted.”