A break from Centerbrook 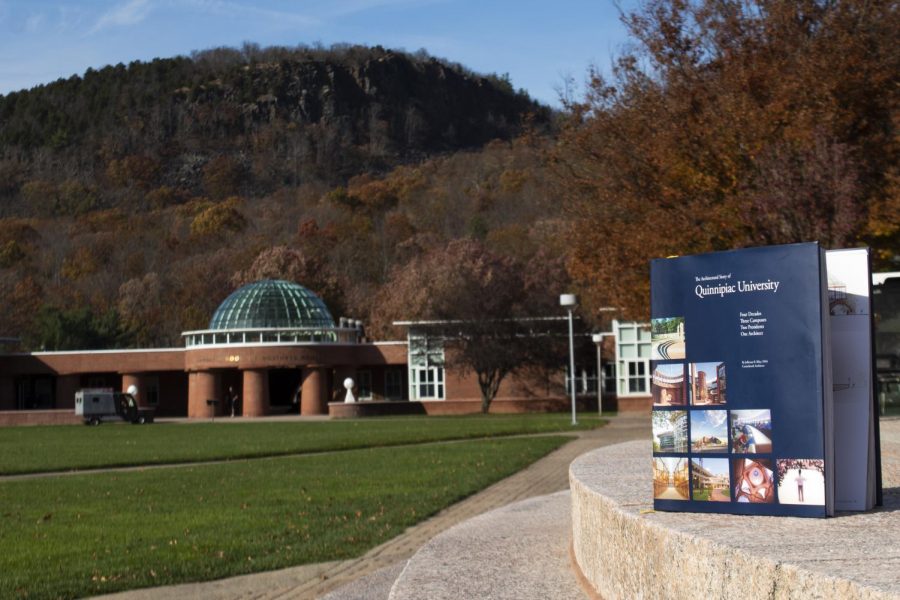 Centerbrook, an architectural firm nestled alongside the Connecticut shoreline, has been designing a majority of the Quinnipiac campuses for the past 40 years.

When President Judy Olian came to Quinnipiac in 2018 with a new vision and accompanying strategic plan for the university, Centerbrook hoped to continue playing an integral role in drafting the next chapter of Quinnipiac’s history.

While Centerbrook made it to the final four firms, it ultimately was not selected to draft the plan, a sharp break with the firm that designed the Quad, Echlin Center and other iconic aspects of the university.

“We didn’t part with them,” Sal Filardi, vice president of facilities and capital planning, said. “What we were doing was we’re expanding the resources available to the university.”

Ayer Saint Gross, an employee-owned design firm based in Maryland, was chosen to complete the master plan instead of Centerbrook.

Previously Centerbrook was commissioned by Quinnipiac in the summer of 2013, prior to Olian and her strategic plan, to prepare a master plan, according to Jeff Riley, principal in charge of all Centerbrook work related to Quinnipiac.

Riley explained that the 2013-14 plan was relevant and useful based on former Quinnipiac President John Lahey’s plan for the university and his leadership style.

“Essentially, Dr. Lahey devised a strategic plan along the way as opportunities and urgent needs arose,” Riley said. “The plan we delivered in the spring of 2014 was, nonetheless, nearly 400 pages long and in two volumes and was devised to accommodate the future – ‘A Living Master Plan.’”

While the university paid Centerbrook almost $8.4 million in the fiscal year ending in June 2014 according to the 990 form, Riley could not say how much the university spent on the plan it ultimately did not use. The 990 form is the university’s public tax filing.

Filardi said that while the university has paid Centerbrook for planning projects through the years, it was never paid to create a master facilities plan that aligned with the new strategic plan.

“We have paid Centerbrook over the years for different planning efforts and, yes, Centerbrook, as the author of the planning, can say they did the planning for us, but, no, we do not have a comprehensive master plan based on the new Strategic Plan or our current and future needs that can guide us going forward,” Filardi said.

Filardi said the plan Centerbrook proposedwas not so much a plan, but a collection of prior designs.

“I think Centerbrook has taken all the things they’ve done over the years and put it together and called it a master plan, but it’s more of something they put together,” Filardi said.

Riley said he hoped Centerbrook’s plan, as a “Living Master Plan,” would have been chosen by the university despite the change in leadership.

“The big difference between our plan from 2014 and today, as I said, is that there is now a strategic plan in place thanks to Judy Olian,” Riley said. “It was hoped, however, that our ‘Living Master Plan’ would accommodate any number of future strategic plans.”

The first volume of the 2014 plan displayed a 3D model of every space available on all three campuses, noting the functionality and available resources at each. It included a projection of all space needs the university would face in the next 10 years, based on how much each space is used.

Centerbrook used this information to figure out which areas needed to construction or expansion.

The second volume scoped out all the potential places where new buildings could be built, analyzing the pros and cons of each space.

The plan also called for expansion of the current recreation center on main campus. Proposals like these eventually conflicted with Olian’s strategic plan, which called for one holistic health and wellness center that would encompass recreation and medical and mental health care. Centerbrook was not chosen to design the new health and wellness center, which is being designed by designLAB architects in Boston.

Each of these proposals from Centerbrook, along with the original master plan, were included in a lengthy book by Riley called, “The Architectural Story of Quinnipiac University–Four Decades, Three Campuses, Two Presidents, One Architect.”

Centerbrook was the primary architect, for a while at least. Filardi said in the past 10 years, Quinnipiac has been working to include other architects besides Centerbrook.

Riley said he was surprised and disappointed that Centerbrook was not chosen to draft the newest master plan given its history with Quinnipiac.

“I only hope the new master plan adheres to some of what I believe has made Quinnipiac a very special place, unlike any other I am aware of,” Riley said. “It is a place that has become beloved by many people, and it would be a tragedy if its magic was smothered or lost entirely. It can happen.”

One chapter of the architectural story is titled, “Where Quinnipiac Goes From Here.” The chapter includes the master plan that Centerbrook created in 2017, derived from the 2014 version. This was the one that Quinnipiac saw during the interview process that selected Ayer Saint Gross.

The book includes simulated drawings of a field house, Greek housing, a wellness center and chapel and other blueprints. The drawings take into account existing buildings, which are colored in purple, and yellow buildings which are the projects under consideration.

These 16 pages of the heavy, hard-cover Quinnipiac history book detail a, “formula for success.” The book warns of what can happen when campus master planning goes poorly.

Riley pointed out that the following chapter, by Chad Floyd, the founder of Centerbrook, is about lessons learned by other colleges during the master planning process.

Riley said this should serve as a warning to Quinnipiac as it starts a new chapter with a new architectural firm.

“The new construction should be close to the central crossroads of the campus,” Floyd wrote. “Reset projects can provide sweeping rebirth for campuses that have lost their way … Resetting also can introduce a denser pattern of development, making more efficient use of land resources.”

Centerbrook is still working on several small projects across Quinnipiac’s three campuses. These include upgrades to the men’s and women’s varsity athletic locker rooms and renovations to the Rocky Top Student Center to create a bar, according to Riley.

The university paid Centerbrook $2.78 million in the fiscal year ending in 2018, according to the most recent 990 form available. John Morgan, vice president for public relations, said Centerbrook was working on renovations to CCE, Buckman, Tator Hall, the Black Box Theatre and the North Haven research lab.

It also worked on the field hockey and soccer and lacrosse stadiums, as well as scoping for new residence halls, Morgan said.

At the same time, other firms besides Centerbrook and Ayer Saint Gross are also working to design the future of the campuses.

Amenta Emma Architects in Stamford and Hartford, Connecticut, and Apicella and Bunton in New Haven, Connecticut, are two other firms employed by Quinnipiac.

Filardi said the master plan being drafted by Ayer Saint Gross should be completed by May 2020. He said this master plan will be open for change.

“Though it’s kind of a roadmap to the future, it should be flexible enough that there’s different ways to get to the same spot,” Filardi said.