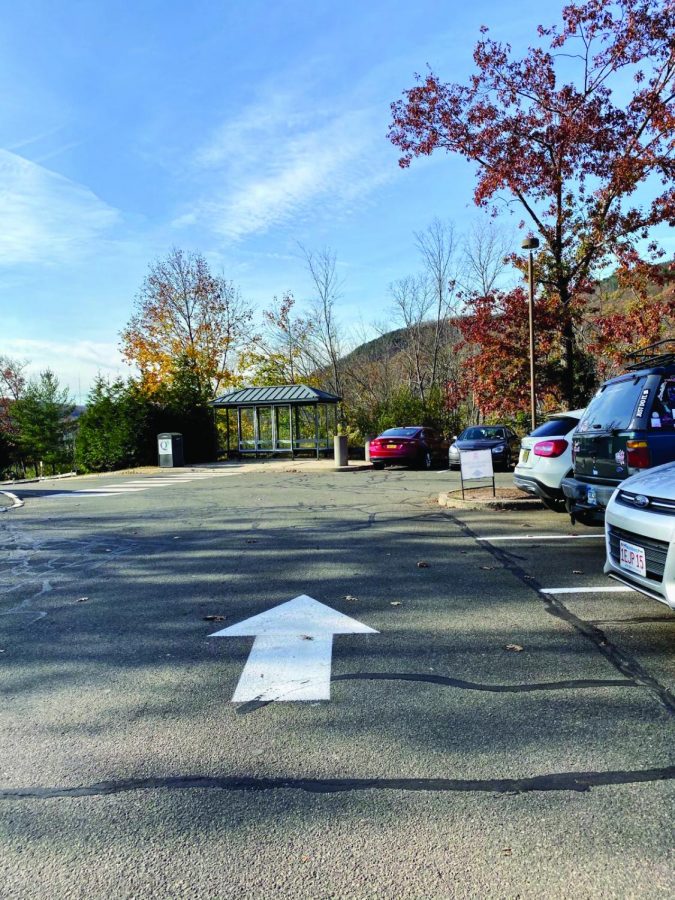 Quinnipiac needs to put the only stop sign in a better place than just at the exit of Hogan Lot.

Quinnipiac University, the university of the future. While we watch renovations to three of our residential areas, a reinvention of our health center and the construction of a pub on York Hill, it’s not hard to begin asking ourselves what’s next?

The answer is just as simple, or at least it should be: renovate Hogan Road and Hogan Lot.

As a student whose most convenient parking location is Hogan Lot, I have noticed a thing or two that stands for improvement.

The first issue with traveling to and from Hogan Lot is visibility. Hogan Road has lights on just one side of the street, and not all of them are functional. Those that are working are quite dim, necessitating the use of high beams driving down the road. This already poses a risk to other drivers though, for if someone is passing you, you run the risk of blinding them.

As an area in which multiple students loiter around either before or after a night out at clubs in New Haven, you would expect this area to be well lit to ensure the safety of both the driver and the students on the side of the road.

Because we are located in such a nature-filled area, I have also twice encountered a family of deer crossing Hogan Road as I was returning to school, and the first time I nearly didn’t see them due to how dark it was.

If you think that’s the most dangerous part about traveling to Hogan Lot, you have another thing coming.

The quality of Hogan Road, especially on the right-hand side when traveling towards Hogan Lot, is unacceptable. At a certain point, the concrete has seemingly disintegrated into a pile of debris. As a driver, this naturally makes you want to shift over towards the left side of the road more, which would be fine if there were enough room.

With no sidewalk leading to our field hockey and soccer fields, parents visiting to watch their kids play on the weekends awkwardly shimmy down Hogan Road in single-file lines to avoid impeding traffic. A newly renovated Hogan Road could certainly include a better pathway to the fields that doesn’t involve off-roading it or taking a chance that college students will have enough patience to wait for your party of 10 to make it to the field hockey game.

Hogan Lot is also home to our Uber drop-offs. During busy weekends, it’s difficult to get to the lot when there are crowds of students examining your license plate hoping you are the chariot they await while also zigzagging around the double-parked Ubers who are patiently waiting for their patrons as their late fee begins to set in.

If you are already in Hogan Lot trying to leave during a busy party weekend, all I can say is good luck. The way that the lot is designed, there is just one way in and one way out. When you park down one of its rows and proceed to exit, you are turning back onto the same part of the road other cars are using to enter. This means, at times, you are turning into oncoming traffic.

That’s alright though, certainly someone or something will direct you, right? Wrong.

Hogan Lot has just one stop sign, and it’s located at the exit. That doesn’t do you much good when you’re trying to leave the row you’re parked in and can’t see around the corner of it if anyone else is coming before you make your turn.

But wait, students know to slow down in the lot, right? Or at least they’ll be trained to when they drive over those abnormally large speed bumps we’re so accustomed to on campus. Well, not quite. We have those in Hogan Lot, but also only at the entrance and exit. It almost feels like someone started designing the lot and then sort of just gave up halfway through and the school just opened it anyway. Talk about safety first.

Speaking of safety, with our new initiatives on campus to make the area better protected, Hogan Lot seemingly negates that progress. While the Q card tap in system for the York Hill garage is a very nice addition, the only thing stopping someone from driving down Hogan Road, parking in Hogan Lot and walking right onto campus is a chain link wire that stands about two feet tall.

In addition, I have found that most nights when I return to campus, I don’t interact with any public safety officers. In fact, I have been asked to show my ID a grand total of one time the entire semester when walking from Hogan Lot.

I am not pointing out all of the flaws with Hogan Road and Hogan Lot to complain about them, but rather to shed light on the subject (and with any luck, on the road itself) in hopes that something can be done about it. If we really want to move forward and become the university of the future, let’s solve some of these easy problems that impact students every day. Improving Hogan Lot and Hogan Road can propel us in the right direction.