You can eat a sandwich without being insensitive 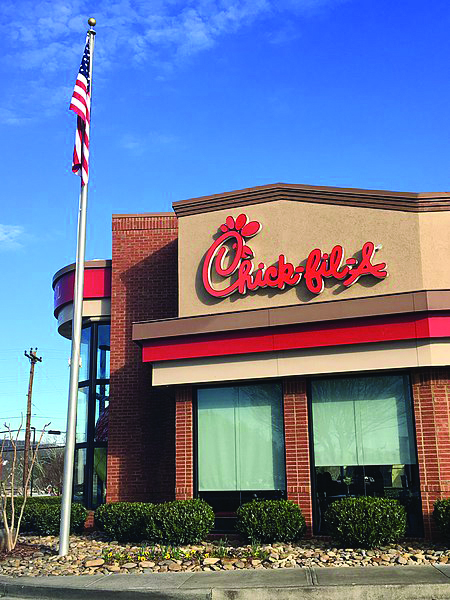 Sororities and other student organizations have invited Chick-fil-A to campus for fundraisers.

Who would have thought a chicken sandwich could be so controversial?

Quinnipiac journalism professor Margarita Diaz tweeted an impassioned message about a Chick-fil-A food truck that was on campus Oct. 28. She claimed that due to Chick-fil-A’s outspoken stance in favor of the traditional family model of husband and wife, Quinnipiac was endorsing the same values that Chick-fil-A supports.

“Why does @QuinnipiacU continue to welcome @ChickfilA to campus?” Diaz tweeted.“This company’s ownership has zealously embraced a homophobic stance. We can do better.”

As a result of Diaz’s tweet, the university issued a statement.

“We expect all vendors to uphold our commitment to equity and inclusion,” the spokesman said. “Our community will continue to engage in thoughtful dialogue on broad issues related to diversity and inclusion.”

Diaz said she believes having Chick-fil-A on campus means that Quinnipiac does not support the LGBTQ community in the way it should.

“I believe that the presence of Chick-fil-A on campus sends the message that QU tacitly condones the position of Chick-fil-A’s owners regarding LGBTQ people,” Diaz said.

I can’t help but firmly disagree.

According to John Morgan, associate vice president for public relations, the truck was here for a fundraiser.

“A university sorority invited Chick-fil-A onto campus on Monday as part of a fundraiser for a local shelter that supports victims of domestic violence,” Morgan said.

As Morgan said, the truck was invited here. Chick-fil-A chose to help out; it did not need to do so. More importantly, the students clearly wanted Chick-fil-A on campus. The students chose Chick-fil-A to represent a cause, domestic violence, that is important to this group.

“The university will schedule conversations to better understand and discuss the student, staff, and faculty concerns related to using Chick-fil-A as a vendor,” Morgan said in a prepared statement to the CT Post.

A closed meeting was also held on Monday, Nov. 4. regarding inclusivity and diversity on campus. President Judy Olian stood by Diaz and welcomed her opinion, though Diaz did feel like Olian did not go far enough.

“President Olian may have missed an opportunity to talk about the need for different culture at our institution and ultimately this is not about Chick-fil-A or any other vendor,” Diaz said. “It’s about what the university stands for.”

Don Sawyer, vice president for equity and inclusion, did say that a meeting about the Chick-fil-A food truck debate would take place next week.

From my perspective, having Chick-fil-A on campus in no way supports the values that it has. This is the equivalent to having a FootLocker sell Adidas products and saying FootLocker endorses sweatshops. It just wants to offer a good experience to its customers.

Ordering a Chick-fil-A shake with some waffle fries does not make you a bad person. It simply makes you hungry.

Diaz does believe that people who buy the product without knowing Chick-fil-A’s beliefs are unintentionally backing them.

“I think that if you are a customer somewhere, and you are using your money to support that company and you don’t take the trouble to figure out where that money goes, then in some ways you are inadvertently supporting those values,” Diaz said.

Chick-fil-A did not respond to this situation at Quinnipiac, but it did respond to anti-LGBTQ reports back in March. The reports claimed that the company gave almost $2 million to organizations that support the biblical definition of a family.

“To suggest that our efforts in supporting these organizations was focused on suppressing a group of people is misleading and inaccurate,” a Chick-fil-A statement read. “It is well-known that our founder S. Truett Cathy used biblical principles to guide our business in its formative stages, and that we still uphold those same principles today.”

Chick-fil-A does not refuse service to members of the LGBTQ community. It is widely acknowledged that Chick-fil-A workers are cheerful and respectful to everybody who enters their stores. According to a study done by QSR Magazine in 2016, Chick-fil-A was graded as the most polite fast food chain in the country.

Chick-fil-A does not actively discriminate against the LGBTQ community. It may preach the traditional family unit and support Christian values, but the restaurant does not turn away gay or lesbian customers. Diaz does acknowledge this and stated that she was talking about the owners of Chick-fil-A that have a foundation and the foundation funds of those organizations.

“This is not about me telling Chick-fil-A what they can believe in,” Diaz said. “This is about me objecting to my university bringing them here because of the values that we say we espouse as an institution which contradict their values.”

Diaz worries about how the presence of Chick-fil-A conflicts the universities’ policies regarding inclusivity. I do not believe this to be the case. The university is more than capable of keeping their own policies separate from Chick-fil-A’s. Their presence here allows students to have an extra dining option.

The university hosts food trucks all the time. Having Chick-fil-A be one of them should be no different. People don’t get an anti-LGBTQ pamphlet with every sandwich.

I am not even here to defend Chick-fil-A’s core values, but I am here to defend its right to believe in its values. Having the chain on campus for a day in a food truck does not compromise the principles Quinnipiac gives its students.

According to a statement Diaz gave to the New Haven Register, she does not agree.

“What if Chick-fil-A were giving money to racist organizations? Or the Klan?” Diaz asked. “Would we look the other way and invite them to campus? What makes discrimination against LGBTQ folks so different?”

I can answer those questions.

According to recently released tax filings analyzed by ThinkProgress in 2017, Chick-fil-A donated about $1.6 million to the Fellowship of Christian Athletes, a known anti-LGBTQ organization.

I do not condone this. Supporting a group that has not come around to a modern way of thinking is not something I can get behind. The LGBTQ community has fought an uphill battle to achieve equal rights when it comes to modern day discrimination, like simple marriage rights.

But at the end of the day, these are ideas people believe in. Chick-fil-A has the right to believe in its own ideas. The company is not going out of its way to harm or hurt other people. The Fellowship of Christian Athletes recently held a group prayer over the rising homicide rate in Baltimore. The Ku Klux Klan has killed people and stoked racial tensions throughout history as recent as Charlottesville in 2017 during the multi-day, white supremacist rally. Putting Chick-fil-A and the Ku Klux Klan in the same sentence is ridiculous.

The Klan tortures and murders any one who does not fit their version of what a person should be. There still is not a confirmed number on the amount of people the Klan has killed.

This is not even comparable to a group that preaches Christian values.

I am well aware that the LGBTQ community has faced its fair share of discrimination. As of 2018, only 20 states and the District of Columbia have anti-bullying laws that are meant for LGBTQ students, according to The Williams Institute. But preventing people from enjoying a product because some people differ in opinion goes against the freedom that embodies the American belief system.

Freedom of expression is important. Just because people disagree does not mean that one side is right, and one side is wrong. It is perfectly normal and expected to have differing opinions.

This is not even the case here. Chick-fil-A came to Quinnipiac to sell sandwiches for a fundraiser against domestic violence. It did not come here to preach Christian values and spew anti-LGBTQ rhetoric.

Despite all of this, I recognize that some people feel very strongly about Chick-fil-A. Not everyone wants to eat at this chain because they believe it associates them with an anti-LGBTQ sentiment. I do not believe this to be the case, but I understand their thought process.

Boycott then. Don’t eat at the truck.

While Diaz clearly said to me that she was “not advocating for a boycott or anything like that,” it remains an option. It does not need to be a nationwide movement, but if an individual does not want to give their money to Chick-fil-A, no one is forcing them to do so. Diaz was not compelled to eat their food and instead took the alternative route to voice her opinion.

“When my university invites (Chick-fil-A) to campus, it’s saying, ‘Come on. Sell your product. We don’t care who you are. We don’t care what you stand for,” Diaz said. “I care. That is why I stood up.”

There is a clear and very simple solution in my eyes. If you disagree with the company enough to protest it or disapprove of it, do not eat there. Preventing other people from welcoming the truck onto campus because you do not agree with the owner’s values seems unfair to the students that do not share your mindset or value the product.

So, sit down and have a sandwich. Or don’t. Either way, there’s nothing wrong with having Chick-fil-A on campus.