He is the best choice for Hamden and Quinnipiac 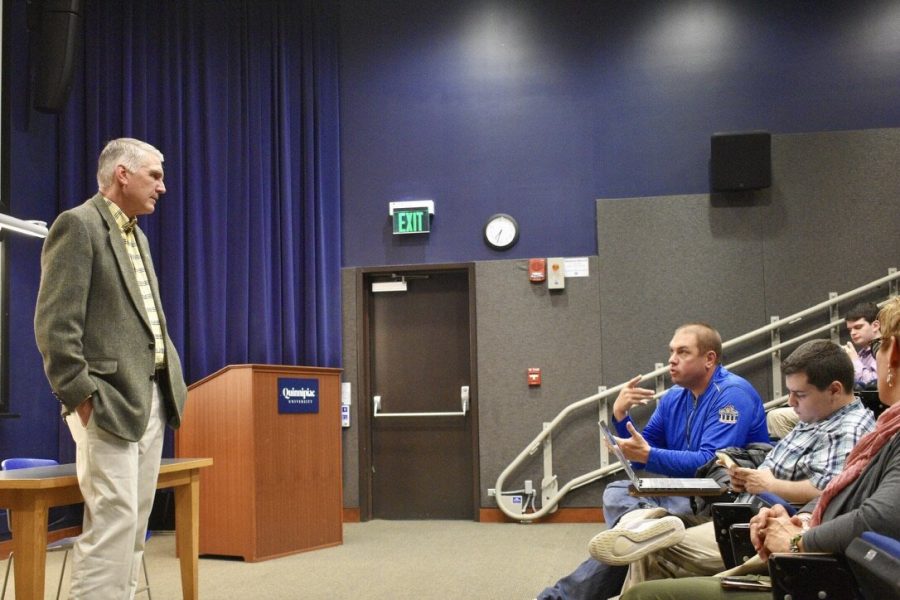 The Quinnipiac Republicans invited Jay Kaye to campus on Oct. 30, as an opportunity for students to ask him questions.

As surprising as it may be, the election that has the most relevance in your day-to-day life is one you probably haven’t heard of. On Tuesday, Nov. 5, municipal elections all across the country will take place. Those elections will determine your mayors, town council members, sheriffs and town clerks among many others.

These people are the ones who, out of all elected officials, have the most impact on your life. Neither President Donald Trump nor Connecticut Governor Ned Lamont are the ones that set the agenda for the town of Hamden. They are as they are, and this election will not change that. What it can change is how Hamden is run.

And Hamden needs change. A study by the Reason Foundation and the Yankee Institute (full disclosure, I worked as an intern at the Yankee Institute last summer) found that Hamden faced the greatest financial challenge of all municipalities in the state of Connecticut. We rank even lower than Hartford, which had to be bailed out by the state in recent memory.

According to the town’s 2016 financial report, Hamden faces a long-term debt liability of $784.1 million. Unfunded pension liabilities make up the largest part of that amount, at just over one-third of the total. In other words, the problem is structural. So while it’s true that the state as a whole is going through hard times, that is not the reason for Hamden’s woes.

This problem is one that precedes Hamden Mayor Curt Leng’s term, but it is not one he has taken the right approach thus far to solving. His solutions mirror the ones taken by the state of Connecticut at large: tax increases. Hamden has the highest mill rate in the state. Property taxes have been raised twice in the last four years. And on top of that, Leng has proposed an out-of-state car tax program. Meaning, if you are a Quinnipiac student from out of state and you have a car, you would be paying at least $500 to the town per year for it, according to Q30 news.

Mayoral candidate Jay Kaye understands that Hamden cannot tax itself out of a structural spending program. As the owner of a small business, he understands the conditions that are needed for economic success. He has been successful at it for the last 30 years. Running as a Republican in a town as heavily Democratic as Hamden against an incumbent mayor seems like a suicide mission. As of April 2019, Hamden had more registered Democrats than independents and Republicans combined.

As uphill a challenge it may be, it’s one that needs to be done, and Kaye is the right candidate to do it. He came to Quinnipiac and made himself available to students twice. He’s talked often about repairing the frayed bonds between the Quinnipiac community and the town and is prepared to do it. He will not tax your cars or increase the financial burden on Hamden residents.

Hamden is being poorly run and has been the last two decades. It’s sad but true. And one reason for that is the town has essentially functioned as a one-party system for that time. Republicans hold two seats on the 15-person town council and have not held the mayor’s office since 1999. Real change requires a change in leadership. The person who can bring change and leadership to Hamden is Kaye, and that is why he deserves your vote on Tuesday.