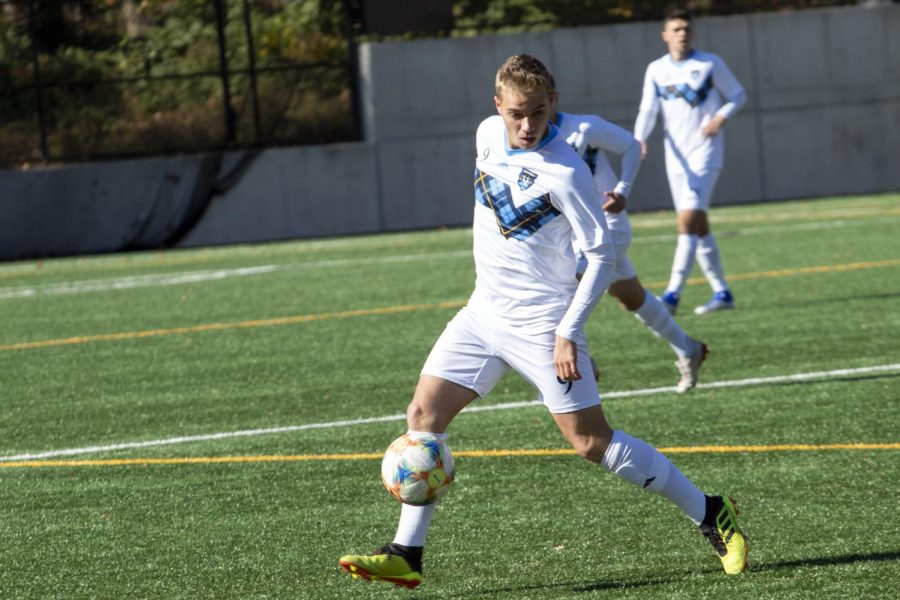 Quinnipiac men’s soccer head coach Eric Da Costa talked about the seniors on the team, and how he has seen them change the soccer program.

“They have been instrumental with us as they continue to elevate the standard of our program,” Da Costa said. “They came into a program that has high standards, and they came in as freshman and won the regular season championship, but we unfortunately lost in the finals. That bar was set very high for them, as well as having the pressure of having to maintain that bar. Credit to them for their four-year career.”

Bobcat senior Eamon Whelan reflected on his career, talking about how grateful they were to see past players and family members come to a game that means so much to them.

“It’s awesome,” Whelan said. “Rashawn (Dally) was saying that he drove 12 hours and got back three hours ago just to come. It just shows the culture and the whole program. It’s awesome to have those players come back and support us like they did.”

The Bobcats opened the brisk game hot, as the Stags committed their first foul 90 seconds into the game. Freshman forward Brage Aasen attempted to take advantage of the free kick but just missed with the ball curving to the left of the net.

The Bobcats followed this up with another free kick, this time by senior midfielder Romain Daniellou, as this attempt was blocked by a Stags defender.

From this point on, the game started to become a defensive-minded battle, as both teams applied pressure to cause turnovers.

With under 10 minutes left in the first half, the Bobcats scored the first goal of the game. Aasen attempted a corner kick that was headed back into the middle of the field. That is when Daniellou retrieved the ball and fired a pass to Whelan who was able to head the ball into the goal to give himself his ninth goal of the season, as well as the Bobcats a 1-0 lead heading into halftime.

Whelan described what happened in the moment when he scored, saying that this was not the plan but rather he was in the right spot at the right time.

“I don’t think there was a game plan drawn up for how I scored,” Whelan said. “I think it was the right-place, right-time mentality.”

Within the past week, Whelan has scored four goals, with a hat-trick Wednesday, Oct. 30, against the Siena Saints and one goal coming in today’s game.

Da Costa talked about Whelan’s amazing streak, and how he is the kind of player that you can rely on when you need him the most.

“Eamon is Eamon,” Da Costa said. “He is a big player who shows up to big games and today was a big game and certainly having to get a hat-trick is amazing. We were comfortable and then things were tough again and we are always looking for the next man to step up and Whelan always steps up and finds that next goal.

Heading into halftime, the Bobcats were tied with the Stags with three shots on goal a piece, three saves and seven fouls. Meanwhile, the Stags had two saves and 10 fouls.

Entering the second half, the Bobcats put four shots on goal and almost got a goal from Whelan with 25 minutes left in the half. This was set up by a sharp pass from senior midfielder Evan Hughes, only to have the ball miss left of the net.

On the defensive side, the Bobcats were playing aggressive defense at the beginning of the second half, as they only allowed the Stags to take one shot on goal for the whole second half.

For the Stags, they looked like they were struggling the whole second period. They were getting shots off but could not convert on the opportunities given to them.

The Bobcats look to continue their two-game win streak, as they play into the final game of the regular season as they take on the Rider Broncs on Wednesday, Nov. 6, at 4 p.m. at Ben Cohen Field.