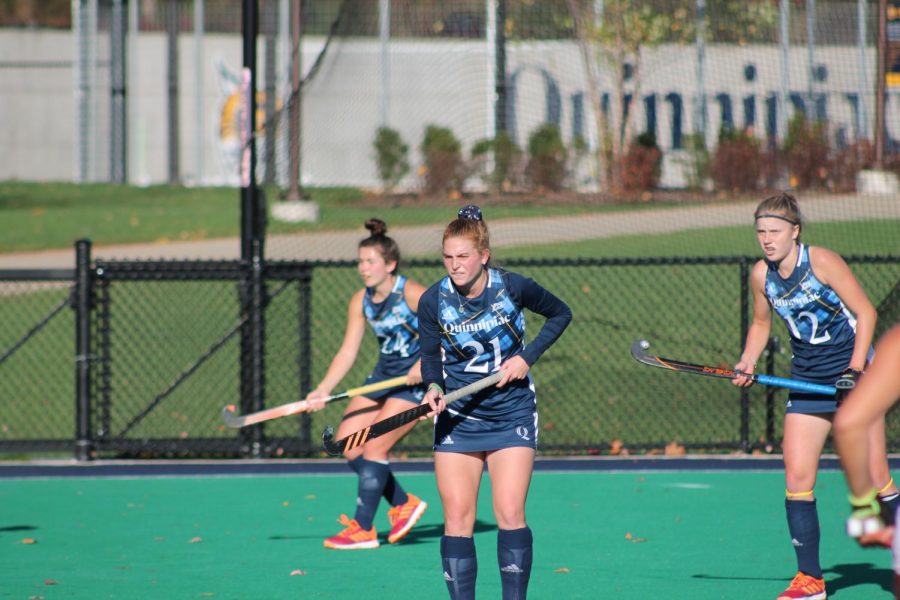 The Quinnipiac field hockey team took on the Temple Owls in its 2019 season finale. The Bobcats finished the game with a 3-2 win in double-overtime.

“This was hard-fought, gutsy,” Quinnipiac head coach Becca Main said. “It was actually the most enjoyable game of the year in terms of outcomes. We had players doing what we’ve been asking them to do all year and to see a couple of really gutsy performances by Julianna (Capello) and then Bianka (Strubbe) in terms of finishing when you need to finish, that’s huge.”

Temple took a 1-0 lead within the first few minutes of play. Senior midfielder Becky Gerhart managed to sneak one past the Quinnipiac’s freshman goalkeeper Mack Vorel on a penalty corner.

After the early Temple goal, the match bounced back and forth, as each team struggled to score.

It was late in the second quarter when Quinnipiac’s freshman forward Julianna Cappello nailed one into the back of the net to even the score to 1-1.

Temple’s freshman forward Sydney Beck nearly put the Owls back ahead with a close shot on goal in the final minute in the second quarter, but Vorel made the save. Vorel ended the game with four saves.

The score would remain 1-1 going into halftime. Both Quinnipiac and Temple had six shots, three of them on goal for both teams, throughout the first two quarters.

Both teams came out flying in the third quarter, battling back and forth for the lead. Quinnipiac’s sophomore defender Jess Halley came close to putting the Bobcats up with a shot that Temple was just able to block.

By the end of the third quarter, neither team was able to pull ahead.

Quinnipiac controlled most of the offensive game in the fourth quarter. The Bobcats had a series of three penalty corners in a row but were unable to convert.

In the last two minutes of the fourth quarter, Temple’s sophomore midfielder Claire Thomas scored to make the lead 2-1. The goal came off a counter-attack on a Quinnipiac penalty corner.

Less than a minute later, graduate student midfielder Bianka Strubbe fired one into the back of the net to bring the score to a tie once again at 2-2. The goal came off Perkins’ penalty corner and marked Strubbe’s ninth goal of the season.

The score remained 2-2 until the end of regulation. During the first overtime period, Quinnipiac and Temple were neck and neck trying to take the lead. Temple tallied four shots but was unable to capitalize on them.

In the second overtime period, Quinnipiac came out flying with two early shots that missed just wide of the goal. In the 74th minute, Cappello scored her second goal on the day and the game-winning goal for the Bobcats.

“That’s the best part of the game, when you’re relieved that you won and your teammates come out and support you,” Cappello said.

Quinnipiac finished the season 5-13 overall and 2-5 in Big East play.