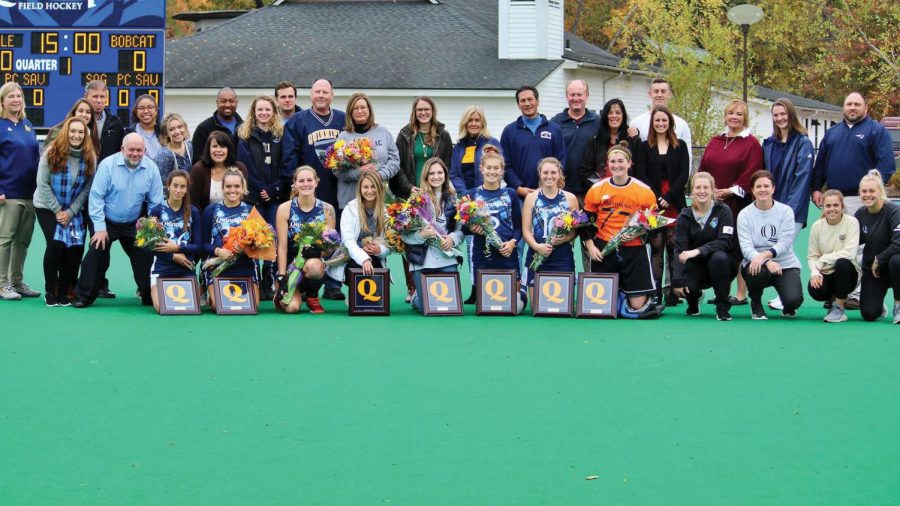 Field hockey celebrates senior day by giving plaques to those who will graduate before its next season.

“Over this weekend was probably the first time I thought about what life will be without them. And that was something that I’m not interested in even thinking about yet.”

Now that there’s a few days left until the  2020 class plays its last game at Quinnipiac, Main reflected on the memories she made with the group.

“I was forced, I guess, to think about it last weekend to this weekend because it was our Senior Day on Sunday,” Main said. “And even when I’m writing the speeches — I read a speech for each of them. I write them and then the day comes, and I’m trying to be all serious and focused. And then the speech has started, and the feelings go.”

“I would say it was the hardest four years of any athletes that they’ve had to go through in terms of shifting from a conference,” Main said. “They would have dominated (the MAAC) for four years and been in a completely different situations than they are now.”

This group is also a part of the team that first played on the brand-new AstroTurf at the Quinnipiac Field Hockey Stadium. Previously, the team shared the Quinnipiac Rugby Field with both soccer and lacrosse teams, the field for intramural sports and the Quinnipiac Soccer & Lacrosse Stadium.

Main has a coaster in her office with a picture of the 2017 team walking on the turf for the first time.

And on that turf is where so many memories were made.

“I think my favorite moments are when I’m able to spend so much time at practice,” Blum said. “And then finally it leads up to a big events where I can either score, or I have a moment that’s just like, everything you put into it is glorified in that one moment.”

It’s more than just on-field moments that made the team diverse. It’s the character and leadership development from the players, even if they didn’t see a lot of playing time.

Strubbe has dominated the offensive side of the ball. The graduate student is in her second year with the program and leads the team in goals (8) and points (19) this season — both totals are the most since Savanna Reilly had nine goals and 22 points in 2016 as a graduate student forward.

The team looks up to Strubbe on and off the field. She referred to herself as a sophomore, yet her teammates and Main call her the “mom” and “grandma” of the team.

“This year she’s found this really pleasant place where she can be hard-hitting, going after it, supporting her teammates and also bring them along” Main said. “I think they appreciate her more.

“We had a big conversation a couple weeks ago because we weren’t communicating on the field, and it was like, ‘Well, who do you want to do all the communicating?’ And everyone was like, ‘Bianka.’ Where last year, they had a hard time like, ‘I don’t know. She’s kind of abrasive. She yells at me.’ This year, it’s like, ‘Tell me what to do. Tell me what to do now.’”

Strubbe, despite viewing herself as a sophomore, sees that the underclassmen look up to her because of her experience.

Prior to Quinnipiac, she played for Poland’s Junior National Team from 2009 to 2015. She moved up to Poland’s Senior National Team in 2015 and still plays to this day. She also won the Polish Championship six times and placed second five times.

Her experience has bolstered the Quinnipiac program and put her in the position to lead the Bobcats.

“Bianka is the most highly-skilled, world-class athlete I’ve ever had,” Main said. “She is a lead-by-example, but she also is tough and pushing the people that are around her.”

Unlike Strubbe, Perkins gets her word across in a quiet manner, according to Main. Nevertheless her voice is heard loud and clear.

“I try to lead by example,” Perkins said. “Whether we’re just going to get water, I always try and run off the field, be the first person out. I just want people to give it their all every practice. I try to give everyone the motivation to want to be here every day and to try to show them that you have a great opportunity to play every day.”

Since senior year of high school, Perkins has mentored freshman forward Julianna Cappello. The two went to Lakeland High School together when Perkins was a senior and Cappello was a freshman. Cappello was called up to the varsity team for the postseason and got the opportunity to play alongside with Perkins.

“I saw the potential that she had when she was that young,” Perkins said. “I definitely wanted to take her under my wing.”

Martinez traded Madrid, Spain, for Hamden, Connecticut, and joined the Bobcats in 2016, one year after her sister, Elisa Ruiz Martinez, did. For three years, Elisa and Inès shared the midfield.

Main and Elisa saw Inès’ potential before Inès was a freshman at Quinnipiac.

“We’ve liked Inès from the beginning,” Main said. “Inès came to a clinic on a wet, rainy day and she did a whole bunch of little things. Elisa kept on saying, ‘She’s better than I am.’”

This past spring season was the first time since her senior year of high school that Martinez didn’t have her sister with her.

“They really needed to rely on each other and Inès can be stubborn and difficult and tough, and she didn’t realize how much she needed her,” Main said. “So, on Sunday, she even said, ‘I cannot believe how much I value those three years I just had with you. I took them for granted because as soon as you were gone, I needed you.’”

Even without her sister, Martinez has dazzled in her senior season. A season after being named NCAA Statistical Champion with nine defensive saves, Martinez is leading the Bobcats with six assists and three defensive saves.

Blum has also showcased spectacular play over her four years. She tallied career highs with five goals and three assists during her junior season. Her senior season is less statistically appealing, but it featured her best game ever, according to Main.

“She did have a little lull in September, and she spent the last two weeks really hard working that out,” Main said. “Then I saw Friday night’s game at Providence was the best game I’ve ever seen her play in her entire life.”

Blum scored her first goal of the season against Providence in her standout game. That said, her play on the field isn’t the most noteworthy thing about her.

Last season, she won The Bobcat Award, which is awarded, “to a player that exemplifies the principles of being a good teammate,” according to Quinnipiac Athletics.

“Amanda is just the most selfless person,” Perkins said. “Even if she’s struggling, she will be the first person to go over to somebody and help them, even if she might not feel that she has the energy to do that … Amanda is always there if you need her.”

In order for Blum, Martinez, Perkins and Strubbe to stand out, they needed people to do the “grunt work.” Denion and Jannell played that role.

Jannell, who transferred from LIU Brooklyn in January 2019, hasn’t seen any time in the 2019 fall season. Still, she’s at the forefront of the senior class and has set an example for the underclassmen.

“Molly gets dressed like, I mean you can tell that kid’s had her pads on for four years in college and for three or four years before that,” Main said. “She’s the first one out, and she’s always the first one there. Even today, she was the last one off the field.”

Denion, like Jannell, is someone who pushes her teammates every day and is an integral part of the team despite not playing much.

Main understands that teams cannot play all 25 players, but she values each player because of what they all bring to the table.

Without Denion and Jannell, Main believes the team is without those who can analyze the game and motivate the players while the team fights on the field.

“There have to be people like Molly and people like Sarah who are pushing no matter what, showing you an example,” Main said. “That’s who you want to work with in a corporation or higher ed or in any kind of situation.

“You want people that maybe aren’t getting the star and putting on the presentations, but they’re the one that did all the grunt work. That’s a Molly, and that’s a Sarah. So, if you don’t have that, then it’s really impossible for the team to shine without them.”

The diversity of on-field success, personality and being the first core to play four years in the Big East is why this senior class is extraordinary.

Next season will be different. Lots of familiar faces will return, but the leadership roles will be in the hands of the rising upperclassmen. The game against Temple on Friday, Nov. 1, will be the last opportunity to see the senior class play on the AstroTurf as Bobcats.

“It’s easy to go, ‘I’m going to miss what she does this on the field,’” Main said. “‘When Molly makes a save, I miss this. I miss when Bianka takes a corner shot. I miss when Val dribbles through three people.’

“But I think the thing you usually don’t really realize you miss until February when you start with a new team without them is the character and the personalities. But this group, I absolutely know that’s something I miss already more than anything else that they do on the field.”