Is the truth dead?

The CEO of Fortune magazine says his lecture at Quinnipiac, ‘The Death of Truth,’ is another flashy headline 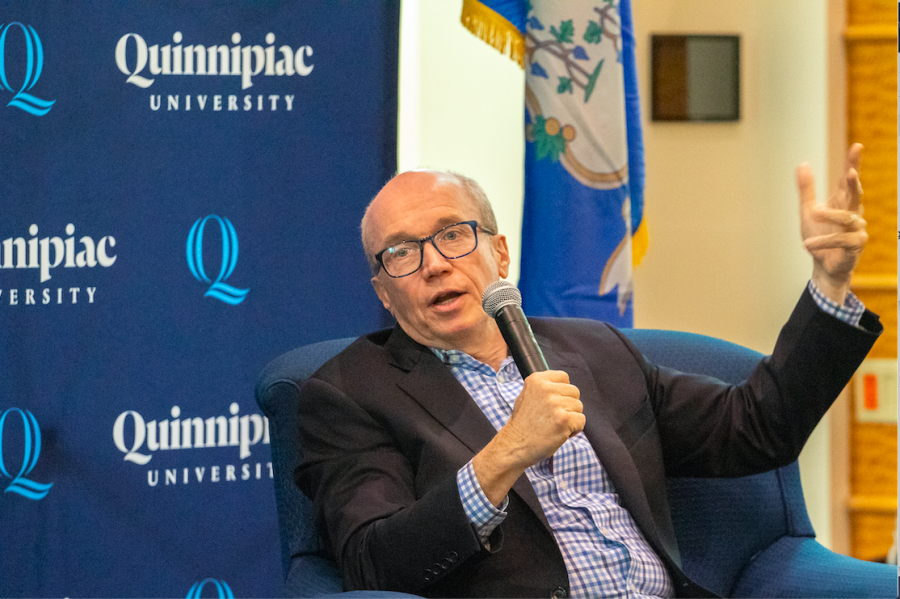 CEO of Fortune Magazine spoke to students about the death of truth.

CEO of Fortune magazine Alan Murray spoke to Quinnipiac students, faculty and staff on Oct. 25, about the assault on facts in the 21st century, but he said the truth isn’t dead just yet.

Murray’s lecture, titled, “The Death of Truth,” was a hyperbole, according to Murray. He said the truth still has a chance to come back to life.

Some of these people filled the Mount Carmel Auditorium on  Friday afternoon to listen to Murray speak about his lengthy career spanning the Wall Street Journal, CNBC and Fortune.

“His lecture made me consider truth differently in the context of the news, and how the rules of the game changed as technology developed,” Kelly Reynolds, a senior political science major, said.

The journalism and media industries have changed wildly throughout Murray’s career. Just like the sensational title of his lecture, he stressed that the business model for journalism is now about gathering a larger audience.

High-quality coverage is more important now than ever, Murray said. He warned that facts are under attack, which is an issue that transcends the election of President Trump.

“Yes, (Trump) has a peculiar attitude toward facts, but I think the problem we have as a society predated his election and will continue long after he is gone,” Murray said.

Reynolds said she respected how Murray didn’t talk about political controversy and instead stuck to how the political climate is affecting facts.

“I really appreciated how he began and immediately took politics out of the equation when he was discussing truth,” Reynolds said.

Chris Roush, dean of the School of Communications, said Murray has a track record of commitment to quality amidst changes in the industry, and that this is something aspiring communications students can learn from.

“Alan has done such a wide variety of things in journalism,” Roush said. “From helping the Wall Street Journal launch its website, to running the Pew Research Center, to helping to sell Fortune to (billionaire Chatchaval Jiravanon) — he’s really at the forefront of what the media companies need to be doing these days.”

Murray said the Fortune’s website is moving to enact a paywall, which would force readers to subscribe for certain content. Murray said this is something that media companies should have enacted in the mid-1990s before readers became accustomed to free online content.

Members of the audience pressed Murray about how this additional barrier to factual information would negatively impact the average reader, forcing them to turn to social media for free, but not always factual news.

“We’re not talking about huge amounts of money,” Murray said. “Most people spend more money on their coffee every day than we will be asking them to spend on any of their news organizations.”

In an era when media companies are turning to billionaires, ad dollars and paywalls to fund them, and “fake news” is a household phrase, journalists find themselves in a quandary Murray said.

“This is one of the hardest parts of the change because it’s consumer choice,” Murray said. “People are getting the news that they want and you can’t really fault the news organizations for giving them what they want.”

Roush asked Murray how he could get his 79-year-old mother to stop reading Facebook for her news.

Murray said that in order to survive as a society, “We will need to get beyond that” and educate people about what is factual and what is not.

Kerry Deasy, a freshman English major, said the accessibility of sources like Facebook makes the jobs of professional journalists challenging.

“It’s even more difficult now as real journalists have to work even harder to compensate for the availability and the appeal of the news that comes so freely from sources like Facebook or other social media even though it may not be as accurate as it should be,” Deasy said.

Murray believes it is possible to move past this era of assaulting facts because of the promising conversations he has had with young aspiring journalists.

“The first step toward solving the problem is recognizing we have a problem,” Murray said. “And if young people are at the forefront of that movement, that’s great.”

“As long as there are journalists and consumers who value truth it will remain in society regardless of the fact that there will also be lies intertwined with the truth,” Reynolds said.