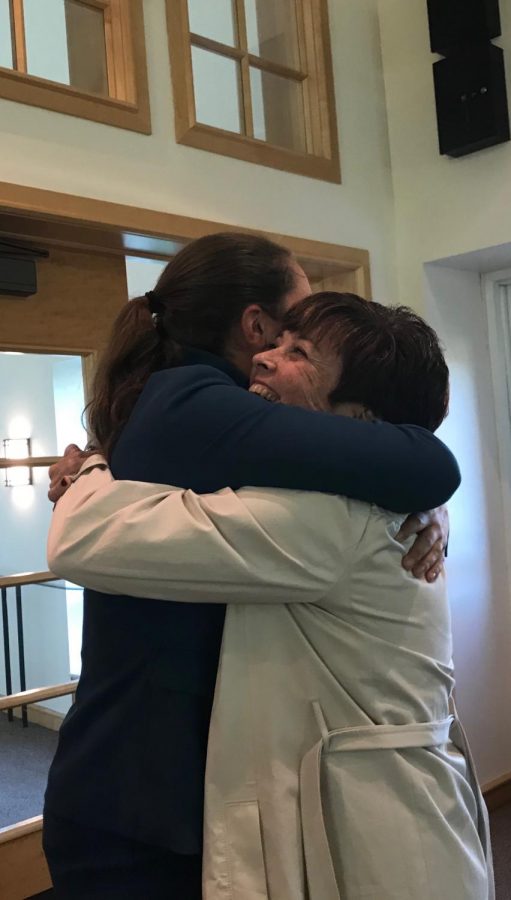 The Quinnipiac Student Government Association (SGA) has passed and implemented a wide range of high-profile initiatives.

Among these plans are free laundry for all on-campus students starting in the fall of 2020, open parking for juniors and seniors and an open forum town hall with President Judy Olian.

“I think with President Lahey there was a little bit of a struggle of how to get student input,” Calvo said. “They weren’t really interested in what students had to say a lot of the time.”

Calvo compared the presidential transition from Lahey to Olian to a ship being steered in a new direction. He said that last year, students and SGA did not feel the difference, but now the changes are obvious.

Calvo also spoke about a book full of student concerns that he collected while he was campaigning. Olian was very receptive to the book according to Calvo and has been open to students voicing their concerns directly to the highest levels of the university.

For example, Head of the Board of Trustees William Weldon came and talked with SGA in a closed door meeting on Oct. 11, addressing student concerns.

Calvo says that he spent nearly seven hours at a Board of Trustees meeting expressing student concerns. Calvo says that previous SGA President Ryan Hicks told him that Calvo would be kicked out in about 20 minutes.

“If someone asked me a question, I was not going to hold back because I’m sitting around a table with people that are worth billions of dollars collectively,” Calvo said. “I’m going to say exactly what I think (the student body) would want me to say and not just be like, ‘Oh yeah. I think what the university’s doing, it’s fine.’”

Executive board members have all taken different approaches to their jobs this year. Calvo has worked to try and pull SGA out of years of internal reform and strife and turn instead to a platform of student advocacy and transparency.

Vice President Sophia Marshall, an advocate of the free laundry initiative since her freshman year, has transformed the vice presidency into a way to communicate with external communities such as the town of Hamden and QU Dining.

She’s currently working to increase student voter registration and helped in hosting a District 9 debate on York Hill on Tuesday, Oct. 29. She is also trying to have SGA members attend Hamden legislative meetings. All of this is an attempt to help build a relationship between students and Hamden.

“Next semester we’re hoping to have a Q&A with the mayor, so he’ll come here,” Marshall said. “Basically President Olian would ideally be there and like, it’d be some sort of Q&A with him so we could kind of voice our concerns as Quinnipiac students to him. The dialogue (between Quinnipiac and Hamden) is kind of there with administration, but not really with the students right now.”

Vice President for Student Experience Esau Greene, who has fought for public town halls with President Olian, is using his position to encourage students to hold discussions with each other. Greene is also looking to expand the Ask Away program, and encourage events that create dialogues across different communities.

“When I think of higher education, I think of people openly going out to access new information,” Greene said. “That doesn’t necessarily mean learning through textbooks. I think the greatest way to learn is to learn from one another. I think my university of the future is a cross campus effort to go out of our ways to increase our own perspective and background knowledge of what it means to be a person.”

SGA Vice President for Finance Glenn Adams has been training finance board members to help assist in reimbursements and communication to student organization leaders. Getting back reimbursements on time has been an issue for SGA in the past.

“We’re looking at just training them to do some of the things that I’ve been doing,” Adams said. “They’re working on reimbursements, they’re working on clearing the credit cards, stuff like that. The big thing I’m excited for is I’ve had them each take a handful of clubs to work with directly. It’s really helped with communication.”

SGA Vice President for Public Relations Jamien Jean-Baptiste has made meet and greets more common and pushed to make the SGA suite a welcoming place for any and all students.

“We want to portray ourselves as students and not just government officials,” Jean-Baptiste said.“I think it’s also important to maintain that professionalism. I think finding the fine line between professionalism and student advocacy and student engagement is where I want to kind of draw the line for PR and hold the members of SGA accountable.”

In an informal survey by The Chronicle with 21 respondents, 62% of respondents said they approve of the job SGA is doing and 66.7% said that this year’s SGA is as good as or better than last year’s.

Students who approved of SGA cited that free laundry, reformed parking and the people involved in SGA have made them better. Those who disapproved of SGA said that issues with reimbursements, lack of outreach and passed initiatives having little impact are reasons for concern. Some said they had not heard about what SGA had done this year.

Students with concerns can come to SGA’s weekly board meetings on Wednesdays at 4 p.m. in the Mount Carmel Auditorium.