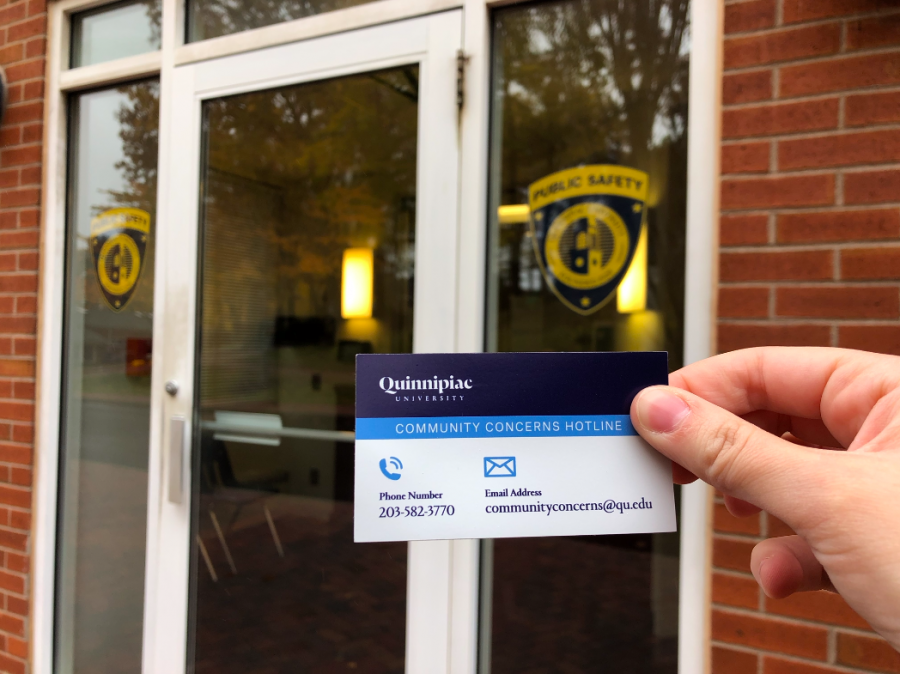 Vice President and Chief of Staff Bethany Zemba developed a task force of Quinnipiac administrators and Hamden town officials to address concerns related to students living off-campus in Hamden neighborhoods, such as noise and parking violations.

The Quinnipiac/Hamden Off-Campus Housing Task Force, which met for the first time on Oct. 3, will help to create an open line of communication between the town and the university with regards to students living in the community, according to Zemba.

Acting Hamden Police Chief John Cappiello, who is a member of the task force, agreed that the atmosphere in the room was ripe for positive change.

“Everyone was getting along, everyone was talking,” Cappiello said. “It was really professional.”

The task force includes members of the Hamden Police Department, a representative from Hamden Planning and Zoning, a Hamden tax assessor, the Hamden director of arts and culture, the Hamden council president, a Hamden building inspector and the Quinnipiac Valley Health district deputy director.

Cappiello said the police department has interacted with Quinnipiac in the past, but sitting down as a group makes communication easier.

“For a while there it was always the town against the university,” Cappiello said. “I’ve always been a big believer that we need to communicate and do it as a team effort which is what we are doing now.”

While Zemba emphasized that most student involvement in the community is positive, she said Hamden residents have expressed concerns about parking, trash and noise.

She said one of the biggest complaints is students parking in the grass instead of on the side of the road.

“Those are the issues that we can work together to fix because, again, our students want to do right by Quinnipiac and the town of Hamden and be good citizens,” Zemba said. “It might just be a process of reminding them that these are some of the things that we have heard that are concerns from the town’s perspectives.”

Members of the community can now call a hotline 24 hours a day to report a complaint regarding students living off campus, according to Zemba. The caller will be connected to a dispatcher who will help to address the complaint.

Students living off-campus also violate Hamden’s policy stating that only four students can live in one home. Zemba said many people aren’t aware of the regulation, so they aren’t following it.

Zemba said she is hoping to find a student representative and a landlord to complete the group.

Cappiello said having a student on the panel is crucial, because it will help one side understand the perspective of the other. He said that when he and Public Safety were communicating separately, a lot of people got left out.

“It’s regarding (the students’) four years there, their life,” Cappiello said. “It’s a great idea to get them involved.”

Zemba meets with Hamden Mayor Curt Leng regularly to discuss Quinnipiac’s relationship with the town and said these conversations have been productive.

“He’s fully on board with trying to work with us on these initiatives,” Zemba said. “I think he likes that we have made this part of our strategic plan — to be great neighbors, positively nurturing our surrounding communities.”

In addition to working with the town on this project, Zemba said she is collaborating with the Student Government Association (SGA).

The first is to work with the Hamden Police Department to allow students living in off-campus housing to safely park on the street without receiving a ticket.

The second is to hang banners and signs around Whitney Avenue that will have messages such as “Quinnipiac and Hamden – Better Together.” Marshall said this would promote “connectivity and spirit.”

The third goal is to create a survey to gauge the needs of students who live off-campus. Marshall said talking with commuter students in SGA has provided important insight.

“I live on York Hill right now,” Marshall said. “I don’t necessarily know the needs of a commuter student. We do have commuters on my committee, which was helpful too because they bring that really diverse perspective. On the other hand, we also are trying to figure out what we can do to better Hamden.”

Zemba said bettering Hamden is something that Quinnipiac already excels at. Part of her community outreach campaign involves keeping records of all the ways in which Quinnipiac is already involved in the community.

Zemba is working with the Office of Integrated Marketing and Communications to create community.qu.edu, which would make Quinnipiac students, faculty and staff more aware of what others on campus are doing to help those outside the campus.

“Almost every time I talk to somebody I find out something new they are doing with the community, so that’s fantastic,” Zemba said.

Zemba pointed out that the School of Communications, the Albert Schweitzer Institute and the Office of Community Service are working on food security projects in Hamden and beyond.

“Maybe we want to put together the Quinnipiac and Hamden Food and Security Task Force,” Zemba said. “There is already a group of people who are working with the community, and they are doing a great job. It’s just how do we bring that home so we are recognizing all of the different aspects and strengthening them.”