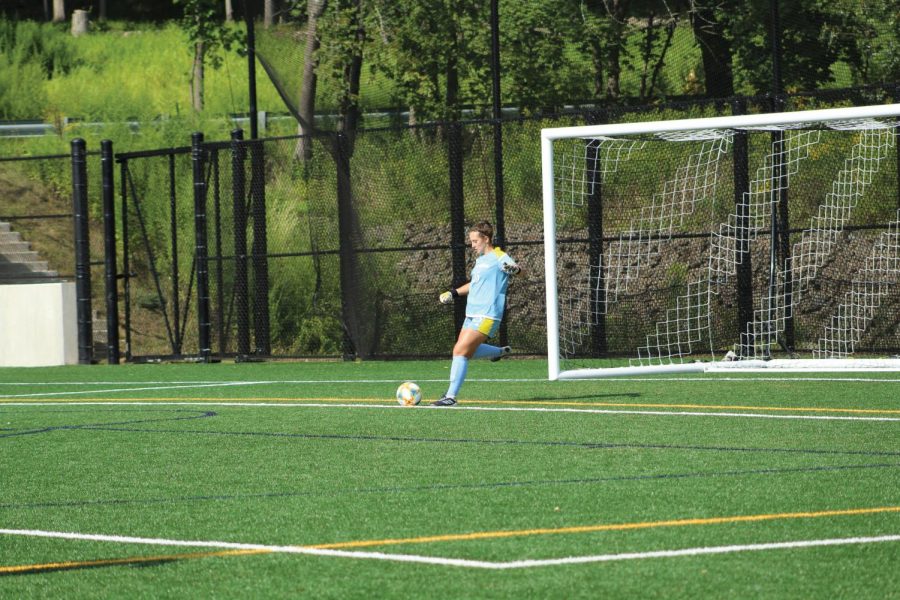 A new country. A new home. A new life.

Freshman Meaghan Phillips is experiencing plenty of change right now, but you wouldn’t be able to tell from the outside.

As the goalkeeper of the Quinnipiac women’s soccer team, Phillips has recorded five shutouts this season. In another game, she recorded 80 minutes of play without allowing a goal. Her 81.5 save percentage is the highest mark of all four goalkeepers on the team’s roster and on pace for fourth-best all-time in Quinnipiac’s history.

But behind the solid play is an 18-year-old girl who was thrown piles of responsibility in a new country.

Phillips hails from Aurora, Ontario in Canada, a whopping 556 miles from her new home in Hamden, Connecticut.

Despite the challenges that come with moving to a new country, Phillips has been cool, calm and collected on the field and off.

“It’s not that different. It’s pretty much the same, just in a different country,” Phillips said. “The only thing that’s really different about my life is I’m a student athlete, so this is like my full-time job. Being at home it’s like you’re a student, and then an athlete is just on the side.”

One reason the transition has been so seamless is because of the support system that Phillips brought with her. Her twin sister, Cassidy, joined her on the trip from Ontario to Connecticut.

“We’re really close, so it’s nice,” Phillips said. “I moved to a different country with my best friend, I’m going to school with my best friend. So it’s a lot easier, because it’s like taking home and moving it here. We live across the hall from each other so it’s kinda funny, we just knock on each others doors. It’s like I’m back home.”

Cassidy Phillips runs for Quinnipiac’s women’s cross country team in the fall. The sisters have found comfort in having one another so close in a new place, but also intend to have their own separate experiences.

Phillips has experienced plenty in her first year at Quinnipiac. In her first season in the MAAC, she’s allowing 0.67 goals per game in conference. Monmouth and Fairfield, the first and second place teams in the MAAC that average 2.4 goals per game combined, have combined to score 0.5 goals per game against Phillips, nearly two full goals fewer than their averages.

Phillips isn’t just adjusting, she’s excelling. A big reason she’s been able to play well with her new team is because the team doesn’t feel new at all. Phillips and other freshmen were immediately welcomed by the upperclassmen on the team to make adjustments as smooth as possible.

“It’s such a great group of girls, we work really well with each other,” Phillips said. “You just have to learn quickly that you have to mesh, because whether you’re a senior or a freshman coming in, you’re going to be playing with each other for that year. So, right away, right off the bat, you’re just in it with each other, and you’ve gotta pretend like you’ve known each other for years.”

Even when things do get challenging for Phillips, she handles the adversity with grace and confidence, the way any good leader would. As a freshman, Phillips is still finding her role in the locker room, but on the field and outside of soccer, she considers herself somebody people can rely on and look up to.

WSOC: HUGE save by Meaghan Phillips and a clearance by Quinnipiac pic.twitter.com/1GWg4VP3qZ

“As a person I’m very outgoing, I consider myself to be a leader,” Phillips said. “I’m a very hard-working person, and I always try — especially being the goalie — you have to talk to everybody so you have to be a leader on the field. So I always just try to think of myself as being a leader and being outgoing enough to get to know other people, because I need to make connections off the field in order for the connections to be on the field.”

The bonds she has formed with her teammates look sturdy. Whether she’s in the stands with teammates to watch a men’s soccer game or in the net barking out orders, Phillips is vocal and an active member of conversation.

Her ease in forming those connections has proven vital early on. Growing up, Phillips had always played a certain style of soccer. As a citizen of Canada, she played the same way her fellow Canadians did. The move to Quinnipiac opened Phillips’ eyes to a new style of soccer, but with the help of her teammates, she’s handled the adjustment with ease.

“It’s a lot faster. Canadian soccer and American soccer, they’re similar styles, but American soccer is a lot more aggressive and it’s really fast, especially playing at this level,” Phillips said. “I’m playing with girls who are four and five years older than me, so you just have to adapt really quickly. In practice too, we don’t cut off on each other, you’re just going at each other. You’re just working as hard as you can, so you just really quickly pick it up.”

Harvard chance here coming from the left flank, but Meaghan Phillips comes up with a big save

Not every challenge is met with perfection, though. One area Phillips has struggled in is recovering from a defeat. As a goalkeeper, there’s a sense of responsibility for a loss other teammates can’t relate to. Had the job been done perfectly, the result would be a draw at worst.

“I think the most challenging thing is just bouncing back,” Phillips said. “In practice, we work on it, but sometimes there’s just the heat of like, ‘Oh we lost.’ We came into the season and we won, and then we went on a three-game losing streak, and it was like, ‘What happened.’ We were playing so good in the end of preseason, and then all of a sudden it just hit and we weren’t winning.”

The winning returned, however, and the team surpassed last season’s win total with three games left on its schedule. Now with just one game remaining, the team hopes to make one last playoff push.

Only six teams make the playoffs in the MAAC, and the Bobcats currently sit fifth in the standings. At 4-4-1 in the conference, Quinnipiac has little wiggle room entering its final game. If the Bobcats lose, they could get pushed down to sixth in the conference and face a tougher path to the championship.

BIG TIME save from Meaghan Phillips on a Gaels' set piece ✊✊

Phillips, though, is looking forward to the challenge, just as she looks forward to all challenges in life. While there’s cause for anxiety and fear, Phillips is more optimistic than anything else.

“I’m excited,” Phillips said. “A little bit nervous, but nerves are always a good thing, it just shows that you care for the game. Just really excited though, because I know how the team’s done in the past.

“I’m excited to see what this team can do. We’ve been doing pretty good, we’re playing really well — and with a bunch of freshmen and sophomores, who are coming in (and) learning. And then obviously, our senior core which is fantastic. We’re just gonna keep building, and hopefully we keep building throughout the playoffs. We’re gonna take ourselves far.”

The team has lost just one of its last five games. With Phillips at the helm, the defense has been stout, allowing just two goals over the five-game span. Whatever the Bobcats have been doing, it’s been working, and the plan is to maintain the success the same way it was created.

“You’ve just got to prepare the same,” Phillips said. “Every day you’ve got to take one game at a time. One day after the next, it’s just, ‘Here’s the next game.’ You can’t think, ‘This is the first playoff game,’ it’s just another game. You don’t want to get into your head too much and think too much about it. You just want to go in, play with your heart and do the job.”