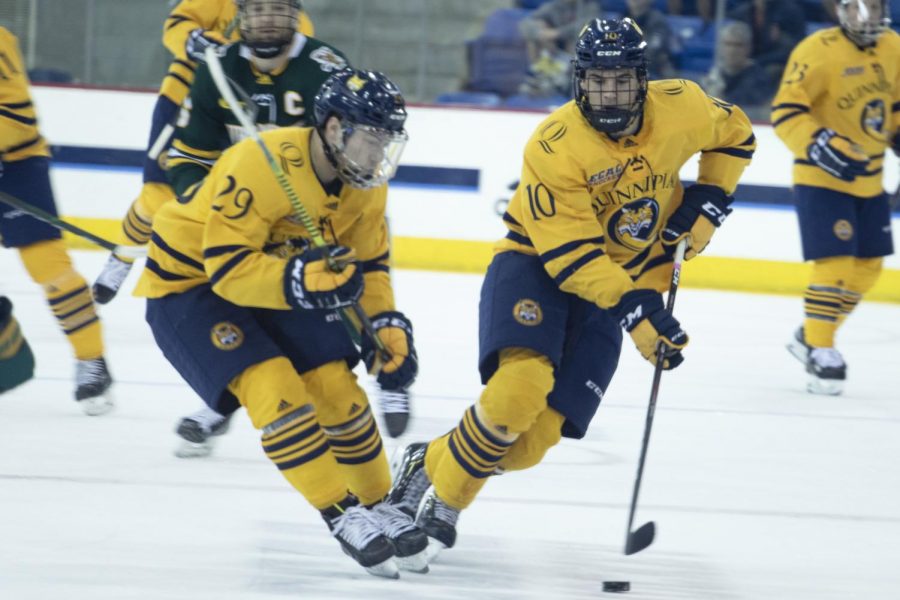 “I thought [Petruzzelli] was good, he played well, was confident. He missed a couple of days early in the week to get his wisdom teeth out,” Quinnipiac head coach Rand Pecknold said. “He was back on the ice Wednesday and had a good week of practice, and I thought mentally he was focused and ready to go today.”

Quinnipiac junior goaltender Keith Petruzzelli recorded his first shutout of the season, and fourth of his career, in a 21-save performance.

After going more than half of the first period without a goal, senior forward Nick Jermain exploded through the neutral zone as sophomore defenseman TJ Friedmann fired a stretch pass up to freshman forward Skyler Brind’Amour, who then perfectly placed a touch pass to Jermain.

Jermain thoroughly finished off the crisp passing by faking a shot, pulling the puck to his backhand and flipping the puck top-shelf, a move he commonly showcases.

It's Nick Jermain with his signature move. Shot fake, pull to the backhand and roof it

De Jong located the rebound that Vermont’s senior goaltender Stefanos Lekkas allowed and promptly slid it past his pad for his third goal of the game.

“I’ve been happy with our depth at forward this year, it’s as good as we’ve had in a long time,” Pecknold said. “It’s been an issue the last couple of years, so this year I think we’ve rectified that problem. We’re getting a lot of good play out of all four lines.”

Vermont began the second period determined to eliminate the two-goal deficit, and the players dominated offensive possession throughout most of the period, keeping Quinnipiac on its heels the whole time.

A much-needed TV timeout for the Bobcats, followed by a power play opportunity, helped them regain momentum and completely dominate possession for the rest of the period.

“I thought Vermont had a really good push to start the second, [Kevin] Sneddon did a good job of getting his team ready to roll,” Pecknold said. “They almost changed the tide there. I thought we had a lot of panic in our game. I think we just settled down, had a little more poise after the second commercial break. Our compete level got better, we started winning races and battles.”

Despite not connecting on the man advantage, Quinnipiac continued to dominate, which led to a fortunate bounce during an odd-man rush. The puck awkwardly bounced around the slot and somehow found its way into the back of the net.

The goal was credited to Bongiovanni, his team-leading fifth goal of the season, which gave an assist to both de Jong (his second point of the game) and junior forward Odeen Tufto (his team-leading seventh).

“Things are kind of just going my way, trying to do the right things and focus on team play first. I get some lucky bounces like here today,” Bongiovanni said. “When things are going your way they’re going your way.”

Quinnipiac started the third period aiming to expand its lead but nearly gifted Vermont an opportunity to claw its way back into the game. Two Quinnipiac penalties early in the third gave Vermont a 5-on-3 power play.

After Vermont failed to capitalize on the opportunity, the physicality picked up. The game had been physical throughout, but the level of chippy play and chirping became a theme during the final period. It came to a peak when junior forward Joe O’Connor celebrated near the Vermont bench.

“I was committed (to Vermont) for like two years before I found Quinnipiac,” junior forward Joe O’Connor said. “There’s some pretty bad blood there for me.”

O’Connor was constantly throwing body checks in the corners for Quinnipiac trying to give space to his fellow linemates. Eventually, his hard work would award a two-man breakaway early in the third.

O’Connor originally looked to pass the puck across the crease but ultimately decided to fire a shot underneath the blocker of Lekkas extending Quinnipiac’s lead to four.

“I knew he was cheating a bit, I was going to pass but then their d-man slid,” O’Connor said. “When he slid, I saw his stick and I just tried to float it in low blocker and luckily hit my spot.”

A total of seven penalties were called in the third, including a five-minute major and game misconduct on Vermont’s senior forward Matt Alvaro for a check-from-behind.

Quinnipiac’s next pair of games will be played on the road on Friday, Nov. 1, and Saturday, Nov. 2, against Arizona State. The two faced off in the first round of the NCAA playoffs last season.

“I thought the guys were locked into what we need to do with our identity to win hockey games, we got our reward today,” Pecknold said. “It’s a good win for our young team.”