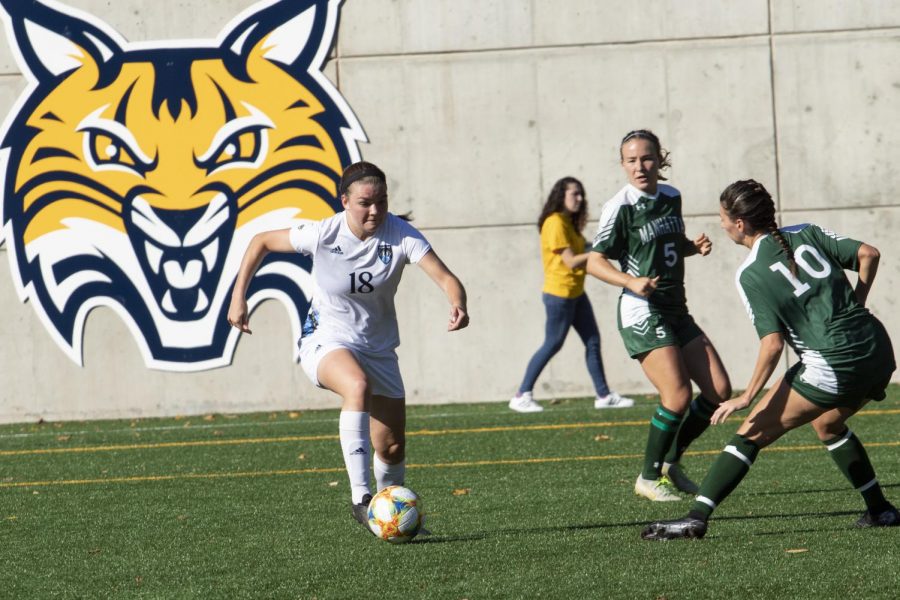 The Quinnipiac Bobcats women’s soccer team hosted the Manhattan Jaspers in a MAAC showdown that ended in a 1-1 draw.

Both sides battled for possession the entire match with each side controlling momentum for brief periods. Quinnipiac led the match with a possession percentage differential of 51% to 49%.

The first opportunity of the game fell in favor of Manhattan with about 13 minutes remaining in the first half. Manhattan’s team-leading goal scorer, junior forward Arianna Montefusco, headed home her eighth goal of the season, tying the MAAC lead, off a corner kick from junior midfielder Tia Painilainen.

“The first goal, 90% of the time the team’s going to win,” Quinnipiac head coach Dave Clarke said. “You hate to say that and you don’t tell them that, but it’s a reality where the first goal is massively important.”

Once the second half started, the intensity began to pick up. Both Quinnipiac and Manhattan applied more pressure on the defensive backs attempting to force turnovers.

In a game that was riddled with turnovers, the teams were looking for the right one to capitalize on. A couple of chances occurred at each end but were ultimately snuffed out by goalkeeping or stellar defensive play.

“To learn a process for a lot of the younger players, if you look at how the first half ended, nine sophomores and freshman on the field,” Clarke said. “They’ve got to learn that these teams are just fighting, the two teams that most teams want to beat in the MAAC are Monmouth and us.”

The match eventually headed to overtime, which brought handfuls of frantic, last-minute plays to net the game-winning goal.

Quinnipiac dominated the first half of overtime, controlling the ball in the offensive third of the pitch for most of the 10-minute period. Unfortunately for them, none of the attempts would reach the back of the net.

With just a few minutes left in the first half of overtime, Manhattan developed the best possible opportunity it had all game besides its lone goal, but freshman goalkeeper Meaghan Phillips punched away the headed shot off a corner kick.

“Defensively I think we’re solid, we’re doing a lot of good little things. The last three goals have all been set plays and the one before that was a miss-hit,” Clarke said. “They’ve kept clean sheets too so only Monmouth has a better defensive record.”

Manhattan flipped the field of play at the start of the second overtime. The pressure was on Quinnipiac to prevent a death blow, and they performed confidently. At one point, they counter-attacked and generated an excellent chance, but sophomore goalkeeper Kim Mains refused to give up the go-ahead goal.

The game led to a draw, which Quinnipiac, though not approving the outcome, was content on claiming at least one point in the match.

Quinnipiac will play its final regular-season game at home Wednesday, Oct. 30, at the Quinnipiac Soccer & Lacrosse Stadium as it hosts Sienna.