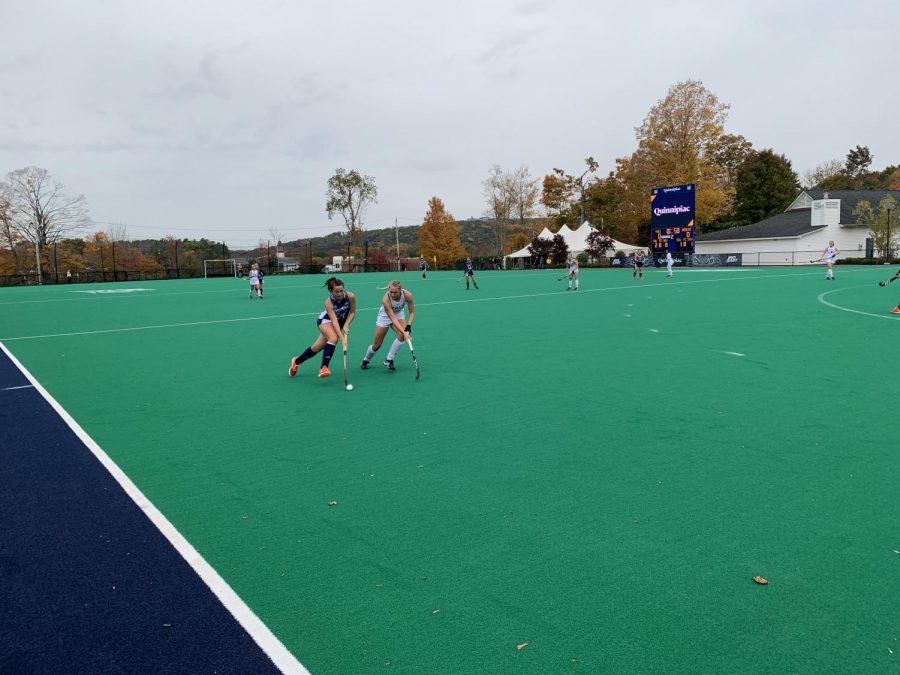 A game dedicated to the seniors of the Quinnipiac Bobcats field hockey team resulted in a tough 2-1 loss against the Yale Bulldogs.

“I think it’s a beautiful experience, just to be able to go from seeing so many before me to so many after,” Blum said. “There’s so much talent that has come through Quinnipiac, from our class to the freshman class now.”
Early in the first quarter, both sides battled to maintain control of the ball and generate a couple of scoring chances but neither side could capitalize. Quinnipiac’s freshman goalkeeper Mack Vorel stood tall early on as she denied two high-quality opportunities for the Bulldogs.

Seconds before the halftime buzzer, Quinnipiac notched the first goal of the game. Strubbe scored her team-leading sixth goal of the season off a penalty corner. Martinez recorded the 20th point of her career assisting on the goal.

“The first half was good, we went to the locker room with big energy,” Strubbe said. “We came back and something happened. Five minutes without our full focus can change the game.
Yale flipped the field of momentum in the second half by dominating the possession game. After several scoring chances, Yale broke through on a penalty corner off a shot from junior forward Olivia Levieux, her team-leading seventh goal of the season.

“I think the most troublesome thing for us is the lack of consistency,” head coach Becca Main said. “You can be dominating a game for 30 minutes, and be ahead at half and just make critical errors at times that are unacceptable by people that don’t make those kinds of errors.”
The Bulldogs did not stop there and ground out the deciding goal late in the match. Senior midfielder Bridget Condie dangled through the Quinnipiac defense and fired a shot into the bottom left corner.

Quinnipiac looks to bounce back next weekend as the team faces off at Old Dominion on Friday at 2 p.m. and host Brown on Sunday at 1 p.m.