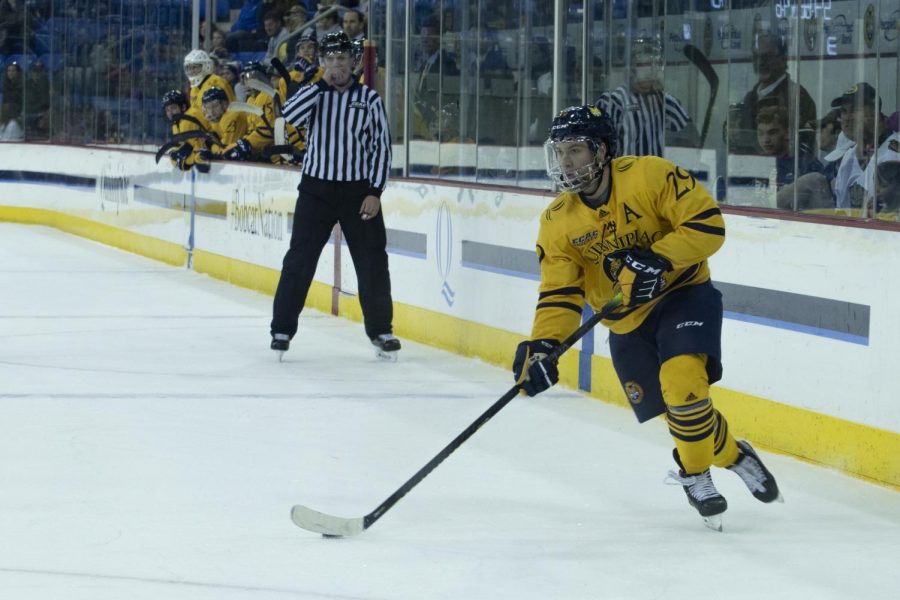 Identity, culture and buy-in. Those are the three words that Quinnipiac men’s ice hockey head coach Rand Pecknold preaches to his team. Pecknold challenged his team’s “buy-in” after a 4-2 loss against Maine on Friday.

Saturday was a wake-up call, as the Bobcats (3-1 overall, 0-0 ECAC Hockey) defeated the Black Bears 4-3 to split the two-game series.

Pecknold credited Maine but was happy with his team getting the win.

“I thought we were resilient and Maine was good again,” Pecknold said. “We made mistakes all night, but we were good. We controlled the puck a lot and I thought we had a good effort. We’ll take the win and move on.”

Maine picked up where it left off, as sophomore forward Jacob Schmidt-Svejstrup took the first shot of the game and found the back of the net to make it a 1-0 lead.

Quinnipiac took advantage, as 22 seconds later sophomore forward Michael Lombardi wristed a puck from the boards and it squeaked by Theissen to tie the game.

The Bobcats weren’t done, as Maine’s attempt to clear the zone was intercepted by freshman forward Ethan Leyh, and he shot in the top-right corner of the net to make it a 2-1 lead.

Leyh now has two goals in four games and credits his teammates for helping him acclimate to the college game.

“They’ve done a really good job,” Leyh said. “All the older guys have been welcoming to me and have shown me the routes to be successful in this league. I can’t thank them enough for helping me all the time.”

The Bobcats continued the attack on Theissen, as 45 seconds later sophomore forward Ethan De Jong beat Maine to the corner of the offensive zone and beat Theissen to the opposite post to make it a 3-1 lead.

“We don’t really look at those things,” Leyh said. “We just expect whoever it is and try to get goals on him. He’s also a really good goalie, and we knew we had to get traffic on net.”

Maine pulled Theissen for Swayman to start the second period. Swayman didn’t allow a goal in the period and that played into Maine’s offense.

The Black Bears went on a power play, and Schmidt-Svejstrup found himself open at the point and fired one past junior goaltender Keith Petruzzelli to make it a 3-2 game.

The score held like that just over three minutes into the third period. Sophomore forward Wyatt Bongiovanni got control of the puck on a faceoff and elevated the puck past Swayman’s blocker side to make it a 4-2 game.

That was Bongiovanni’s second goal in two nights, and Pecknold is excited that he’s starting to find the net.

“(Bongiovanni) had a great spring, great summer and great fall, he’s committed and I’m really happy with him,” Pecknold said. “He was on the all-rookie team, and that’s not easy to do in our league. He’s taken a jump and has been great for us so far.”

The Black Bears showed resilience, as they had another power-play opportunity. Junior forward Eduard Tralmaks found himself all alone in the offensive zone and capitalized to make it a 4-3 game.

The Bobcats held strong and all of their wins have come by one goal. They outshot Maine 38-25 and Petruzzelli made 22 saves.

Quinnipiac will be back in action on Oct. 27, as the Bobcats will be home against the Vermont Catamounts at 2 p.m.