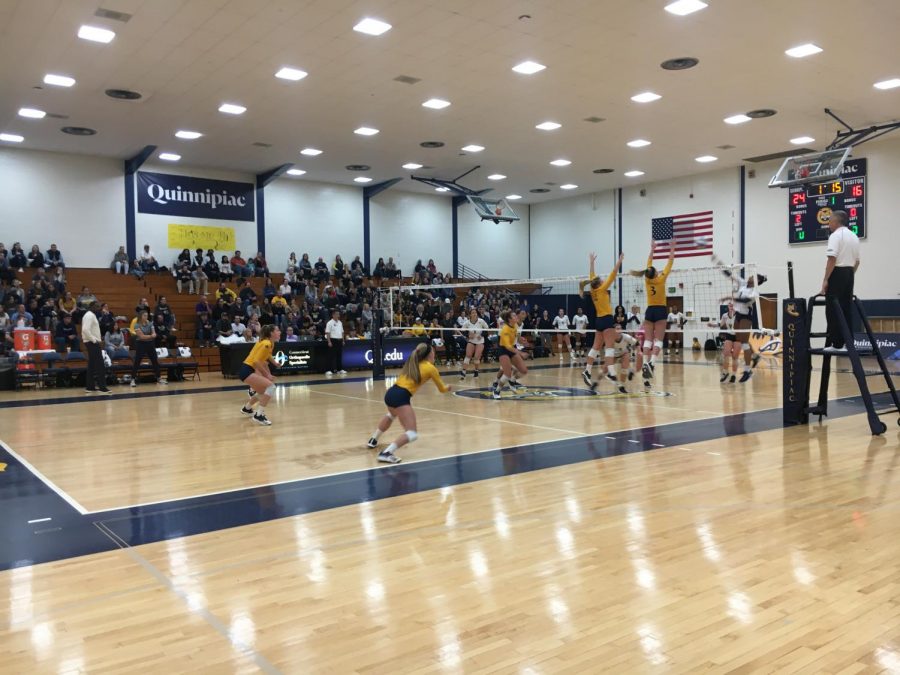 The Quinnipiac women’s volleyball team picked up its fourth win in conference play over the visiting Canisius Golden Griffins in four sets on Saturday, Oct. 19.

Quinnipiac head coach Kyle Robinson spoke not only about the victory, but the family atmosphere of Quinnipiac.

“We love it,” Robinson said. “We talk about this all the time. We love the family atmosphere that Quinnipiac is so when that family shows up to the game, all those extended cousins and brothers and sisters, when they show up it’s even more fun. We know the deal. It’s hard to get everyone out. Especially on the weekends at 1 o’clock. It’s tough at times, but we love if its one fan or hundred fans. We love what happens when they all show up.”

Sophomore outside hitter Olga Zampati lead the team on the offensive end with 12 kills. Quinnipiac was distributing the ball, finishing with 57 assists compared to Cansisius’ 35. Freshman outside hitter and right side hitter Aryanah Diaz had a game-high 26 assists.

Canisius jumped out to a fast start, winning nine of the first 10 points in the first set. Quinnipiac battled back, cutting the deficit to 21-18 and making the first set interesting, but Canisius held on to win 25-19. The biggest difference was the hitting percentage, with Cansisus at .194% while Quinnipiac was at .073%. Quinnipiac would outplay its opponent in this category in the three remaining sets.

Robinson stressed that Quinnipiac’s success today wasn’t due to just skill on the court. Volleyball can be a mental game, and the mental side of the game played a big role in today’s contest.

Quinnipiac got too comfortable when they had a 24-20 lead in the third set, and Cansisus saved all four set points to tie it at 24. The Golden Griffins had set point leading 25-24, but Quinnipiac junior right side hitter Morgan Sherwin prevented them from taking the set with a kill. The Bobcats ended up winning the set 27-25 off another kill by Sherwin.

After the fourth set was tied at 14-14, the Bobcats pulled away by winning next 11 of the 14 points. Sophomore right side hitter and outside hitter Georgia Tselepi ended the match with a kill, assisted by Diaz.

“(This lineup is) definitely something that works a lot better than before,” Diaz said. “You know we have a lot of hitters that are spread out more so we always have someone to rely on. We have more people to rely on I guess to give the ball in tough positions.”

The Bobcats look to continue their momentum tomorrow vs. Niagara at Burt Kahn Court on Sunday, Oct. 19, at 1 p.m.