Nothin’ but Nylon: Break it down, grow it 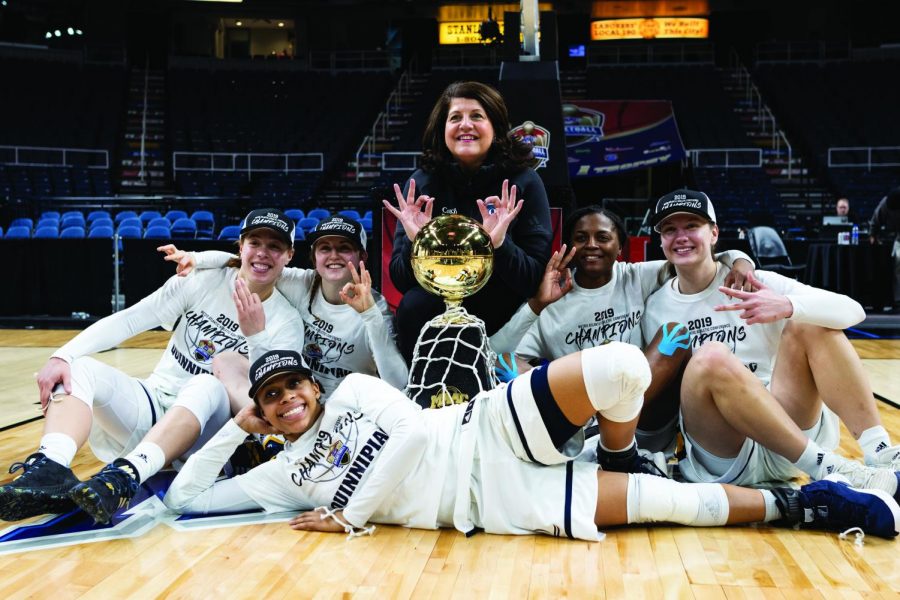 The Quinnipiac women’s basketball team just lost one of the greatest senior classes it’s ever fostered. Three straight MAAC tournament championships and one sweet-sixteen appearance later, those seniors have graduated and left gaping holes in a team desperate to maintain its historic success.

That core five rattled off 52-straight wins in conference play, a streak that still stands today. They won three consecutive MAAC championships. The average margin of victory in those three championship games was over 15 points. But that’s all in the past.

“New names, new faces,” Quinnipiac head coach Tricia Fabbri said. “We’re going to go through some real growing pains, as we’re seeing right now, and turn the ball over a little too much. But, on the flip side, I’ve seen some incredible length, athleticism, some easy buckets on the inside and some incredible razzle-dazzle from the perimeter as well.

“So, it’s a build it day-by-day, possession-by-possession, break it down, grow it, and trying to get some consistency within how we play basketball, which is pressure and pace and taking care of the basketball.”

Coaches and players alike are buying into the future of their team. There’s no time to think of what was, only what still can be.

“We gotta look forward,” sophomore guard Mackenzie DeWees said. “The past is the past, and right now we have great talent that came in, and we have returners that can play now. We have a great vibe on the team, a great chemistry, and we look forward to playing in the MAAC.”

The incoming talent and the returners may take some time to gel, but nobody on the team seems worried about the transition from past to present.
Veterans
The returners are proven players. Seniors like guard Taylor Herd and forwards Paige Warfel and Jaden Ward know what it means to play at Quinnipiac. The goals are set high, but not hopelessly. Every goal this team sets for itself is intentional.

“Before coming here I was never detail oriented, but that’s really something stressed by (Fabbri) and by (assistant coach Brian Wilson),” Herd said. “So, just getting those freshmen to know that spots are really important for us, executing our plays, knowing where to be, knowing how to adjust, being adaptable has been I think the main thing we’re working on.”

Herd appears prepared for her new role on the team. One year removed from taking home MAAC Sixth Player of the Year honors, Herd finds herself in the spotlight for her final season. Her leadership role is essential moving forward both in terms of winning now and developing talent for the future.

“It’s been really fun trying to figure it out,” Herd said. “We have a lot of young players, but it’s young energy and I think that’s what has been most fun. It’s a different type of energy, and I think from the senior class we know what we want, which is that fourth ring, to make history. And, (the new players) want to continue that legacy, so it’s really fun putting that together and figuring it out.”

When it comes to Herd’s personal goals this season, she hopes to bring a winner’s attitude and energy every night, even if her shot is off. Her shooting, though, is one place that will have to improve this season if the Bobcats hope to achieve the same success they have been in recent years.

Herd shoots 35% from the field in her career and 31% from beyond the arc. Those numbers are respectable but need to climb this season. Fey and Strautmane each shot 43% from the field in their careers, and both shot 34% from three. Herd should aim to match these marks this season to truly blossom as a star and a leader, and take this team to the heights it wants to reach.

The point guard situation is an aspect of the lineup that leaves little to be desired. DeWees and junior transfer Shaq Edwards both enter the season with confidence, and perhaps more importantly, skill.

“I stepped in as point guard this year, and I had a great role model – Edel Thornton – who graduated last year,” DeWees said. “She really shaped me into the guard I am today, and as point guards, Shaq and I, we really have to be leaders. I think that right now we’re a new team, so we’re evolving and we’re doing the best we can, and we’re excited. The team is looking great.”

It will be interesting to see which point guard shines brightest this season. DeWees has shown flashes of Thornton-like play, a style that’s proven to win. DeWees has more steals in her career than fouls, a stat that demonstrates a high basketball IQ.

At the same time, her 29 career turnovers outweigh her 20 career assists. A negative assist-to-turnover ratio is a worrying statistic, and DeWees’ ability to make smarter decisions this year could decide whether she fits into a starting role or continues to enter the game off the bench.

Edwards came over from La Salle University last season and sat out every game. This year she’ll make her debut for the Bobcats. She’s drawn praise from her teammates and coaches, and her play speaks for itself. In her one year at La Salle, Edwards averaged nine points, three assists and three rebounds per game.

“I have a big leadership role to step in to as an upperclassman,” Edwards said. “It’s going to be a big role, leading everyone, as far as this being my first year here and in the system. But I had last year to learn a lot from (Thornton) and (Martin) and even Jen Fay.”

Either guard could start at the point, and both could play at the same time to form one of the best backcourts in the MAAC. No matter what Fabbri decides to do with these guards, each should have a positive impact on this team.
Newcomers
As for those who are yet to play a minute of college basketball, it shouldn’t be long before they’re making impacts of their own. That couldn’t be more true than with the bigs this year. Freshman Cat Almeida and sophomore Rachael Stovall both expect to meet adversity with confidence and grace on and off the court.

“It’s been pretty different than high school, which I expected,” Almeida said. “It’s been great here, the coaches and my teammates have really been awesome at getting me used to everything. College basketball, playing against girls that are bigger than me, older than me, stronger than me.”

With support from her teammates, Almeida hopes to come in and make an immediate impact. She enters the program well equipped to dominate down low thanks in large part to her father Mauricio, who stands at 6-feet-7-inches and once played for the Brazilian junior national basketball team. Almeida cites training with her father as the reason for her ability to play well against stronger opponents, plenty of which she’ll face in her first year of college.

Almeida is the tallest player in the history of the women’s basketball program. Standing at 6-feet-5-inches, she has two inches on her closest teammates. Luckily for Fabbri and the rest of the Bobcats, Almeida’s play isn’t limited to that of a typical big.

“I think I also bring a unique thing to the program, as I don’t just sit in the paint,” Almeida said. “I like to shoot, I like to play on the perimeter a little bit, so yeah, I’m excited for people to see.”

Stovall adds a similar skill set to the team. After sitting out her freshman year due to injuries, she enters this season eager to show what she’s capable of.

If Almeida and Stovall reach their potential this season, the Bobcats could be a force not just in the MAAC, but in the NCAA. It’s rare to see a team with two, modern bigs on the floor at the same time.

The two should strive to learn how to coexist on the court, which would instantly transform Quinnipiac into a rebounding juggernaut. They both have the ability to step out and hit a three as well, adding a new layer to the offense. If defenders follow them out, then guards like Edwards, DeWees and Herd could drive to the paint for layups without taller defenders to finish over.

Should the forwards step off of Quinnipiac’s bigs, then the guards could kick to the three-point line where either big could knock down a three. No matter the scenario, it’s always advantage Quinnipiac with these two on the court.

The Bobcats have themselves in a position to grow all season long, and that growth could happen exponentially. Once it starts to click, the team might look like it never missed a beat coming off last season.

With so much new and young talent added in one offseason, it can be difficult to juggle personalities and egos, but this team hasn’t found either to be a problem early on. It’s been nothing but good vibes in the locker room and on the court.

There are only a handful of coaches equipped to lead a group of young players with almost unheard of potential. Luckily for Quinnipiac, Fabbri is one of them. If it weren’t for Fabbri, who enters her 25th season this year, this team might take a step back, but with such a capable leader the Bobcats should be fine.
Prediction
MAAC tournament championship, NCAA tournament first-round loss.