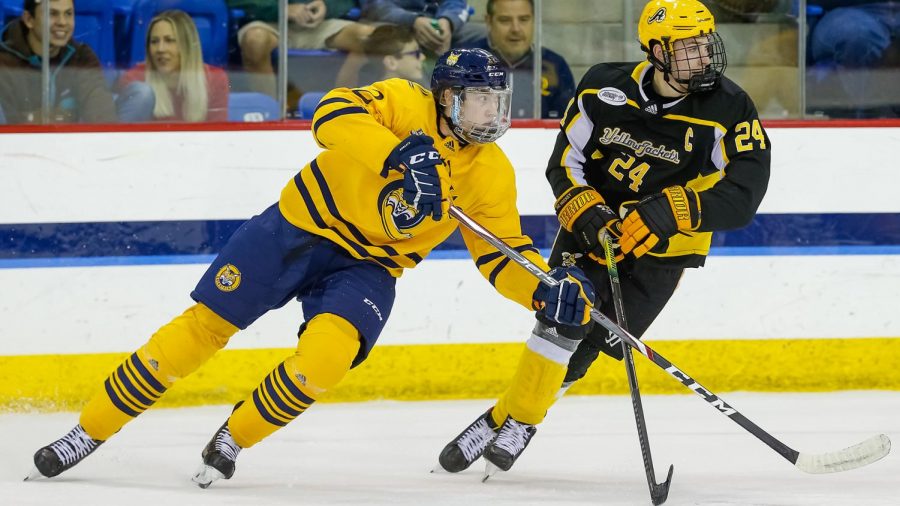 The nameplate “Brind’Amour” immediately pops off of the sweater for multiple reasons. Not only is it because of the rare apostrophe in the middle of the last name, but because it reminds those spectating about the legend of the name that came before Brind’Amour.

His father, Rod Brind’Amour, was the captain of the hometown Carolina Hurricanes and helped deliver the first and only Stanley Cup in franchise history back in 2006. He is now the Hurricanes head coach and brought them to the Eastern Conference Finals in May 2019

However, Brind’Amour himself doesn’t look too deeply into stuff like that.

“I don’t really think about all that,” Brind’Amour said. “I like to stay busy all the time, focusing on school and learning there, then coming to the rink and working out and skating.”

The even-keeled freshman has been cool, calm and collected since arriving in Hamden. Despite all the noise and buzz around his name, Brind’Amour has been able to stay on his path of focusing on school and hockey regardless of the outside noise.

The moment never seems to be too big for him, and that may be a product of being on the ice with the Hurricanes right after they won the Stanley Cup when he was just seven years old.

Even with his personal achievements, Brind’Amour doesn’t let the magnitude of the moment take over. That was proven when he opted to play golf with his dad instead of attending the 2017 NHL Entry Draft, in which he was taken 177th overall by the Edmonton Oilers.

“I didn’t want to just sit at home,” Brind’Amour said. “I wanted to just get out of the house and not just constantly think about it and watch it.”

Experiences like these cannot be taught, so for Brind’Amour to be able to be humbled multiple times at such a young age gives him quite the leg-up on others. Even though the pressures of getting drafted could seem daunting and uncomfortable, Brind’Amour makes it seem normal to have an NHL logo next to your name on the pre-game lineup sheet.

“Getting drafted didn’t change my life or my thought process,” Brind’Amour said. “It was obviously a dream come true and a nice honor to be taken by the Oilers, but didn’t change the day-to-day for me at all.”

To some, getting drafted is one of the biggest days of their lives. To the son of an NHL legend, he knows that it’s only the beginning. Getting drafted is a great milestone, but those who know the league know that it is only your lottery ticket to try and compete at the highest level. Nothing from that point on is given, everything is earned.

If anyone knows that, it is the ninth overall pick in the 1988 draft out of Michigan State, Rod Brind’Amour. From a young age, Rod prided himself with his off-ice training. He would work out everyday no matter what and said the key was “going on days I didn’t want to.” You can even find his famous workout videos and stories on YouTube titled, “Rod the bod.” Former teammates even described working out with him as the “scariest day of their lives.”

The effect that a father figure like that can have on a child is immeasurable. That is the ideal upbringing in terms of someone being an example, and the portrayal of hard work everyday is something Skyler knew he could learn from because it was in front of his face every day.

“When I was younger, it was huge,” Brind’Amour said. “I do my own thing now and have my trainer back home, but he’s always competing and having fun. He’s still got me beat by a little bit.”

Being beat out by his father in the weight room is nothing to be ashamed of since he can squat and lift more than the majority of the players he coaches on the Carolina Hurricanes as well.

It seemed as if Skyler would follow his dad’s footsteps to Michigan State when he announced his commitment there following the 2017 NHL Entry Draft, but there was a change of plans.
“It just wasn’t the right fit anymore,” Brind’Amour said. “I was actually recruited by the previous coaching staff there, and I just didn’t think it was right for me after that changed. Thankfully Quinnipiac had an open spot.”

Quinnipiac’s open spot seems like the right fit for Brind’Amour if he’s looking for a consistent coach. Head coach Rand Pecknold has been at the helm of the Bobcats for 26 years, and a change doesn’t seem imminent any time soon.

Quinnipiac is lucky to have added Brind’Amour to the squad because of how many key departures there were following the Bobcats’ Midwest regional final loss to the back-to-back national champion Minnesota-Duluth.

Former Quinnipiac captain Chase Priskie is now a member of the Hurricanes organization after being drafted by the Washington Capitals. Multiple players from last years’ team are now at the NHL or AHL level as well, including defenseman Brogan Rafferty, who is on the Vancouver Canucks and Andrew Shortridge who is currently with the San Jose Barracudas. Despite missing the playoffs last season due to injury, former Quinnipiac defenseman and transfer from Boston University Brandon Fortunato signed an entry-level contract with the Nashville Predators as well.

The freshmen will play a pivotal role this season, and Brind’Amour may have an even larger role as a freshman with juniors experience in Canada. Not being a true freshman like some others in the class will be another advantage for Brind’Amour, who has two years of experience with the Chilliwack Chiefs in the British Columbia Hockey League (BCHL).

He had 24 points in his first season and 44 in his second season, with 52 games played in each season. When asked about adjusting to the college game and a new role, Brind’Amour still wasn’t sure what to expect.

“I don’t know what my role will be yet,” Brind’Amour said. “Right now it’s just whatever the coaches want me to do, whether it’s play wing, play center or kill penalties. Whatever I need to do to earn ice time, we don’t really have set roles yet.”

Brind’Amour’s role is anything but established or consistent. He was the center of the top line in a 4-4 exhibition game tie vs. Brock and then was the third line left wing when the Bobcats defeated AIC 3-2 on opening night. He got his first goal of the season the following night at AIC.

Despite the lack of clarity surrounding Brind’Amour’s role and playing time, Pecknold said that he is grateful to have Brind’Amour and the rest of the freshmen on board.
“It is really big to have Skyler Brind’Amour added to freshman class,” Pecknold said. He has the experience at the junior level that will be valuable, since it’s really hard for our 18-year-olds to jump in and compete.”

As the season progresses, Brind’Amour’s role with the team will become clearer as every game comes and goes. In terms of the parental situation and advice Skyler has been presented with, it seems like that role will be a big one.

“Ultimately, I was very fortunate to be around guys who played at the NHL level,” Brind’Amour said. “I think being able to see what they do and how they handle themselves was huge, and something I hope I can continue to benefit from.”