The Fall of The Washington Redskins 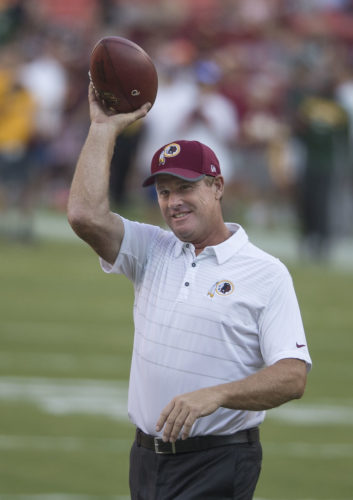 We’ve all had 8 a.m. classes. Hearing the alarm ring, seeing the time on the clock, thinking that there is nothing worse than having to get out of bed for an early-morning lecture about Sigmund Freud.

Dan Snyder, the owner of the team, called Gruden to the Redskins facility at 5 a.m. on Monday to inform him that he was fired.

Gruden’s lifetime record with the Redskins leaves a lot to be desired. Through five complete seasons and the five weeks of the 2019 season, Gruden has a 35-49-1 record.

It is not easy to find a franchise quarterback these days. Ask Denver Broncos general manager John Elway.

But the Redskins have struggled mightily to find consistency under center.

In 2017, Cousins’ passer rating of 93.9 ranked 12th in the league according to Pro Football Reference, notably beating out Atlanta Falcons quarterback Matt Ryan who was the reigning MVP of the league.

Despite Cousins’s performance, the Redskins let him slip away. The Minnesota Vikings made him a standout offer, forking over $84 million worth of guaranteed money over three years. Snyder failed to match what was a record-setting NFL contract at the time and watched his 28-33-1 division-winning quarterback prance out the door with cash flowing out of his pockets.

While that record may sound less than impressive, Washington quarterbacks not named Kirk Cousins are 43-76 in the last 11 years and Pro Football Reference ranks Cousins as the fifth-best quarterback in the franchise’s history in terms of approximate value, a stat used to measure a player’s contribution to a team.

Both before and after Cousins’s reign in Washington, the Redskins have swung and missed at numerous potential suitors under center. Whether the player in question is a young player fresh out of the draft or a veteran free agent, the Redskins have come up empty.

Robert Griffin III was selected with the second overall pick in the 2012 NFL Draft and was projected to be a star quarterback for the Redskins for years to come.

However, as the 2013 season came to a close, RGIII’s passer rating sat at 82.2, good for 16th worst in the league among the 37 qualifying quarterbacks according to Pro Football Reference.

The 2015 season was even more of a disaster for him, as he suffered a concussion during a preseason game and was replaced. That replacement went on to steal his job and set the league on fire, securing the fifth-best passer rating in the league that year.

That man was Cousins. The front office used a number two pick on a player who would lose his job to a fourth-round afterthought selected as insurance for their brand-new superstar.

And here we are, putting the blame on Jay Gruden.

There are a lot of problems with the 2019 Redskins. The offense has scored the fourth-least points in the league through the first six weeks and has the seventh-worst yards per play average, wallowing at 90 and 5.1 respectively, per Pro Football Reference.

While these numbers are indicative of bad quarterback play, there are a number of other factors that contribute to the bagel on the win column for the Redskins.

The rushing attack is extremely lackluster beyond running back Derrius Guice, who is on the shelf with a torn meniscus. The offensive line has allowed 10 sacks, tenth most in the league. The defense has been laughable, allowing the fourth-most yards and the sixth-most yards per play, per Pro Football Reference.

Snyder has supplied Gruden with a bucket of eggs and a stick of butter and told him to make a cake. Gruden’s job is to make the best of what is given to him.

“What’s happened over the 20-year period is that he has taken a franchise that has been universally respected in sports, not just the NFL, and proceeded to drag down its mediocrity,” son of former owner Jack Cooke told the Washington Post. “It’s no longer one of the premier sports franchises in the United States.”

The biggest source of inconsistency on the 2019 Redskins remains the quarterback position. Rookie Dwayne Haskins began the season fighting for a starting job against veteran Case Keenum, eventually losing the battle.

After an injury to Keenum, Gruden made the decision to start veteran backup Colt McCoy over Haskins against the vicious Patriots defense, who have allowed the second least yards in the league and accrued 24 sacks against opposing quarterbacks, which is tops in the NFL according to Pro Football Reference.

Haskins being asked to face off against the Patriots as his first NFL start is equivalent to giving a young Luke Skywalker from Star Wars a lightsaber and telling him to take down Darth Vader.

It simply will not end well.

Starting Haskins against a team with 24 sacks through four weeks behind an offensive line that has been shaky all year is a recipe for disaster. If Gruden makes that decision, he ends up with either a quarterback who has lost his confidence after being battered by a superior team or an injured quarterback.

The Redskins offensive line allowed McCoy to be sacked six times in the affair with the Patriots. In what is essentially an unwinnable game for Washington, Gruden employs a played an NFL game before.

McCoy had few targets to throw to against the Pats. Number one wide receiver Terry McLaurin was seeing coverage by All-Pro cornerback Stephon Gillmore. Second wideout Paul Richardson was unable to break free from cornerback J.C. Jackson, who limited Richardson to two targets throughout the whole game.

Another piece was missing for McCoy. Former Redskins wide receiver Josh Doctson was cut by Dan Snyder. Snyder selected Doctson in the first round of the 2016 NFL Draft and released him after three full seasons with the team.

Doctson represented an essential part of the Redskins passing attack, as he collected the second-most receiving yards on the team in 2018. Still, Snyder let him go.

Perhaps the most damning piece of evidence as to why Snyder and not Gruden is the cause for the tanking team is offensive tackle Trent Williams. Williams had a growth on his head that had to be removed and was unhappy with the team’s handling of the medical process.

The smart thing to do would be to trade the disgruntled star and collect assets for him, much like the Pittsburgh Steelers did with Antonio Brown and the New York Giants did with Odell Beckham Jr.

Instead, Snyder has opted to keep Williams in the hope that he will play for the team again, something Williams has insisted will not happen.

The Redskins organization, not Jay Gruden, forced Williams into a holdout after handling his medical situation poorly, then failed to grant his request to play football elsewhere.

Snyder had Kirk Cousins, the most consistent quarterback Washington had seen in a long time, and let him walk. Snyder wasted a first-round pick on a wide receiver. Snyder let a star offensive tackle sit on the sidelines. Snyder failed to bolster the defense, failed to secure a capable and durable quarterback and failed to supply aerial weapons for his offense.

Snyder failed Gruden. Yet, here we are, watching Gruden browse through wanted ads while Snyder remains as the owner of the Redskins.