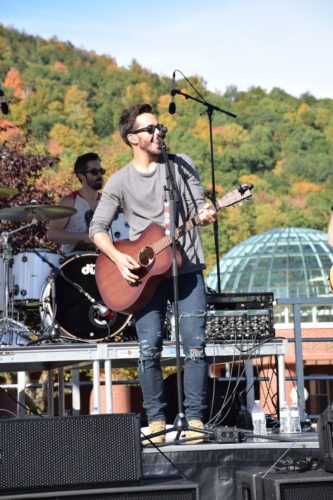 Fall Fest, Quinnipiac’s big concert of the fall semester experienced a change-up that made it into an event centered around fall-themed activities.

Upon entering Fall Fest this past Saturday, Oct. 12, there was an arch of yellow, orange and red balloons, followed by tables set up with blankets and shirts for attendees to take. Continuing onto the Quad, there were activities and numerous food options ready to go at noon. Free food trucks, doughnuts, candy apples, were all for the taking. There was a mechanical pumpkin, as well as cornhole and ladder toss to entertain the students while they enjoyed the crisp fall afternoon.

Since 2013, Fall Fest has been an event centered around a musical artist that would put on a big performance.  Each year, the concert took place in South Lot on the Mount Carmel Campus. The lot would have to be closed down for the weekend to accommodate all the people in attendance — usually over 1,000 students. 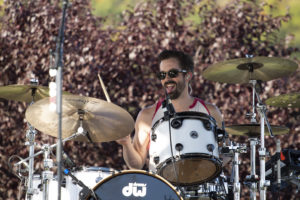 [/media-credit]Taylor Sniffen, the mainstage chair of the Student Program Board describes Fall Fest in the past as having an intense, chaotic vibe.

“It started out as a concert in the South Lot in early September, so it was very hot,” Sniffen said.  “You were usually pushed up against barricades, and it was supposed to be more of the banging concert feel.  So instead of everyone pushed against a barricade, we were like, ‘why don’t we get out on the Quad and have everyone chill for a day?’”

In the past years, there have been artists such as the Plain White T’s, AJR and Timeflies. This year, The Sulls, Those Guys and Cale Dodds played.  Each group played for about an hour. The festival attendees heard a mix of pop, country and rock-n-roll as they sat on blankets and watched.

“I really love the vibe they’ve created on the Quad today. It’s not just a concert, it’s also activities, the food, people just hanging out,” Leah Lavin, graduate student in the 3+1 communications program, said.  “In the past, you would have to rush over to the South Lot, get through security, get in line. I like how this is more free-flowing. The atmosphere is a lot better.”

The first hour of Fall Fest was filled with people enjoying the food trucks, with the music playing over the speakers. The food trucks were crowd favorites such as Spud’s, Taco Pacifico and Ice Cream Emergency.

“The potato truck is what brought me here,” Regan Lundy, freshman Biology major, joked. “It’s been fun to chill outside today and enjoy the music.”

At 1 p.m., the first act came on stage — The Sulls.  The local band kicked off the concert by performing covers of rock songs.  The brother duo was voted best rock band in CTNow Best of Hartford Reader’s Poll.  Their simple sound of vocals, guitar, bass and drums made for a powerful sound. Their performance provided a great soundtrack for Fall Fest. As students wandered around the Quad, they enjoyed classic covers from two guys who showed they know how to rock.

During the first act, people were still wandering around, taking in what Fall Fest had to offer.  It was a new experience for everyone there as the event was no longer just about the music. It was about the atmosphere, the overall environment.  The new Fall Fest rebranded itself into being about the event itself.

“I like the fact that there’s a lot of vendors, and we get free food. I feel like this is the first time I’ve actually been able to enjoy the quad as a freshman,” Dylin Marano, occupational therapy major, said.  “I think it should be advertised more because I’m having a great time.”

At 2 p.m., the next act came on stage — Those Guys. The group of three men performed a mix of early 2010s pop throwbacks and classics that have been around forever.  They had high energy and made their time on stage fun and nostalgic. For everyone listening, they were transported to their early teen years when songs such as “Happy” and “Problem” were on the radio. Some people even got up and danced to the songs Those Guys played, while some laid on their blanket and soaked up the experience.

Once Those Guys left the stage, Cale Dodds entered.  Dodds is an up and coming country singer from Georgia.  He had charisma that captivated the people in the audience. Before introducing his original songs, he would make jokes about them. At one point, he called out to the crowd, 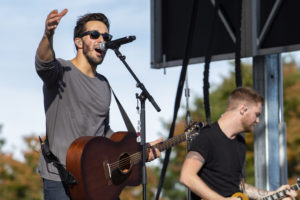 [/media-credit] “Anyone here ever been on a bad date? If you’re not raising your hand, is it because you’re with the person the bad date was with?”

He continued with his set, singing upbeat country songs interspersed with more jokes.  At the end of his performance, Dodds told the crowd he would see everyone at Toad’s afterward.

The three acts were unique in their own ways and made for a festival feeling.  There was a diverse range of music that would appeal to almost anyone.

“This year we were going for a different vibe, and we wanted to make more of a festival feel,” Dan Bahl, General Manager of WQAQ, said.  “We put out a survey for our members where we can get an idea of what they were looking for, what they wanted to hear from Fall Fest. We used that information and settled on what we have today.”

The new and improved Fall Fest featured three acts that played different genres of music and much more.

“I think that it’s really inclusive for a bunch of different people,” Mallory Sanderson, freshman finance major, said. “There’s music, food, activities, so there’s a lot for everyone.”