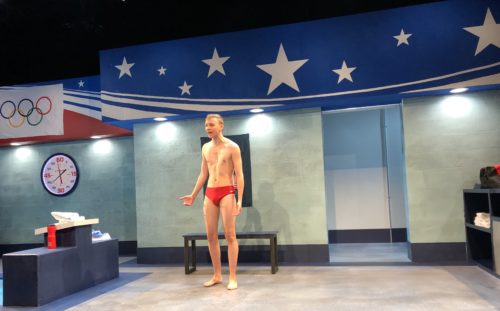 Vomit splattered across the stage, water splashed into the stands and baby carrots were thrown. And thrown again.

The Quinnipiac Theater Department immersed the students, faculty, staff and families in “Red Speedo,” the story of an Olympic-bound swimmer who becomes entangled in the use of performance enhancing drugs. The play ran Oct. 10-13, in the Black Box Theater at the Theatre and Arts Center.

The swimmer, Ray, was played by sophomore theater major Liam Devlin who said he’s far from an Olympic athlete.

“He’s a very interesting character because I am not very athletic so putting myself in the mind into one of the greatest athletes in the world is kind of interesting because I’ve never really dealt with that sort of perspective on things,” Devlin said before the show, wrapped snugly in a bathrobe.

When the play opened, Ray’s brother, Peter, played by Joseph Powell, a senior game design and development major, was talking with Ray’s coach. Ray’s coach was played by Julia Brignano, a junior Spanish major in the MAT program. Immediately, Peter established himself as quirky and assertive. He was a fierce advocate for his brother, but to a point where the coach was becoming uncomfortable.

That’s when Ray entered, sans bathrobe. He wore a tight red speedo and his back was plastered with a tattoo of a dragon-like creature. He was crunching noisily on a bag of baby carrots, which prove to be his go-to snack. The audience quickly learned that Ray is not the legal scholar that Peter is. In fact, he never went to college and has a hard time forming intelligent sentences.

Previously, Ray’s poor judgement and intellect motivated him to take performance-enhancing drugs from his ex-girlfriend, Lydia, played by Elizabeth Miller.

Miller, a senior health science major, said she and Lydia, while both tough, are very different.

“How she speaks is different,” Miller said. “Her background is very much different and her situation is very different and it’s been an interesting journey kind of figuring out her as a person and how I can portray her in the best way possible.”

Throughout the play, Ray is torn between his conscience and Peter, who encourages him to keep the drugs a secret to avoid destroying the sponsorship deal he just made with Speedo.

In his pursuit of the Olympics and a custom dragon-printed Speedo, Ray ingested cat medicine, proposed to Lydia and learned more about who he was.

Ray eventually disclosed that he’s been sleeping in his car and feeling generally hopeless. He felt that swimming is the only thing that will ever bring him success. And even swimming, he had done with the assistance of illegal drugs. We see the inherent weakness in someone who seems to have it all.

After a bloody fight, during which Ray almost drowned Peter to death in the pool on stage, Ray made a decision. The play ended with Ray’s voice ringing in the audience’s ear as his bloodied lips proclaimed, “I’m tired of winning.”

The stage then went dark.

Other than the riveting and realistic storyline, “Red Speedo” was filled with many subtle intricacies that made the experience more real.

The intimate Black Box Theater places the audiences an arm’s length away from the action, and sometimes less.

At times, the actors stood in the center aisle or sat on the steps at the feet of the people in the front row. When Ray pushed Peter’s head into the pool repeatedly, the audience had to duck to avoid being soaked by the spray of water.

The entire production, which lasted 90 minutes, only included four actors, but their words didn’t tell the story alone.

Emma Hubbell, a junior game, design and development major, was responsible for operating the sound board. She said being a part of the play is a great experience, no matter how you’re involved in it.

“It’s exciting to be a part of any of these productions because everyone works so hard, so it’s cool to be here,” Hubbell said.

Sound played an integral role in creating the mood during the play. The crunching carrots signaled Ray, a rapidly clicking pen was characteristic of Peter and the clink of metal necklace was associated with Lydia as she fidgeted with the jewelry.

These sounds often meant the actor was contemplating a difficult decision.

Each scene change was signaled by dimmed lights and the urgent, incessant clicking of a clock. The scene changes came suddenly – sometimes mid-conversation. The large timing clock hung prominently on the wall next to the pool.

The script in the play was also distinct. It was characterized by an almost dancing series of interrupted phrases in which actors would exchange short portions of sentences continually cutting one another off, but then picking up where they left off when it was their turn again.

Since the entire production took place on the pool deck, the conversations made the experience come to life.

The set and props were realistic and detailed. Stage manager, Camille Manley, a sophomore law in society and theater major, said she played a role in the organization of the production as well as putting out props.

One of her roles on the night of the show was to station the vomit bag and the fake blood so it was ready for the scene.

Prior to the show, Manley encountered some real blood.

“I’m bleeding all over my fingers and I have orange paint on my hands,” Manley said. “We were trying to make the vomit bag and I cut the scissor through my finger.”

Thanks to Manley’s efforts though, the show went off without a hitch.

“That was the best run the actors have ever given and I thought the audience, hopefully, they seemed to be really engaged in the story and responsive to the energy and the questions the play posed,” Mariah Sage, director and adjunct professor of theater at Quinnipiac, said.

Kevin Daly, director of the theater program and associate professor of theater, said he chose “Red Speedo” based on Sage’s recommendation.

Students who attended the play said they enjoyed the performance and marveled at the talent of the actors.

“I thought it was really put together and I really enjoyed the actors and the scenes,” Jack  Zemlanicky, sophomore computer science major, said. “I was really surprised at how much time and effort seemed to be put into the stage itself and how much the actors rehearsed.”

Miller said she was cast Labor Day weekend, so rehearsal for the play started right when school did.

She emphasized that students should come to the performances to support the hard work of their classmates.

“It’s incredibly important for students to come to the show,” Miller said. “It lets us show our art, what we’ve worked so hard on. We also cover super important topics in a lot of our shows.”

Daly acknowledged that the theater building and program are still growing but said student involvement is the only way to keep improving the program.

“We are growing fast, the theater program is pushing the boundaries of what we can do and in many ways we need more student participation to keep growing the way we want to,” Daly said.