Beyond the job description

Megan Taylor was sitting at a table at the front of her chemistry class Sept. 18, when she noticed her professor acting strangely.

“One of the students went up to ask him a question, and he just didn’t look OK,” Taylor, a sophomore health sciences major, said.

Taylor said the professor seemed to be fading in and out of consciousness. 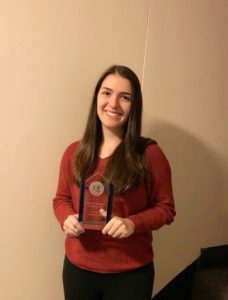 Taylor received EMT training over the summer so that she could work as an EMT in her hometown of Staten Island, New York, and her instincts to help others in an emergency kicked into overdrive. She monitored the professor’s condition and eventually instructed her roommate, who was also in the class, to call 911.

“I felt like I was probably the only one who had the training to do so,” Taylor said. “I just took charge and did it.”

Her roommate, Olivia Murphy, didn’t forget how Taylor had taken charge at a moment when the rest of the class was scared and confused. She nominated Taylor as Bobcat of the Month and on Oct. 6, Student Government Association (SGA) announced her as the winner.

Jamien Jean-Baptiste, SGA vice president for public relations, said the selection committee searched for someone who went beyond traditional expectations of a student.

“We are looking for someone that takes leadership on campus, that makes Quinnipiac a better place just by their presence, inspiring other people,” Jean-Baptiste said.

While the selection committee thought Taylor acted heroically, she said she was just doing her job.

“I’m just doing what I’m trained to do, but it’s awesome for them to give me this recognition,” Taylor said.

SGA members surprised Taylor with the award at the chapter meeting of her sorority Phi Sigma Sigma. She was given a $250 gift card to the bookstore and showered with balloons and confetti.

Jean-Baptiste said Bobcat of the Month is not entirely new to Quinnipiac. SGA hosted a similar program several years ago. He said they brought the idea back because it’s a way to recognize students who live the Creed.

The Creed is a promise to demonstrate the values of integrity, responsibility and academic excellence. All students recite the Creed at freshman orientation pledging to “Live the Legend.”

“We decided to incorporate (the Creed) because it’s kind of like after orientation it disappears and you don’t really hear from it again,” Jean-Baptiste said. “We wanted to really involve that entire thing into the selection so people are constantly reminded to live by the student body Creed and even go above and beyond it.”

SGA received over 70 nominations in the September applicant pool, but Jean-Baptiste said Taylor stuck out.

“I thought that someone that had that kind of character to step up and do that on a daily basis and have that commitment, I thought she would be the perfect person to be the first Bobcat of the Month to lay that groundwork for the rest of the submissions,” Jean-Baptiste said.

Murphy said Taylor’s character is deeper than that one instance in chemistry class. She said Taylor is involved in her sorority, president of the new club volleyball team and committed to her friends.

“She just gets along with so many people,” Murphy said. “It’s that personality of her being personable with people that really stood out.”

As for next month’s star Bobcat, Jean-Baptiste encouraged all students to submit nominations on DoYouQU.

Submissions that were not chosen for September will be added to a list and have a chance to win in future months.

Taylor said she hopes the next Bobcat of the Month will embrace what it means to live the Creed.

“Someone who is involved, somebody who takes pride in being a Quinnipiac student and just somebody who is really doing a lot for the community,” Taylor said.