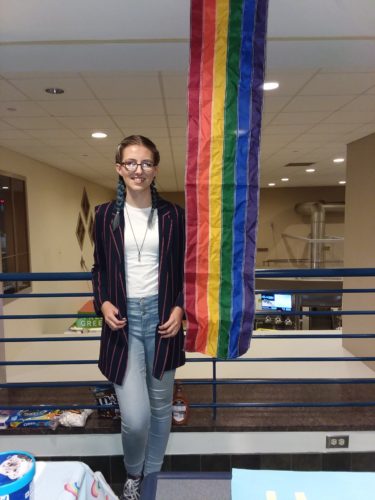 National Coming Out Day is a day for members of the LGBTQ community to celebrate and embrace who they are, and Quinnipiac students joined in on the festivities this year.

“When people come out, it takes a lot of bravery and it is often an emotional and scary event because you can only guess how the person you’re telling is going to react,” Lindsey Downey, president of Quinnipiac’s Gender Sexuality Alliance (GSA), said. “For some people, coming out isn’t an option, and for others, they might just not be ready to come out to people yet.” 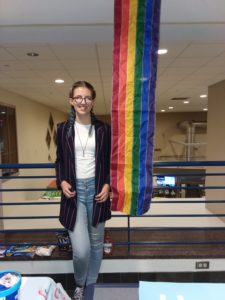 In the upper level of the cafeteria, the organization gathered to celebrate the occasion with ice cream sundaes, music, friends and the family that has been built within the GSA. All were welcome to attend, as members of the LGBTQ community were encouraged to remain strong and celebrate their identity while straight attendees were encouraged to identify themselves as allies of the community.

Austin Calvo, president of the Student Government Association, asserted that National Coming Out Day is indeed a day of celebration and pride.

“National Coming Out Day is an opportunity to empower people to come out,” Calvo said

Though he planned to come out on National Coming Out Day, his mom ended up finding out about his sexuality before the day. When he did come out officially, though, it had a considerable effect on his life.

“It just made me happier. Getting all of that off my chest and being open and honest about who I was was the best thing I’ve ever felt,” Calvo said.

GSA wanted to create a welcoming and supportive setting that encouraged a similar uplifting reaction and caring environment, according to Downey. Upon entering, attendees were greeted by a pride flag hanging from the ceiling near the ice cream. Members of the GSA were gathered around the flag as they doled out frozen treats and exchanged laughs and conversation, welcoming anyone seeking community or acceptance, which are key to supporting an individual coming out, according to Downey.

Attendees signed their names on a banner that showed their endorsement and support of the LGBTQ community – either as members or allies. The litany of names sprawled across the banner attracted others to sign and support the community in a safe environment. Attendees reclined at tables and on sofas enjoying ice cream, conversation and good company.

Oct. 11, was the 31st annual National Coming Out Day, which is the anniversary of the National March on Washington for Lesbian and Gay Rights in 1979, acccording to the Human Resources Campaign.

Downey said she was lucky to have had a supportive family and support system when she came out. She recognized that not all members of the LGBTQ community have shared a similar experience in coming out. The goal of the ice cream social, according to Downey, was to create a safe place where individuals can come out and be supported.

Downey said Quinnipiac still has work to do when it comes to being a safe and welcoming place for the LGBTQ community.

“I think that while Quinnipiac is pretty friendly and supportive of the LGBTQ community, there’s still a lot of progress to be made,” Downey said. “The LGBTQ community isn’t always very visible on campus, which makes it really easy to not take us into account when it comes to policies and how people act.”

Downey explained that the problem is less institutional and more a matter of culture – where the main aggressors are often students within campus. Downey asserts that Quinnipiac needs people to be more accepting and understanding towards the LGBTQ community.

Downey said that she has often heard derogatory terms in reference to the LGBTQ community at Quinnipiac and people refer to “something they don’t like as ‘gay,’ which is always upsetting,” Downey said.

Downey said much of the discrimination against LGBTQ people on college campuses cannot be punished, but that doesn’t make it hurt any less.

“It’s not against the code of conduct to stop inviting your roommate to dinner,” Downey said.

At first, Downey explained, she was more passive with her sexuality. She didn’t want it to be a “big deal.” Now though, she said she has fully embraced who she is.

Downey believes that through the increased presence and visibility of LGBTQ individuals, she can help change Quinnipiac’s culture and foster acceptance toward the community.

Though National Coming Out Day has passed, the opportunities to support the LGBTQ community have not. GSA will continue its celebration of LGBTQ history month with Spirit Paint Night on Oct. 16, at 8 p.m. in the dining hall. The group meets weekly on Wednesdays at 9:15 pm in Tator Hall 114.

To learn more, visit www.hrc.org/resources/national-coming-out-day or come visit the Gender Sexuality Alliance on Wednesdays at 9:15 pm in Tator Hall.