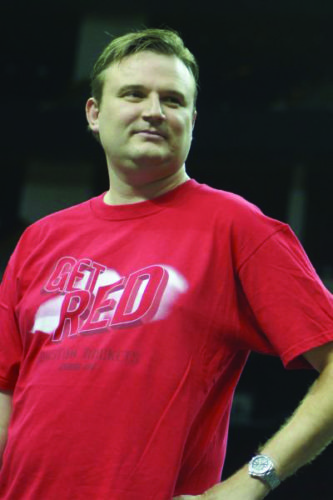 Seven words can be enough to ruin someone’s entire career.

Houston Rockets general manager Daryl Morey tweeted, “Fight for Freedom. Stand with Hong Kong,” on Friday, Oct. 4 and set off a firestorm that engulfed the NBA and China alike. As a result of the tweet, China has slammed both the Rockets and the NBA with threats and criticisms.

Not everyone is aware of the situation in Hong Kong. Residents of the city have been protesting since June against efforts to gradually integrate Hong Kong into China. In the past, the former British colony had operated under a “one country, two systems” deal that was set up by Deng Xiaoping, the paramount leader of the People’s Republic of China in the 1980s.

Now China is trying to force extradition laws and other Chinese traditions upon Hong Kong. Fearing a threat to their independence and democracy, Hong Kong residents have rebelled.

In other words, it is a delicate yet explosive situation. And Morey lit the fuse.

Morey deleted the tweet shortly after it was posted and apologized, but the damage was done. The Rockets were under attack for having a prominent figure in the organization express a political viewpoint about a foreign country. Many even argued that Morey’s lack of conviction worsened the situation. The way his tweet was rather vague, and the way he deleted his tweet also made him sound less genuine.

Some are calling for his resignation. I call bullshit.

Morey has assembled a playoff team every year as a Rockets executive outside of a three-year span from the 2009-10 season to the 2011-12 season. He brought star shooting guard James Harden to the Rockets and created the “true shooting percentage” statistic that is recognized and used around the league. Morey promoted the use of analytics in modern day basketball and is a big reason why the Rockets have been an offensive powerhouse in years past.

But it’s about more than his credentials. While some in the public are criticizing Morey for speaking up in support of the Hong Kong protests, the NBA is scrambling to mend fences with China.

Right now, the NBA preseason is taking place in China. Tens of thousands attend each game. China is already a big part of the NBA’s profits and having an overseas interest is difficult to manage. For example, it has taken the NFL well over a decade to garner the viewership they have in London, and even that is minimal. Given the projected growth in popularity in China for NBA basketball, the league has a major stake in maintaining this relationship.

The 15,992 Chinese fans that attended the game on Oct. 10 between the Los Angeles Lakers and the Brooklyn Nets were given Chinese flags to wave during the game in a movement of patriotism instead of any Lakers or Nets spiritwear. Brandishing Chinese colors in the stands is just the type of solidarity China wants to showcase. The post game conferences were canceled for the game, and there wasn’t any other media availability in China afterwards. It’s safe to say that China is not too happy with the NBA.

China’s consulate in Houston stated, “We have lodged representations and expressed strong dissatisfaction with the Houston Rockets, and urged the latter to correct the error and take immediate concrete measures to eliminate the adverse impact.”

Chinese companies may cut ties with not just the Rockets but also the NBA. Li Ning, a sportswear brand that legendary guard Dwyane Wade wore, announced that it has suspended its ties with the NBA. Anta, another sportswear brand that has worked with stars such as Klay Thompson and Gordon Hayward, announced it would suspend contract renewal talks with the NBA, according to Reuters. China also canceled the preseason game between the Rockets and the Dallas Mavericks in response to the tweet.

Meanwhile, the United States has also responded. Members of the United States Congress have asked NBA commissioner Adam Silver in the form of an open letter to cease all relationships with China until “government-controlled broadcasters and government-controlled commercial sponsors end their boycott of the NBA activities and the selective treatment of the Houston Rockets.” Keith Smith of Yahoo Sports is reporting that multiple teams fear “a scenario in which the cap for the 2020-21 season could drop between 10-15% due to the current situation between the NBA and China.”

Seven words. That’s all it took to make a multibillion dollar company bleed.

The NBA has a lot to lose if this damage festers. The branch that manages the league’s businesses, NBA China, has an estimated value of at least $4 billion, according to Forbes. Meanwhile, a man who simply spoke his mind may be sacrificed to save the NBA’s profits.

LeBron James doesn’t seem too sympathetic for Morey. He told reporters on Monday, “I don’t want to get into a word or sentence feud with Daryl Morey, but I believe he wasn’t educated on the situation at hand and he spoke. So many people could have been harmed, not just financially but physically, emotionally, spiritually. So just be careful what we tweet and what we say and what we do, even though yes, we do have freedom of speech, but there can be a lot of negative that comes with that too.”

James recognizes that freedom of speech is important, but the ramifications can be dangerous. Not everything is covered under freedom of speech. Still, this is a very fine line to cross. Morey did not tweet out hate speech, or anything that would warrant censorship.

Ironic, right? That controversial tweet was not even seen by the people of China on the social media platform. It had to be reported.

China is a communist country that does not allow freedom of expression. If Morey feels pressured to resign or, even worse, is forced to resign, the U.S. is no better than China. To the NBA’s credit, Silver has supported Morey.

“The NBA will not put itself in a position of regulating what players, employees and team owners say or will not say on these issues,” Silver said. “We simply could not operate that way.”

The commissioner is stuck between supporting freedom of speech and supporting the investments the league has made in China. Stating that the NBA is “not apologizing” shows that Silver is making the right choice by putting morals ahead of business.

Rockets owner Tilman Fertitta tweeted that Morey, “does NOT speak for the Houston Rockets” while maintaining that the team is, “NOT a political organization.” It’s clear that Fertitta wants to distance himself and the organization from Morey.

But regardless of what Silver or Fertitta says, there is pressure to relieve Morey of his duties. A pressure to do whatever it takes to re-establish relations and bring those businesses back.

It would be a slap in the face to Morey and everything this country stands for if this was to occur.

It is somewhat ironic that Yao Ming, arguably the best player to emerge from China, spent eight years with the Rockets. The legendary center could be used as a bridge between the Rockets and China without making Morey jump off that bridge into unemployment.

This should be the next step. However, Silver did note that Ming was “extremely upset” with the situation. Ming runs the Chinese Basketball Association, and would be vital towards lowering tension between the NBA and China. Mending the relationships between the NBA, Morey and Ming should be paramount, especially given Ming’s prestigious career.

Regardless of the future, Morey should not be fired for his tweet. Not only is there nothing wrong with expressing one’s opinion but supporting democracy and sovereignty is a noble cause. My only issue with the tweet is that he backed down when deleting it.

Seven words is all it took to jeopardize the NBA millions of dollars, but it should not cost Morey his job.