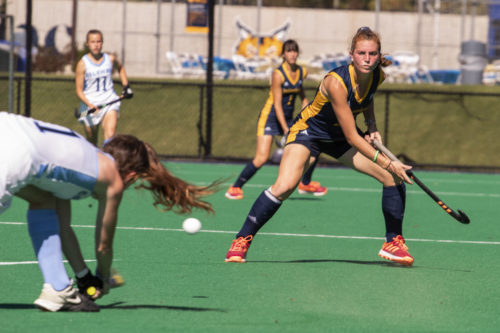 “Some nights we can look like the best team in the country, others we look like the worst,” Quinnipiac head coach Becca Main said.

This was one of those games that the Bobcats would want to have back. After an extremely hard-fought 90 minutes and two reversed goals, the Quinnipiac Bobcats field hockey team (3-9) lost to the Villanova Wildcats (5-6) by a score of 2-1. This is the third year in a row the Bobcats have lost 2-1 to the Wildcats.

Quinnipiac has now lost its last four games and have only scored three total goals in those games.

“We just don’t have enough people that can put the ball away,” Main said. “They scored that gorgeous corner but then we should have responded with three or four of our own.” 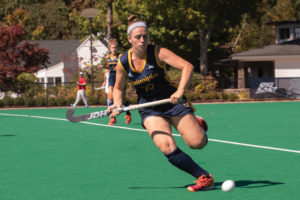 [/media-credit]The story of the season thus far has been the lack of scoring for Quinnipiac. The Bobcats got shut out in their previous game against No. 17 Boston College 4-0, and also lost the two prior to Liberty and Columbia, 5-1 and 2-1 respectively.

“Obviously our attack failed us,” Main said. “The should-haves are what keeps you up at 4 a.m., and have all season.”

The game began as an uphill battle for the Bobcats when Wildcats senior forward Megan Vermeil scored the first goal of the game almost immediately. There was a massive scrum in front when Bobcat freshman goaltender Hedda Biermann-Ratjen made the save, but Vermeil put home the rebound for the first goal.

However, Quinnipiac quickly responded to the goal. Just two minutes after Villanova scored, freshman forward Julianna Cappello scored the equalizer for the Bobcats. It was the second goal of her young career, but Cappello seemed like she’d been there before.

“The endline is your friend,” Cappello said. “I usually like to play on the right because it’s my strong side, so I was just using my skills in the corners to create chances.”

Even though the start of the game was hectic, those goals were the final goals of the first half. The remainder of the half had a lot of defensive plays and passing in the neutral zone, since neither team gave the other an inch.

However, in the second half, play opened up considerably. Both teams got chances to break through, and both would, or so they thought. The Bobcats scored again and thought the 2-1 lead was in their favor this time, but due to the ball hitting multiple Quinnipiac feet, senior forward Valerie Perkins’ goal call was reversed. 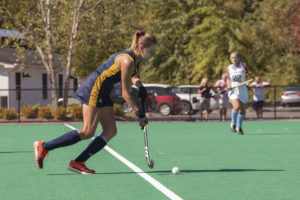 [/media-credit]“I think it was the right call,” Cappello said. “Obviously it would have been huge if it counted, but unfortunately it didn’t.”

Once the call on the field was changed, there was a sense of a momentum switch in Hamden. Up until that point, Quinnipiac’s defense had been dominant since conceding a goal. The changed call seemed to drain the Bobcats, and shortly after, Villanova scored again.

This time it was senior forward Lydia Sydnor, and the Bobcats wouldn’t have a response to that one. The clock would drain out following the goal, and Villanova beat Quinnipiac 2-1 for the third time in three years.

Main will go for her 200th win for the fifth-straight game when the Bobcats have a short turnaround and travel to the University of Maine this Sunday, Oct. 13, to play the Black Bears at 12 p.m.