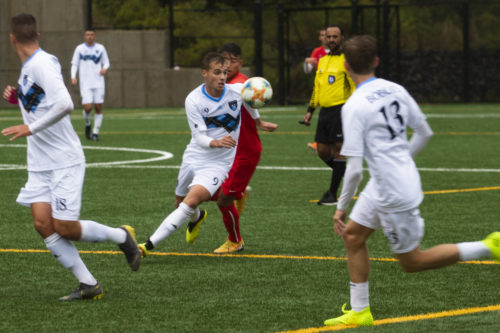 After 90, physical and grueling minutes in the cold, pouring rain, the Quinnipiac men’s soccer team defeated Marist 5-3 at the Quinnipiac Soccer and Lacrosse Stadium.

The game started out chippy, and that theme carried throughout the whole match as both teams would go on to combine for a total of nine yellow cards and three penalty kicks.

“We always want to take the emotion out of the game, but soccer is an emotional game, it’s a passionate game … sometimes that brings out the best in people, and the worst,” Quinnipiac head coach Eric Da Costa said. “For us, it was just about managing those emotions…not getting too high and certainly not getting too low, trying to ride the wave of emotion a little bit.”

It took almost 40 minutes before for the first of many goals was scored, but Marist junior defenseman Huib Achterkamp chipped one off the bar on a penalty kick after an Evan Hughes yellow card.

[/media-credit]Quinnipiac came storming back and fired off a series of offensive attacks to record the equalizer before the half. Fortunately for Quinnipiac, freshman forward Tomas Svecula smoothly potted the tying goal on a penalty kick three-and-a-half minutes after Marist took the lead.

Less than a minute later, Quinnipiac capitalized on a corner kick from freshman forward Brage Aasen, as senior midfielder Romain Daniellou found the back of the net to give Quinnipiac a 2-1 lead heading into the second half.

“Obviously, you go into the break with the lead, that you can readjust some things and come out with a positive mindset,” Da Costa said. “You could always come out and be a little flat and that’s something we were concerned with. It was a bit emotional after the penalty.”

The second half started out more physically than the first as four more yellow cards were handed out within 15 minutes.

“I was happy with how we came out in the second half we decided to dictate the tempo and the pace,” Da Costa said. “We could have done a lot of things better, not conceding goals on set pieces, really made the game more difficult than it needed to be.”

After several minutes of back-and-forth play, Quinnipiac had a crucial turnover in its own end, leading to Marist’s second lead of the game as senior midfielder Samad Bounthong finished off a feed from Gavilanes.

Quinnipiac picked up its offensive play and continuously stormed up the pitch in waves, attempting to find an equalizer. Eventually, its luck would prevail, as Aasen was not done crossing dimes into the box off corner kicks. Senior defenseman Conor McCoy connected with the cross to tie the game back up. 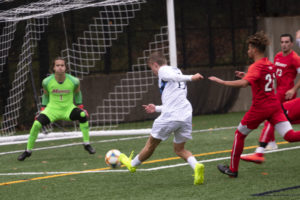 [/media-credit]“[I’m not looking] for a person,” Aasen said. “Just a specific area where I want to hit it. And on both corners, I hit it where I wanted to.”

Minutes later, Marist’s senior midfielder Michael Lorello was called for a foul in his team’s box and given a yellow card. Quinnipiac gave its captain, junior midfielder Simon Hillinger, an opportunity to give his team a late lead. Hillinger delivered big time and gave Quinnipiac a 4-3 lead with fewer than 15 minutes remaining.

With about five minutes to go, freshman midfielder Domen Bozic intercepted a Marist pass and delivered a perfect lead ball to senior forward Eamon Whelan, who deposited the deathblow and gave Quinnipiac an insurmountable 5-3 lead.

“Obviously, what transpired to end the game was a little bit crazy, but history has always been that way between these two teams,” Da Costa said. “Two aggressive teams that want to play on the offensive side, try to dictate the game. It made for a little bit more exciting than we wanted to, I’m sure the fans loved it.”

The next game for Quinnipiac pits them against another MAAC foe, when the team travels to Niagara this Saturday, Oct. 12, at 7 p.m.