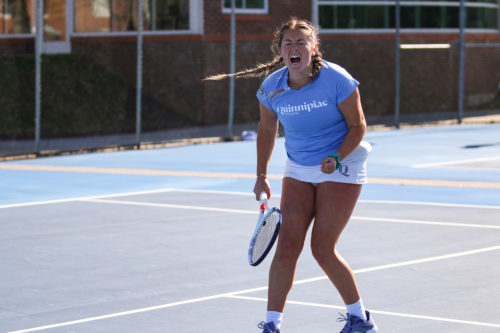 It’s been 164 days since the Quinnipiac women’s tennis team lost in the 2019 MAAC Championship to Fairfield.

A win would’ve given the team its sixth straight MAAC title and senior captain Layla Rodriguez her third title in three years.

To this day, the loss frustrates Rodriguez.

“To be honest, it’s like salt on the wound that it wasn’t three in three, but it’s nice to say that I have two wins,” Rodriguez said. “It’s really cool to say that I’ve technically made four NCAA match appearances ’cause I’ve played doubles and singles in the two appearances that I made.”

Since the loss, Rodriguez has cemented herself in the record books with her 100th career match win. She’s now up to 105 wins in her career with the majority of her senior season still ahead of her. 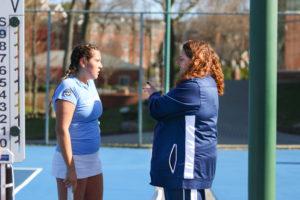 [/media-credit]Quinnipiac head coach Paula Miller recruited Rodriguez to the team in 2016-17 and knew right away that she would reach these heights.

Rodriguez was named to the All-MAAC First Team in No. 5 singles and No. 3 doubles as a freshman. She tallied 17 singles wins and 26 doubles wins.

She made history when she became the first Quinnipiac women’s tennis player to win MAAC Rookie of the Year.

She saw similar accomplishments in her sophomore year. She was named to the All-MAAC First Team for No. 4 singles and won 30 games, 15 wins both in singles and doubles.

In her first two years, she helped the team win the MAAC Championship – its fourth and fifth in a row.

Even with so much early success, Rodriguez has grown tremendously, more as a person than a player.

“She’s very grown up for her age, both of my seniors are,” Miller said. “I’ll miss having that kind of adult supervision to help out with everything.”

Rodriguez and Amy Zammarieh are the only two seniors on the team this year. They take on leadership roles within the team along with junior captain Payton Bradley.

Rodriguez is younger than one of the team’s juniors and the same age as another one. This, however, doesn’t stop Rodriguez from being a mature leader for the team.

She’s a mentor to the youth and even the upperclassmen on the team. Zammarieh has been by Rodriguez’s side since freshman year – the only person to be with Rodriguez that long – and has learned the art of perseverance.

“Despite all the injuries she’s had over the years with her foot, she’s really persevered in the match as well as outside of the match and really just pushed herself to the limit,” Zammarieh said. “[She] always thought about the team before she could ever even think about herself and that’s selflessness.

“Consistency in terms of just fighting back is really what I took away from her and I think is something she portrays as a leader and is something I admire about her since freshman year, something I try and mimic.”

Injuries have taken a toll on Rodriguez, but that isn’t obvious given her 105 wins. She has a cyst in her foot but opted against surgery since it would take about a year to recover. 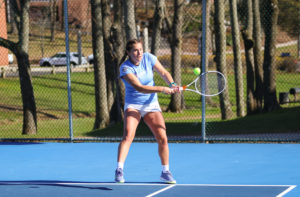 [/media-credit]She said she had tendinitis in her arm and a “bad history” with her back, knocking on wood – her head in this instance – with hope that she’s got her back issues under control.

Even with an injury-riddled career, Rodriguez finds the positives in her years at Quinnipiac.

She’s in the 3+1 program studying biomedical marketing. She got her bachelor’s degree last year after three years and will graduate with her master’s degree this year.

The 3+1 program seems like a lot of work, especially for the captain of the tennis team. Rodriguez disagrees.

“Well, I know a lot of people say that the 3+1 is very difficult, but I feel like my high school definitely set me up very well,” Rodriguez said. “I took a lot of AP classes, so I came in with a lot of AP credits.

“And also, I’m a very realistic person and I get stressed really easily, so time management is like my number one. So definitely, if you can just manage your time, manage your resources, you can have time for anything.”

As a member of the 3+1 program, Rodriguez said she has to go on immersion trips. During her sophomore year, she went to Nicaragua with Matthew O’Connor, the dean of the School of Business. She’ll be visiting Israel with O’Connor this winter.

Even before enrolling at Quinnipiac, Rodriguez has loved meeting people from other countries. She’s played in a couple international tournaments in California, her home state, and thought it was fun to learn different rules.

One rule she mentioned in particular is that you cannot wear branded clothing if the logo is too big. If it exceeds a certain size, it has to be covered.

This statement holds true during Quinnipiac matches, not just at international tournaments. Rodriguez is the loudest player on either team, cheering on her teammates nonstop. 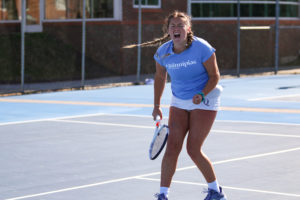 [/media-credit]“She’s always very supportive,” Zammarieh said. “Once in a while, if we’re down or if we’re just getting in our heads, she has the ability to pull us out of it. She’s off on the side and she could say something funny and we would laugh and then that would lighten the mood. It would help us to refocus.”

Rodriguez always put the team before herself, and that showed with her fun, light-hearted attitude. She’s taking this mentality into her senior year to make sure she enjoys her final season at Quinnipiac.

She knows it’s almost time to graduate – again – and made it known that the relationships she made here are far more important than a win or loss.

“Nobody’s going to remember the wins or the losses,” Rodriguez said. “It’s the long-term effects of the team chemistry and the dynamic that I think will be everlasting.”

Rodriguez will walk away from Quinnipiac in the spring of 2020. She’ll forever be among the winningest women’s tennis players in program history.

“I’m the first one in my family to play a sport, so I know I’ve exceeded,” Rodriguez said. “My goal was to make the JV team in high school, so I think I’ve exceeded that.”