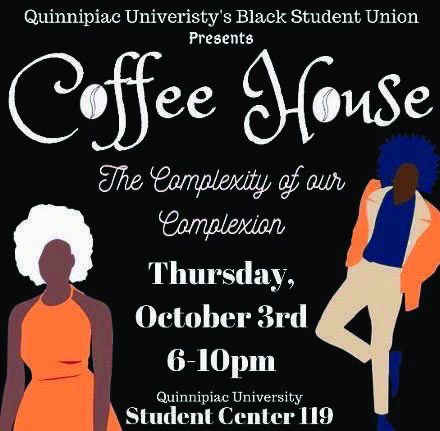 Discussion is important for any community to grow closer and stronger. This is no different for the Black Student Union (BSU), which opened a dialogue about issues that affect its community.

The Black Student Union came together on Thursday, Oct. 3 to hold a coffee house in Student Center room 119. A traditional coffee house includes performances of poetry or songs, but this coffee house was a little different. It was a discussion-based forum for members of the black community on campus to discuss the “complexity of their complexion” and other topical issues that affect their community.

According to Andrew DePass, representative of the BSU for the Multicultural Student Leadership Council, one of the prevalent topics of the night was the collective reactions surrounding the sentencing of Amber Guyger. Guyger, a white police officer, shot an unarmed black man, Botham Jean, in his own home after she mistook his apartment for her own in 2018.

“We thought there was no need for the judge to go ahead and do that,” DePass said. “We were wondering, you know, what kind of message does that send?”

Kemp has since had a complaint filed against her with the Texas State Commission.

Another topic the group discussed was Patricio Manuel, the first transgender black professional boxer. Manuel began fighting professionally in 2018 and is now the face of Everlast, the most popular company for boxing gear.

They also talked about a recent controversy surrounding a child model for H&M. Pictures of one of their models, a young black girl, went viral after some believed that her hair was “undone” compared to white models and was disrespectful to both the girl and the black community.

“It’s supposed to be a relaxed way to connect with the community,” Amanda Etienne, the Director of Programming for the BSU said.

Outside of the discussion, there was an opportunity for some to perform original songs and short poems.

The BSU’s mission is to foster a sense of community dedicated to the celebration of black culture.

BSU meets bi-weekly on Tuesdays at 9:15 p.m. in Echlin room 207. It emphasizes the importance of facilitating a community that is open to black students on a predominantly white campus and expressing views on important issues within that community.